Pinion Primer: How to Achieve Proper Pinion Angle and Why it Matters 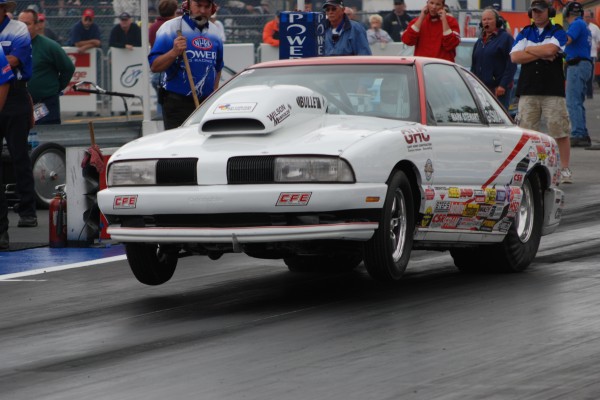 The truth is, pinion angle can move significantly and well tuned cars are setup to compensate. Look at how hard this well sorted Super Modified car is hitting the tire. It didn’t get that way with a wayward pinion.

This illustration is an exaggerated view of what pinion angle is all about.

With a modified stock style four link (triangulated), the upper bar adjustment on a triangulated four-link is for two purposes only--to set the pinion angle and to center the rear-end (from side-to-side) in the car.

(Source: Jerry Bickel Race Cars): Bickel goes on to show that with a race-style four-link, you’ll most likely need a pinion angle nosed downward of 1 to 2 degrees in order to obtain a pinion angle of zero while under power.

(Source: Jerry Bickel Race Cars): This illustration from Jerry Bickel shows an easy way to check pinion angle: Simply use a magnetic angle finder on the pinion and the driveshaft to come up with the angle number.

Using a high performance car as an example, consider the rear suspension in the car when it’s under power and it “wraps up.” Here, the pinion is driven upward (out of whack). Rear axle and driveshaft manufacturer Mark Williams points out that the optimal angle for any driveshaft to run at is 1/2 degree, where many vibration and frictional problems are non-existent. In order to minimize power loss and vibration in an offset configuration, the pinion centerline and the transmission centerline need to be parallel. In general, the largest angle for racing applications should be 2 degrees and the centerlines should be parallel within a few 1/10 of a degree. If the chassis has some type of a parallel traction bar system the angles should remain parallel throughout the suspension travel.

“There should be no pinion angle (0-degrees) on acceleration, or vibrations, power loss, and universal joint breakage can result,” said drag race chassis builder Jerry Bickel.

Keep in mind that with suspension movement the operating angle will increase, but should not exceed a few degrees. If the parallelism of the centerlines changes, the U-joints travel at uneven operating velocities, causing vibration (this is the same problem induced by poorly phased end yokes). This vibration is hard to distinguish from an unbalanced driveshaft.

To ensure that the pinion is in the correct location under power, it is typically set nose down static. Some of the most common information (or perhaps misinformation) on setup was derived from the very early years of Mopar racing. The very early Chrysler cars had a very thick spring and were subject to wind up. In an effort to make allowances for this wind up, the pinion was dropped down a few degrees. This was done to keep the center lines running close to parallel when under power. If the car has OEM style rubber suspension bushings, a pinion angle of -3 to -4 degrees is likely more appropriate. This nose-down attitude was originally done in order to compensate for the compression of the rubber bushings.

In order to set the pinion angle on a four-link car with adjustment capability (for example, a drag race four-link), you lengthen or shorten one or both of the upper four-link bars to move down or up. On a triangulated four-link (factory GM or Ford), the upper bars are also used to set the pinion angle (by adjusting both uppers the same direction and same amount). If the vehicle is equipped with leaf springs, then you can use wedge-shaped aluminum shims to move the pinion up or down. The wedges effectively rotate the pinion upward or downward depending on which way the wedge is facing. Summit Racing sells Lakewood wedge kits in two-degree and four-degree versions for passenger cars and a wider selection of sizes for trucks. The shims are designed to sandwich between the rear-end housing perches and the leaf springs. See the Summit Racing catalog for more examples (we can’t list them all here–there are over 150 different examples). You can also buy rear block kits engineered with a taper to move the pinion up or down.

Jerry Bickel also tells us that the pinion angle should be checked and adjusted any time there are changes in the chassis that have an effect upon the ride height or the length and location of the suspension link bars. Jerry’s advice is applicable to other applications too, but prior to setting up the pinion angle in a race car, Bickel points out that four-link instant center is set, the rear-end is aligned, the chassis is at correct ride height, the weight distribution is set, the tire rollout is checked, and the tire pressure is set.

The other thing you should keep in mind when it comes to the driveshaft is critical speed. Critical speed is the speed at which a spinning shaft will become unstable. This is one of the single largest factors in driveshaft selection. When the whirling frequency and the natural frequency coincide, any vibrations will be multiplied–so much that the shaft may self-destruct. Another way to think of this is that if a shaft naturally vibrates at 130 times a second, and one point on the shaft passes through 0 degrees 130 times a second (7,800 rpm) then the shaft has hit a critical speed.

There are several ways to raise the critical speed of a driveshaft. You can make it lighter, stiffer, or increase diameter without increasing weight. This is the reason carbon fiber makes a good driveshaft. It is stiff and light and can be made to any diameter or wall thickness. Aluminum has a higher critical speed compared to steel (same diameter and length shaft) but it is not quite as strong as steel. Steel, with its good strength characteristics, will have a lower critical speed. Because of this, it’s important to check with a driveshaft manufacturer before you decide upon a specific driveshaft for a specific application.

Whether it’s a 16-second low rider, swamp taming four-wheeler, or 8-second door-slammer, getting the pinion angle right is critical when it comes to delivering power to the rear wheels. For a closer look, check out the accompanying illustrations and photos above.

8 responses to “Pinion Primer: How to Achieve Proper Pinion Angle and Why it Matters”