Nut Case (Part 1): A Guide to Choosing Fasteners for Your Hot Rod 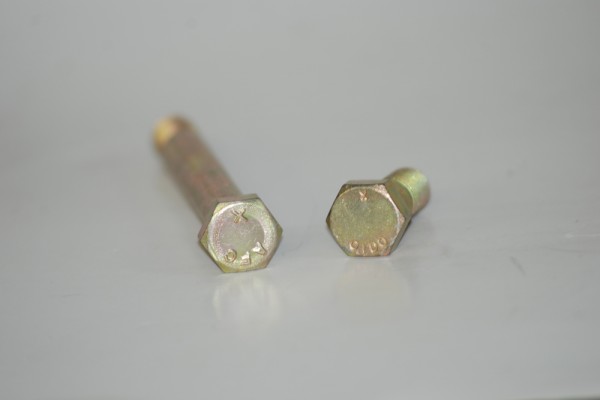 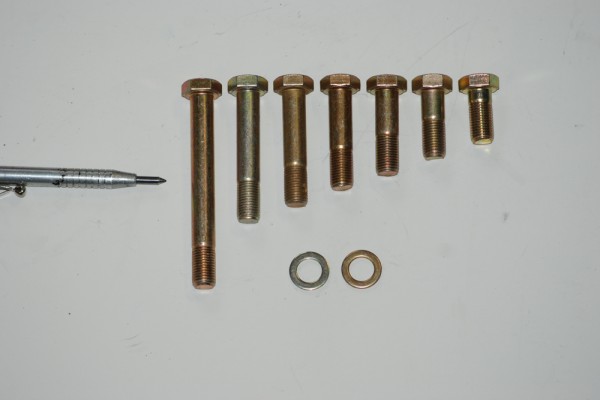 The head markings on aircraft bolts can vary according to the manufacturer, but there are some similarities. You’ll often find an "X" or an asterisk along with a name. Corrosion resistant (stainless steel) bolts are typically identified by one raised dash on the bolt head. NAS bolts have a higher tensile strength and they can be identified by a head that is "cupped".

The overall length of a bolt is important. There shouldn’t be more than 1-thread inside a given bolthole. Aircraft mechanics states that the grip length should be equal to the material thickness that is being held by the bolt or slightly longer. A washer can be added under the head if the bolt is slightly too long.

There’s something troubling about seeing automotive nuts, bolts, and other fasteners that have been chosen simply because they look good. After all, the nuts and bolts used to stick parts together onto your hot rod or truck are absolutely critical.

For fasteners that work (and work well), look no further than the aircraft industry—particularly the smaller sizes (7/16-inch and under). Low-grade hardware just isn’t going to cut it for airplanes and jets, and it shouldn’t be used on custom-built cars either.

So what makes the hardware used in airplanes so special?

For starters, let’s compare a common hardware bolt to an aircraft-grade bolt. Typical steel bolts from your local hardware store are manufactured from low carbon steel that has a low tensile strength, typically in the neighborhood of 50,000 to 60,000 PSI. A bolt such as this bends easily and offers little or no corrosion protection. A similarly sized aircraft grade bolt, however, is made from corrosion resistant steel and is heat treated to a strength that can exceed 125,000 PSI.

Now that we’ve established why aircraft bolts are superior, let’s take a closer look at how they’re categorized. The same AN number applied to the hoses and hose ends in your Summit Racing catalog also applies to nuts and bolts. This AN sizing was developed by the US Military as a standard way to identify and categorize things like hoses, hose ends, and fittings. This standard became “Army-Navy” or “AN” and evolved into MS or “Military Standard” and NAS or “National Aerospace Standards.”

Together, these military-based standards provide a universally accepted method of identification for components such as hoses or hardware. Before you become confused, there are any number of aircraft hardware items that have both an AN number and a MS number. These numbers are used interchangeably to identify the exact same pieces, and a cross reference exists to help compare these two numbers.

Typical bolts used in an airframe range from AN3 through AN20. Each fastener has a hexagon shaped head (although there are NAS fasteners with 12 point heads) and a shank that fits into a given hole diameter. The unthreaded portion of the bolt is called the “grip” while the shank is threaded on the end. The diameter of a bolt is the grip width measurement.

The shank of a bolt can either be drilled to accept a cotter key or it can be un-drilled. It is also possible to purchase an AN bolt that has a drilled head. This allows the bolt head to accept a piece of safety wire. The specific size, material and other specifics of an aircraft bolt is identified by the AN number. For example, you might see: AN6-12A. Here’s what that measurement means:

In translation, the sample above is a 6/16-inch—or a 3/8-inch diameter—AN bolt that is 1-1/4 inches long measured from just under the head to the tip of the shank. It’s important to note that if the dash number that defines the length of the shank (12 in our example) is made up with two digits, the first digit is the length in whole inches while the second number includes the length in additional 1/8-inch increments. That’s how we arrived at the 1-1/4 inch number for our shank length.

The bolt has an un-drilled shank, which means it is not configured to accept a cotter key. If the letter “C” follows the AN designation (which would read “ANC”), then the fastener is manufactured from stainless steel. If the letter “H” followed the AN (which would read “ANH”), then the head of the bolt (not the shank) is drilled to accept a safety wire.

In a typical light aircraft airframe, you’ll seldom find a fastener that’s larger than AN8, also commonly referred to as -8AN in automotive applications. However, there are some limited locations where larger fasteners are found (all the way up to -35 AN). Likewise, you’ll seldom find bolts larger than 1/2-inch diameter, or -8AN, in the chassis of a car, aside from maybe a few suspension members.

As far as bolt length, aircraft construction practice suggests that the length of the bolt must be sufficient to insure no more than one thread is actually found inside the bolt-hole. This figure is the grip length of the bolt and it is measured from below the head to the point where the threads begin. The grip length should be equal to the material thickness that is being held by the bolt or slightly longer. A washer may be used if the bolt is slightly longer. A piece of welding rod or safety wire can be used to measure the length of the hole.

In part two of Nut Case, we’ll look at some of the aircraft-quality hardware available to properly secure your bolts and fasteners.

3 responses to “Nut Case (Part 1): A Guide to Choosing Fasteners for Your Hot Rod”