Ironically, muffler manufacturers have created a lot of noise and confusion when it comes to exhaust technology. Although muffler designs can be broken down into distinctive categories—chambered, turbo, glasspacks, etc.—muffler makers are quick to tout the benefits of their own, unique innovations that make these designs better.

Two of the more popular and proven muffler innovations are Corsa’s Reflective Sound Cancellation and Flowmaster’s Delta Flow Technology. Both have helped create a distinctive performance tone while reducing interior noise and fostering maximum power. But each has chosen a different (exhaust path) to get the job done.

We’ve put together this brief overview of each to help you understand how the technology works. 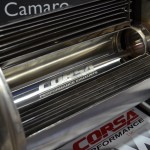 The name Reflective Sound Cancellation refers to the way sound pressure waves are routed within the muffler. In Corsa’s design, unwanted low frequency sound waves are diverted through specially designed channels (see Figure A below) and then reflected, or reversed, 180 degrees into each other (see Figure B). This process causes the sound waves to effectively cancel each other, eliminating the low frequencies that cause the dreaded “exhaust drone.” It’s the same out-of-phase wave cancellation technology used by electronics companies in devices such as noise-cancelling headphones. 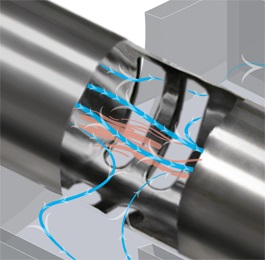 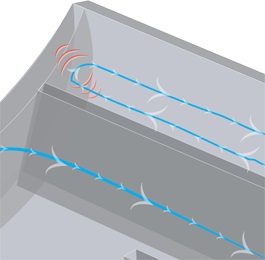 Unlike many chambered mufflers, which use baffles to reduce sound, Corsa utilizes a straight-through design with no restrictions. This straight-through configuration allows Corsa systems to reduce backpressure, maximize horsepower and torque output, and produce an aggressive sound under acceleration—all without the drone at cruising speeds. Each muffler is further tuned using exacting acoustic and thermodynamic formulas. The final design is determined using real-time spectrum analysis equipment to analyze actual interior sound at idle, acceleration, and cruise. By adjusting the size of the 360-degree air gap and the length of the pulse channels within the muffler, each muffler is fine-tuned for the specific vehicle.

Introduced in 1983, Flowmaster’s Delta Flow technology was also developed to cancel out exhaust noise. However, Flowmaster engineers took a different route than their Corsa counterparts, utilizing a chambered design instead of a straight-through configuration. This design gives the mufflers a distinctive performance growl which is unique to Flowmaster. 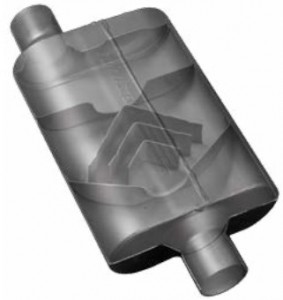 Unlike RSC, which reflects and reverses unwanted sound waves 180 degrees, Delta Flow technology incorporates a series of carefully spaced delta-shaped baffles to separate the sound waves (see left). These baffles route the separated sound waves in such a way that they re-collide with one another at precise angles, although not at 180 degrees. This partially cancels out unwanted noise, and the baffles provide additional noise reduction.

So which one is better for your ride?

Both exhaust technologies have proven effective at maximizing performance. Most often, muffler preference comes down to your idea of what performance should sound like.