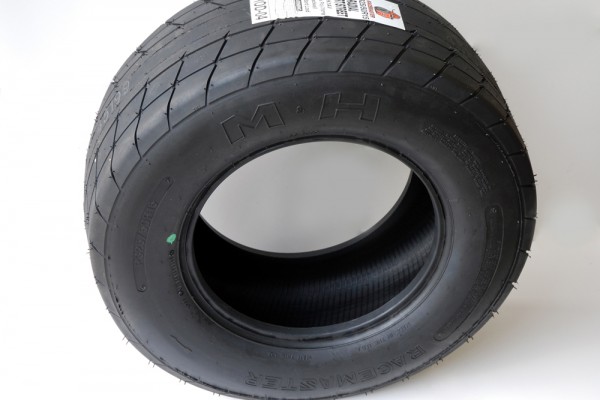 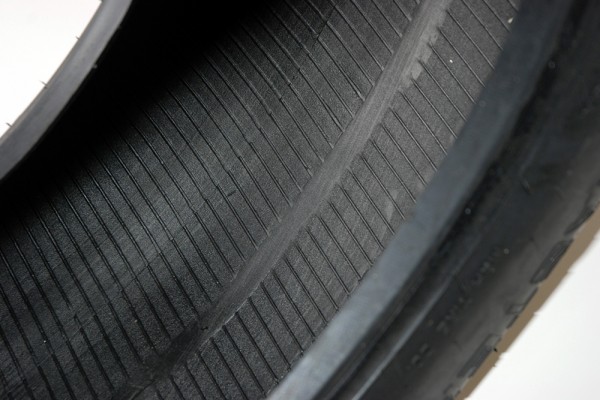 This M&H Racemaster drag radial has tread grooves because many street car racing organizations mandate them. But those grooves aren’t there just for looks. M&H tested a wide variety of groove configurations, and found the groove pattern shown here provided the best performance and overall reliability.

When you dig into the specs for drag radials, you’ll often find some are heavier than an identically sized slick. There are two reasons for that: DOT highway use requirements and vehicle weight. Drag radials require more belt material to meet DOT regulations and support heavier “street legal” race cars. This tends to stiffen a tire’s sidewall and add weight.

The majority of bias-ply DOT race tires are designed for use with inner tubes. Drag radials do not require them (this is noted on the tire label). It is important to remember that drag radials tend to rotate (slip) on the wheels at recommended tire pressures. That’s why most of the really fast guys use beadlocks or wheel rim screws to keep the tires from rotating on the wheels.

The sidewall of a drag radial has important information: maximum tire load (2,450 pounds for this M&H Racemaster), side wall construction, and tread construction.

Some racing organizations require using tires with a visible DOT mark for their street tire classes. Since this is a directional tire, the sidewall has an arrow that points in the direction of tire rotation.

Manufacturers can offer upwards of a dozen tire sizes for various car combinations. When searching the Summit Racing catalog or website for drag radials, don’t go by the nominal size (the tire shown is a P325-50R15). Tires of the same size from different manufacturers are often not the same dimensionally. Always check published dimension charts to compare tires. If you are buying tires in person, an old fashioned tape measure will help you compare tires.

Weight is also important when choosing a race tire. The M&H tire shown here is actually considerably lighter than many others of the same size. A lighter tire can be an advantage at the track, where every ounce of weight can make the difference between winning and losing.

Back in the early 1960s, the best tire you could get for a street/strip car was the Atlas Bucron. The Bucron was basically a retread bias-ply tire with a stickier tread compound. A fast street machine was hard pressed to break into the fifteens with a set of Bucrons, but they were the only DOT-approved tires that worked at the track (sort of).

Today, there are plenty of street-legal cars running eight-second ETs, and more than a few that have cracked the six-second zone on relatively small DOT-legal rubber. Many street car drag racing classes mandate DOT-approved tires, and some even mandate radial tires. That places a heavy burden on tire manufacturers interested in developing drag rubber that can hook up massive horsepower and meet DOT requirements for street use.

Weight and the DOT

At first glance, a drag radial tire looks like a slick with some grooves carved into it. But a DOT race tire must address factors a slick does not. One factor is vehicle weight. It’s not uncommon for an “Outlaw” P275-60 drag radial class car—one that can run sevens in the quarter-mile—to tip the scales at 3,000 pounds or more. Race-only slicks can be made as light as possible to help reduce wheel and tire mass in an effort to lower elapsed times. But building a tire to support a fast, heavy car and meet DOT highway use requirements means building a beefier tire heavier than a typical slick.

When shopping for drag radials, compare tires based on published dimensions rather than the size shown on the sidewall. For example, our M&H Racemaster P325-50R15 tire is actually slightly smaller than the same size Mickey Thompson ET Street drag radial, except in circumference:

Tread compound is a major factor in choosing the proper drag radial. Tire manufacturers offer various compounds that range from slick-soft to harder, more street-oriented types. For example, M&H Racemaster offers five compounds (#8, HB11, #703, #704, and #20, softest to hardest). The softer the compound, the stickier the tire. But softer compounds can compromise the price of tread life, especially if you put any kind of highway mileage on them.

Recommending operating air pressure for drag radials isn’t easy since there are so many variables involved. Weight distribution, transmission type, chassis setup, wheel size, and other factors have an effect upon operating pressures. Many racers feel that less is better with regard to air pressure, but drag radials seem to respond better to higher pressures. Higher air pressure improves elapsed times and helps stabilize the car as it goes down the track.

Here are M&H’s recommended baseline pressures for drag strip use, based on tire diameter:

Mickey Thompson says its ET Street drag radials should not have less than 11 psi of air pressure for racing use. For tire sizes smaller than P275-50R15, pressure should be between 12 and 16 psi. Larger tires (P295 and up) should have air pressure set between 11 and 14 psi.

The type of burnout you perform is related to your tires’ compound. M&H offers this advice when using its HB11 compound drag radials:

“A hard burnout is not necessary. For the first pass of the day, make a light to moderate burnout. After that, a light burnout should suffice. Continue the burnout until the engine starts to pull down. A dry hop after the burnout isn’t recommended. For a stick shift car, perform a light burnout, haze the tires and stage immediately.”

Mickey Thompson says the tread compound used in the ET Street Radials is designed to heat quickly and does not require a heavy burnout. A dry hop after the burnout is not recommended.

Drag radial tires are much the same as slicks when it comes to tire life; it can vary depending on the car. According to the experts, inconsistent 60-foot and 330-foot times are caused by tread wear or carcass breakdown. That’s a signal it’s time to change tires. Disappearing tread grooves are another sign it’s time to buy new rubber (various sanctioning body rules often stipulate that some tread must remain to be legal). A good rule of thumb is to inspect your tires carefully after 30 passes. If your car is very quick, the tires should be inspected more frequently.

Keep in mind that drag radials are engineered from the ground up for racing use. They are intended for use on dry pavement only and aren’t really suitable for extended highway use. That said, modern drag radials also hook with a capital “H.” And that’s what it’s all about, isn’t it?

10 responses to “Drag Radials 101: What You Need to Know About Drag Radials”

The Top 25 OnAllCylinders Tech Stories of the Past 10 Years