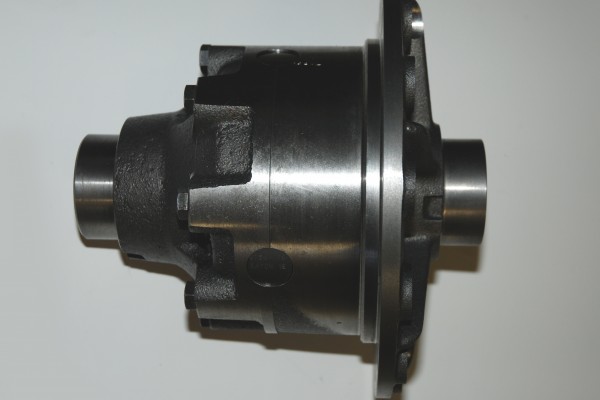 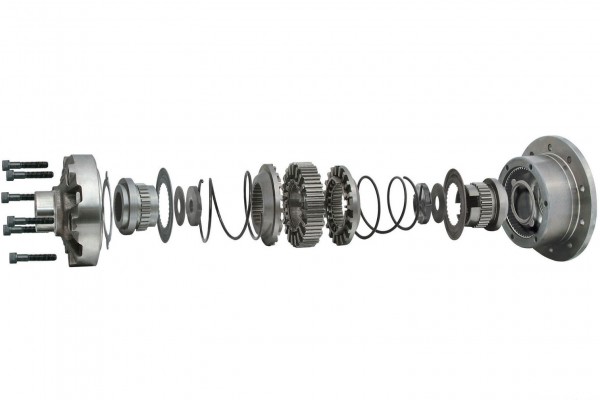 Here’s an exploded view of a Detroit Locker. From left to right, the primary bits are the side gears, outer springs, driven-clutch assemblies, spider assembly and center cam. The center cam is held in the spider assembly with a snap ring, but it is free to rotate.

This Detroit Locker for a Dana 60 is set up for 35-spline axles. Eaton does not recommend synthetic lube—you can use any quality petroleum/mineral based rear axle lube. Extra friction additives or modifiers are not required.

As noted in the text, you certainly can operate a Detroit Locker on the street. It locks up when operating in a straight line or if the wheels are spinning, which means power is transmitted to both wheels. In a turn, the unit unlocks for the wheel turning the fastest. Although this Dana 60 differential is a modern Eaton “soft locker,” it will still make noise on the street.

The Detroit Locker is an automatic locking differential that is designed to lock both wheels of the rear axle together when torque is applied. It acts much like a spool that solidly connects both wheels together. In a turn, the unequal speed of the wheels forces the Detroit Locker to disengage. Simple and effective.

The Detroit Locker was initially called a “Thornton NoSPIN Differential.” Ray Thornton patented it in 1941 as device for use in six wheel (tandem drive) truck applications. The NoSPIN was manufactured by the Detroit Automotive Product Corporation and was used on American military vehicles during World War II.

After the war and into the 1960s, the Thornton NoSPIN was original equipment on light and medium duty trucks. That’s right about when it got the Detroit Locker nickname—and when racers and high performance enthusiasts started to take an interest in it. They used the Detroit Locker on everything from road racers to NASCAR roundy-rounders and land speed record cars. In the late 1960s, some Ford performance cars had the Detroit Locker as a factory option. And to no one’s surprise, the Detroit Locker was found in cars at virtually every drag strip in the nation.

A Detroit Locker’s major internal pieces are the side gears, outer springs, driven-clutch assemblies, spider assembly, and center cam. The center cam is held in the spider assembly with a snap ring, but it is free to rotate. The spider assembly takes the place of spider gears found in a conventional open differential.

The key to the unit is the series of teeth found on the spider assembly and the driven clutches on either side of the spider. The driven clutches ride between the side gears, which are splined to fit the axles and turn at the same speed as the axles. When a vehicle is under power and moving forward, both axles are locked in position and turn at the same speed. This means each driven wheel is getting approximately the same amount of traction.

A Detroit Locker will disengage when you take a corner. During a turn, the outside wheel must travel a distance greater than the inside wheel. This causes the wheels to turn at different speeds. The teeth on the Detroit Locker’s spider and driven-clutch assemblies are cut at a negative angle. Here the center cam (inside the spider gear) locks into position and acts as a ramp to disengage the driven-clutch teeth from the spider gear. This allows the outside wheel to rotate faster around the corner. Once the driven-clutch rotation equalizes and both wheels are traveling at the same speed, the exterior springs force the teeth to mesh, or lock. That’s why a Detroit Locker sounds and feels like it’s locking and unlocking when you’re turning.

In the old days, the Detroit Locker got a reputation from clunking and banging as it engaged and disengaged. Nobody cared because that meant you drove a really serious car. Today’s Detroit Locker will certainly let you know when it locks and unlocks, but it’s not quite as severe as the old style differentials.

In 2005, powertrain giant Eaton Corp. purchased Detroit Locker’s parent company and greatly expanded the offerings. Today, you can get a Detroit Locker for Ford 9- and 8.8-inch, Dana 60, Dana 44, Chrysler 8 3/4-inch, and GM 10-bolt and 12-bolt axles at Summit Racing.

Can I use the stock bearings?

In most cases the Detroit Lockers work with the factory (stock) bearings. The exceptions are: 10-bolt 8.5\8.6 GM axles, “Performance” Dana 35 and 44 axles, and GM 12-bolt with 35-spline axles. No other special setup is required.

When I step on and off the gas pedal, I hear the unit make a “clunking” noise. Why?

Because Detroit Lockers have backlash or “slack” between the drive and driven teeth, you will hear noise in everyday use when you take corners and go from drive mode to coast mode. With the vehicle on the ground and the transmission in neutral, you will have one-quarter to one-third of a turn of lash in the driveshaft. This is completely normal.

How much horsepower and torque will the Detroit Locker take?

There are many factors to consider when determining if a specific differential is right for your vehicle. Horsepower and torque are important factors. However, the weight of the car, tire height/width, the terrain and suspension are all important. For example, a setup that uses street tires will live longer because both tires will break loose and spin before any real strain is put on the unit. But as the tire gets wider, the stress on the unit increases because the traction is greater. But keep in mind that the Detroit Locker is the strongest unit sold today and has been for many years.

Can the Detroit Locker be used in front axles?

Yes it can, but you must have lock-out hubs and they MUST be unlocked for on-road driving so you can steer the vehicle.

18 responses to “Detroit Locker: History, Anatomy & FAQs About the Toughest Differential in Town”