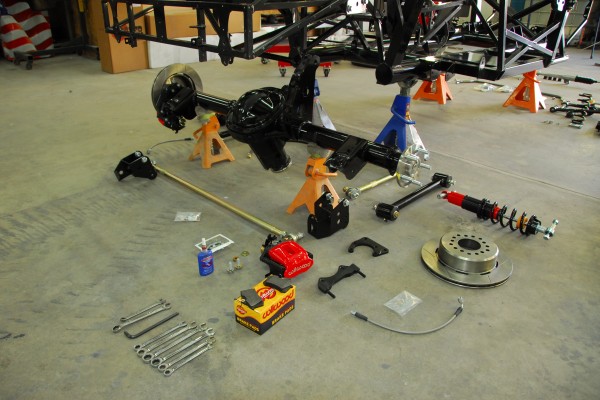 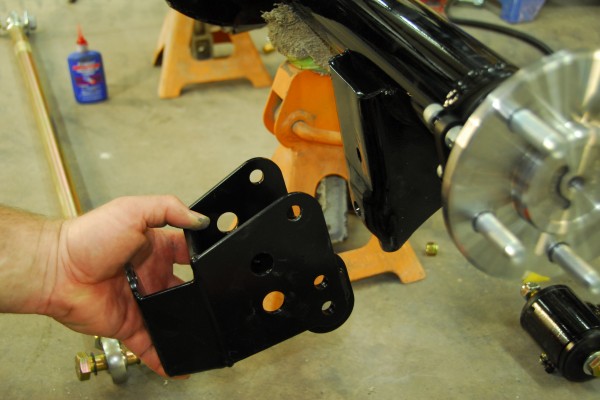 The three-link components of FFR’s Mk4 complete kit, designed specifically for the chassis, are all new so you don’t have to pull parts off a used Mustang. The Wilwood brakes shown here are an optional upgrade. The sliding rear calipers are for a C-clip axle (a fixed caliper is for a non C-clip axle).

This bracket being fitted to the back of axle serves as a mount for both the Panhard rod and coil-over shots. Made of plate steel, it has multiple mounting locations to adjust the anti-squat setting, for a quicker hookup under hard acceleration.

FFR’s tubular trailing arms are custom-made in-house. They have the same length and geometry as the stamped-steel units found on a Mustang, but are lighter and stronger, and use polyurethane instead of rubber bushings. The Grade 5 bolts included as well.

The Wilwood rotors are slotted and vented (drilled rotors are option). They fit on a five-lug axle flange (instead of the standard four-lug unit), which also accepts a Halibrand-style wheel.

This adjustable upper link with rod ends sets the pinion angle for anti-squat. (By comparison, the four-link option has two upper arms, but no transverse Panhard rod to stabilize the rear-end.)

Before attaching the Panhard rod, the tube mount at the aft end of main rail, which serves as its forward brace, has to be drilled out. Installing the top mount of the coil-overs prior to installing the Panhard mount ensures that the axle is in the correct location, above this support tube.

Install spacers at the rod end for the third link at the forward bracket.

After attaching the Panhard rod, use a floorjack so it’s easier to lift the rear axle into place.

Center the axle by adjusting the length of the Panhard rod, and measuring from inside of tire to main frame rail. In addition to checking your measurements, make sure the body lines up with and wheels. Also, set the ride height before leveling out the rod.

After bolting on the lower end of coilover, adjust ride height by measuring from bottom of frame to ground. The recommended height is 4 3/4 inches in the rear, and 4 1/2 inches in front.

Once the suspension is secured, install the fuel tank, a new Mustang aftermarket unit.

In our first installment on Summit Racing’s Cobra Project, we covered in general the scope of the buildup, and then got down to the details on installing the front suspension and steering rack. With the front end basically done (except for brake lines and alignment, which we’ll cover later), we next proceeded with assembling the rear-end.

First, though, we should point out that Factory Five Racing (FFR) offers three different setups: four-link, independent, and three-link. About a third of all Factory Five Racing (FFR) roadsters use the standard four-link, which is well suited for solid street performance. It’s the most affordable choice, since it’s fitted with a Mustang 8.8-inch live axle and related suspension parts sourced from a used donor vehicle. (FFR also offers new 8.8-inch Ford rear-ends with Mustang brake kits.)

On the other hand, the independent rear suspension (IRS) option is a more exclusive choice, as it features a welded-in cage and custom assembled axles and CV joints. An IRS setup generally performs better on uneven pavement and tight turns, but doesn’t hook up as well as a live-axle on straight-line acceleration. The IRS on the Mk4 kit employs an 8.8-inch center section from a 1989-1997 Ford Thunderbird, plus rear spindles and brakes.

FFR’s three-link rearend is the most popular for a couple reasons and is the one used on this Summit Racing buildup project. The Mk4 complete kit consists of all-new parts, saving time over chasing down parts from a Mustang donor vehicle, since  the frame brackets, Panhard rod, tubular control arms, and coil-over shocks are included. Used on FFR Challenge Series cars, its performance is better as well since the tubular control arms are stronger and lighter. Also, the transverse Panhard rod stabilizes the rear-end, eliminating binding on the upper control arms under hard cornering or acceleratio  and providing smooth, predictable handling on both the track and street.

For our upcoming installments, we’ll be focusing on assembly of Ford’s 427 Stroker engine, along with body prep and finishing off the interior. For now, you can check out how the rear suspension came together in the slide show above.