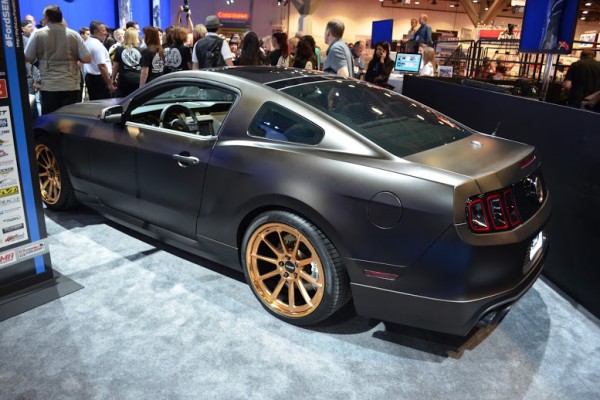 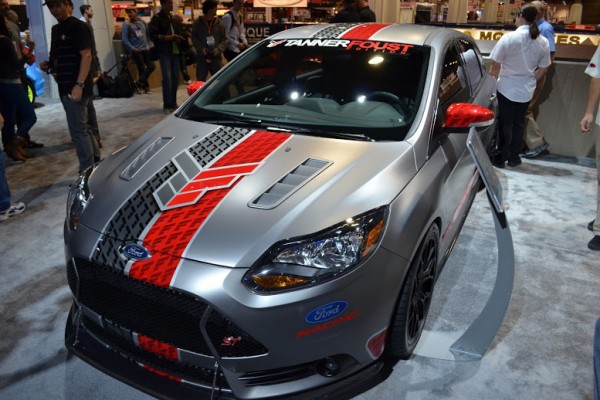 ZZ Top's Billy Gibbons and the builders help introduce the 1933 Ford roadster at the SEMA Show,

Coyote 5.0 powering the 1933 Ford Roadster at the SEMA Show.

1933 Ford roadster at the SEMA Show

2013 Ford Mustang built entirely by this team of women from the SEMA Businesswomen's Network.

Famed automotive artist Sam Bass created this limited-edition artwork at the request of Edsel B. Ford II. Just 500 were made, each autographed by Edsel, and proceeds will benefit JDRF.

Intro video at the Ford press conference at SEMA.

Ford Motor Company held its annual SEMA press conference on Tuesday — and they brought a few friends with them.

The biggest news to come out of the Ford press conference was the Cobra Jet engine concept built with EcoBoost technology. Ford engineers will look to develop the concept, which aims to deliver increased efficiency over the 2.9-liter blower used on the 2013 Cobra Jet engine. The turbo design used on the Cobra Jet concept incorporates the smallest possible turbos, with very low inertia and low internal friction to increase responsiveness and reduce lag.

In addition to the Cobra Jet concept, Ford brought a variety of other concept vehicles — everything from a stable of Focuses (Foci?) to an F-250 SuperCab to a custom Escape. Check out our slide show for what caught our eye.