As a child of the 1960s and early ’70s, Dean Michaels was raised around Detroit steel. For him, cars were as much a part of life as breathing.

“Back then, everyone was into cars,” Dean said. “Every year, my dad would take me to the dealerships and we’d look at the latest cars. They were always coming out with new, fast cars.”

Dean started working at age 14 to save up enough money to buy a car as soon as he turned 16. That first car was a doozy, too—a 1965 Dodge Coronet with a 426 Max Wedge.

“I learned how to drive in the Coronet; my mom taught me how to power-shift it,” Dean said.

“There were six parking spots in front of the high school, and the only way to get one was to earn it at the dragstrip,” Dean said. “The six fastest cars in school were always parked right up front. I spent a lot of time at Milan Dragway (earning a spot).”

Fast-forward a few decades. Dean Michaels is the same car guy he always was, and is the proud owner of a 2004 Mustang Cobra. Strangely enough, it was a hopped-up 2003 Mercury Marauder that got Dean into Mustangs.

“The Marauder was a blast because no one would see it coming, but I couldn’t get it to go as fast as a (Mustang) Cobra,” Dean said. “So that’s why I bought this car.”

The first thing that stands out on Dean’s Cobra is the paint. Virtually everything that could be painted was color-matched to the car’s Red Fire Metallic finish. Dean found a company in Texas that could custom mix the paint, then he created what is probably the world’s first bathroom-based paint booth.

“I didn’t have a garage to work in, and winter in Ohio is too cold to consider painting anywhere that’s not heated,” Dean said. “So I converted a spare bathroom into a paint booth. I put plastic up, brought in lights, and used the exhaust fan.”

That’s a sign of a dedicated enthusiast if we’ve ever seen one.

As far as performance mods go, Dean had planned to add just a smaller blower pulley and a cold air intake; both upgrades were made virtually the same day he bought the Cobra. Then he met a group of Mustang enthusiasts at a get-together—and all heck broke loose.

“It hadn’t even occurred to me to modify the Cobra that much, but these guys really know how to get the most power out of Mustangs,” Dean said. “That’s one of the great things about the Mustang culture and especially this group—they’re tight-knit, they’ll do anything for each other, and they’re not afraid to share performance tips and tricks.”

The Cobra’s Eaton M112 supercharger was sent to Stiegemeier Porting, where it was ported and polished to perfection. The factory exhaust was replaced with a hand-fitted, 2 1/2-inch cat-back exhaust and a pair of DynoMax Ultra Flo mufflers that give the Cobra a distinct, deep sound. Other performance goodies include a custom cold air intake, Accufab polished throttle body, and an SCT chip. The 4-Valver was then custom-tuned by the guys at Akron Horsepower.

Suspension bits include an Eibach spring kit that lowers the Cobra 1 1/2 inches. A Kenny Brown Extreme Matrix subframe system and MotoBlue Hard Launch kit were added so Dean can enjoy every bit of the 516 horsepower and 531 foot-pounds of torque the Cobra can deliver.

Dean has seen quite a few changes in the automotive industry over the years, but he’s not stuck in the past.

“You never forget your first car. I can still remember the feel and smell of the Coronet, but I really like modern technology. And now the Big Three are producing the cars that people want again,” Dean said. “When I get behind the wheel of the Cobra, I’m 25 again. This is a great time to be a car guy.”

Interior
Upholstery: Stock
Dash: Stock with Raptor parallel shift lights
Shifter: Hurst Billet/Plus
Special Thanks To: Akron Horsepower for the awesome tune, Ohio Street Stangs for all of the help detailing and getting the car ready to show. 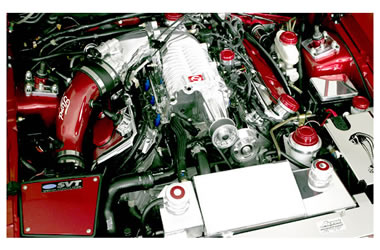 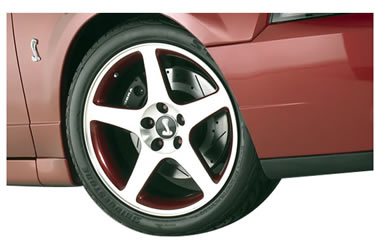 The joke around Dean’s car club, Ohio Street Stangs, is that you need sunglasses to get near his car. Looking at the supercharged 4-Valve engine, you would certainly have to agree—anything that hasn’t been painted has been polished to a mirror-shine. But underneath the glitz is plenty of brawn—516 horsepower and 531 foot-pounds of torque, to be exact. The already-stout Cobra motor was treated to a port and polish job on the Eaton blower (spun faster thanks to a smaller 2.8 inch pulley), a custom cold air intake and larger throttle body, and an SCT tuneup by Akron Horsepower. The engine runs all that power to the rear tires via the factory six-speed that’s been updated with a Centerforce DFX clutch.

Most people would be pretty happy with a set of 18 inch Cobra wheels on their Mustangs. Not Dean. He had to make his Cobra wheels different from everyone else’s, so he painted the inner rims to match his Mustang’s Red Fire Metallic paint. It’s a touch that really enhances the car’s look.

Ford did a decent job with the Cobra’s interior, but Dean couldn’t resist the urge to modify it to his liking. He painted the bezel around the center binnacle, added Raptor parallel shift lights, and swapped the stock shifter for a Hurst Billet shifter. Dean now has no excuse for missing a gear.

From the rear, you can’t mistake Dean’s Cobra for an ordinary Mustang droptop—not with the name spelled out in stainless steel on the bumper cover and two big honkin’ tailpipes sticking out from the rear valance. Those pipes are connected to a custom 2 1/2 inch dual exhaust with a BBK X-pipe and DynoMax Ultra Flo mufflers.

A 1 1/2 inch drop (courtesy of Eibach Pro Kit springs) helps improve the Cobra’s stance, not to mention its handling. Other suspension improvements include a Kenny Brown Extreme Matrix System, MotoBlue Hard Launch Kit, Bilstein shocks, and BBK caster/camber plates. The brakes have been updated with slotted and cross-drilled rotors and a set of Hawk ceramic pads.