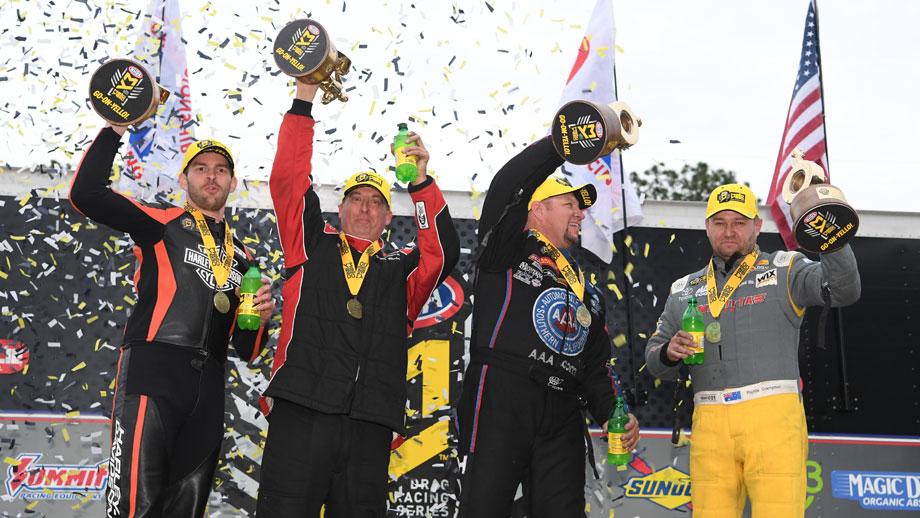 Top Fuel’s Crampton won in Gainesville for the second-straight year when he drove his dragster to a final round win against Clay Millican. Following wins against Antron Brown, Leah Pritchett, and the very competitive entry of T.J. Zizzo, Crampton won the final on a holeshot with his 3.769-second pass, barely edging Millican’s 3.756. Crampton was able to claim his ninth-career win by a final margin of just .0032-seconds.

Hight padded his early-season points lead by winning his second race in three starts. A Gainesville winner in 2012, 2014, and 2016, Hight nailed down his fourth title in Florida and the 47th of his career after Tim Wilkerson smoked the tires in the final. The low qualifier with a 3.86, Hight never ran slower than 3.870 in his Sunday wins over Terry Haddock, Ron Capps, and teammate John Force.

Like Hight, Butner has also started the season with a pair of wins after wheeling his Chevy Camaro to the Pro Stock title in Gainesville. Butner picked up the win, the 24th of his career, after opponent Alex Laughlin encountered a mechanical issue and could not make the run. Butner topped Fernando Cuadra, Deric Kramer, and low qualifier Rodger Brogdon. While he didn’t qualify for the tough SAM Tech.edu Factory Stock field, Butner did share the winner’s circle with his fiancee, Randi Lynn Shipp.

The latest all-Harley-Davidson Pro Stock Motorcycle final went to Andrew Hines, who broke a year-long winless drought with a final round win against Eddie Krawiec, who was gunning for his fourth-straight Gatornationals title. Hines beat Cory Reed, Jerry Savoie, and Hector Arana Jr. on race day, and also left Gainesville with a new elapsed time record of 6.702-seconds.

Top Fuel winner Richie Crampton: “It’s funny how you can develop a connection to a certain racetrack, and I’m pretty excited that I’ve developed that connection with the Gatornationals because this is a huge race no matter what year you win it.

“With Kurt Elliott and Connie Kalitta turning the screws it’s been a good day of racing and I’m really proud of my guys. There weren’t any easy rounds today; it just goes to show you how tough Top Fuel is this year. Every round win is getting harder and harder to get. Since we won here last year, you hear those clichés like ‘You’re going to have those in your career’ but I knew I just continued to do my job and had faith in my team the wins would come back. I’m just focusing on being a dependable driver.”

Funny Car winner Robert Hight: “Qualifying No. 1 at the first three races shows we have a really good race car, but I’ve never seen a Funny Car be this consistent and this quick; counting our last qualifying run and our first two rounds today, our ET’s were within two-thousandths of a second. [Crew chiefs] Jimmy Prock and Chris Cunningham are really happy with the clutch pack we have and talking about how it’s running like it ran in 2017 [when he last won the championship]. It just responds and repeats, and we have enough of this clutch’s parts to go all year long. We’ll just refine it and make it better and better.

“I almost blew it in the final. I had been watching Tim Wilkerson and he had great lights all through qualifying so I knew going up there I’d have to be on my game. I got a little antsy and it was a long tree, and I started to go [down on the accelerator], caught it and then went all the way down. It’s a good thing I wasn’t deep-staged. I’ll be honest with you, I think I got away with one there.”

Pro Stock winner Bo Butner: “Today was absolutely crazy; I had no shot at this after round one. I struggled just to get down the track but my KB team didn’t give up. They went to work and made it happen. By the final, I felt like we had our car fixed. I was ready for Alex and then they told me he was broke. I didn’t like winning like that but I’m sure we’ll have many more battles this year.

“Winning this race along with Randi Lyn is special. The fact that it’s the 50th [Gatornationals] makes it even more special. I’ve never seen a race like this where the crowd was so big. NHRA did right by this race.”

Pro Stock Motorcycle winner Andrew Hines: “My Screamin’ Eagle Harley-Davidson Street Rod was brutal today. It responded to all the changes we made and I was able to go up there and not worry about all the things that could happen. It just feels good to get a win after not getting one all last season. Eddie has been a pain in the you-know-what, especially here in Gainesville. This is only my second win here and it’s mostly because of him. He’s got six of them. With this new bike, I think we’ve finally closed the gap on him.