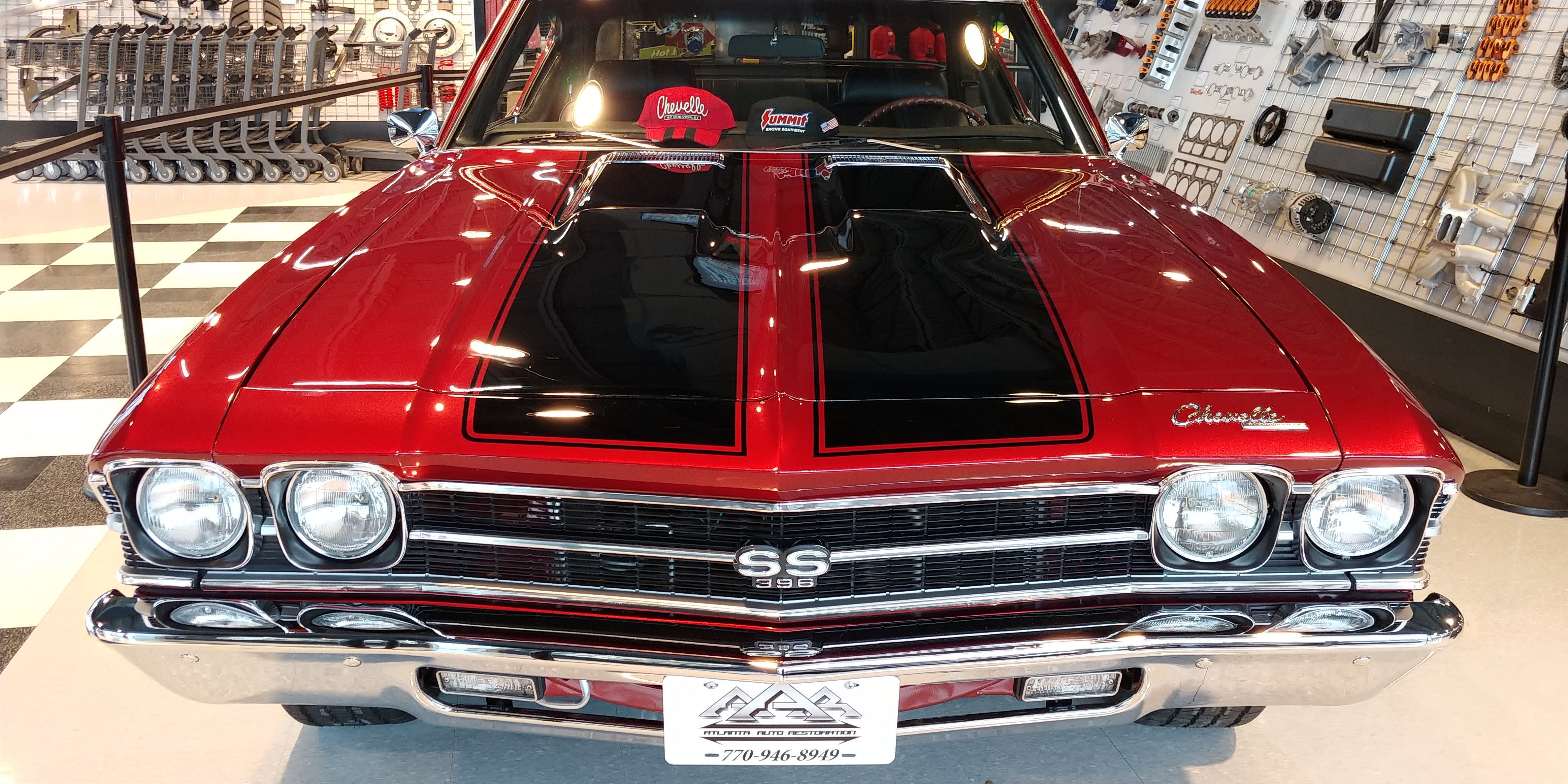 Is it a Chevelle? A Malibu? Both? Neither? In the case of David Hamilton’s 1969 “Call-it-what-you-will” SS, the real answer lies somewhere in between.

Unveiled today at Summit Racing Equipment’s Super Store in McDonough, GA—where it will spend the next week being ogled by customers—this restomod is a reinvention in every sense of the word. Born a 1969 Chevrolet Malibu, the vehicle has been restored to match the styling cues of a 1971 Chevrolet Chevelle, while also integrating modern technology like disc brakes, power steering, and a performance exhaust system.

Even Atlanta Auto Restoration—the company responsible for completing the project—owes its existence to owner Mark Engel’s willingness to reinvent himself, leaving his job in the aviation industry in 2006 to open his own restoration shop. The move paid off, and now Engel operates one of the busiest automotive restoration businesses in the state of Georgia.

“I always wanted to open my own shop, and I just felt like this was it,” he said. “If I was gonna do it, I needed to do it now.” 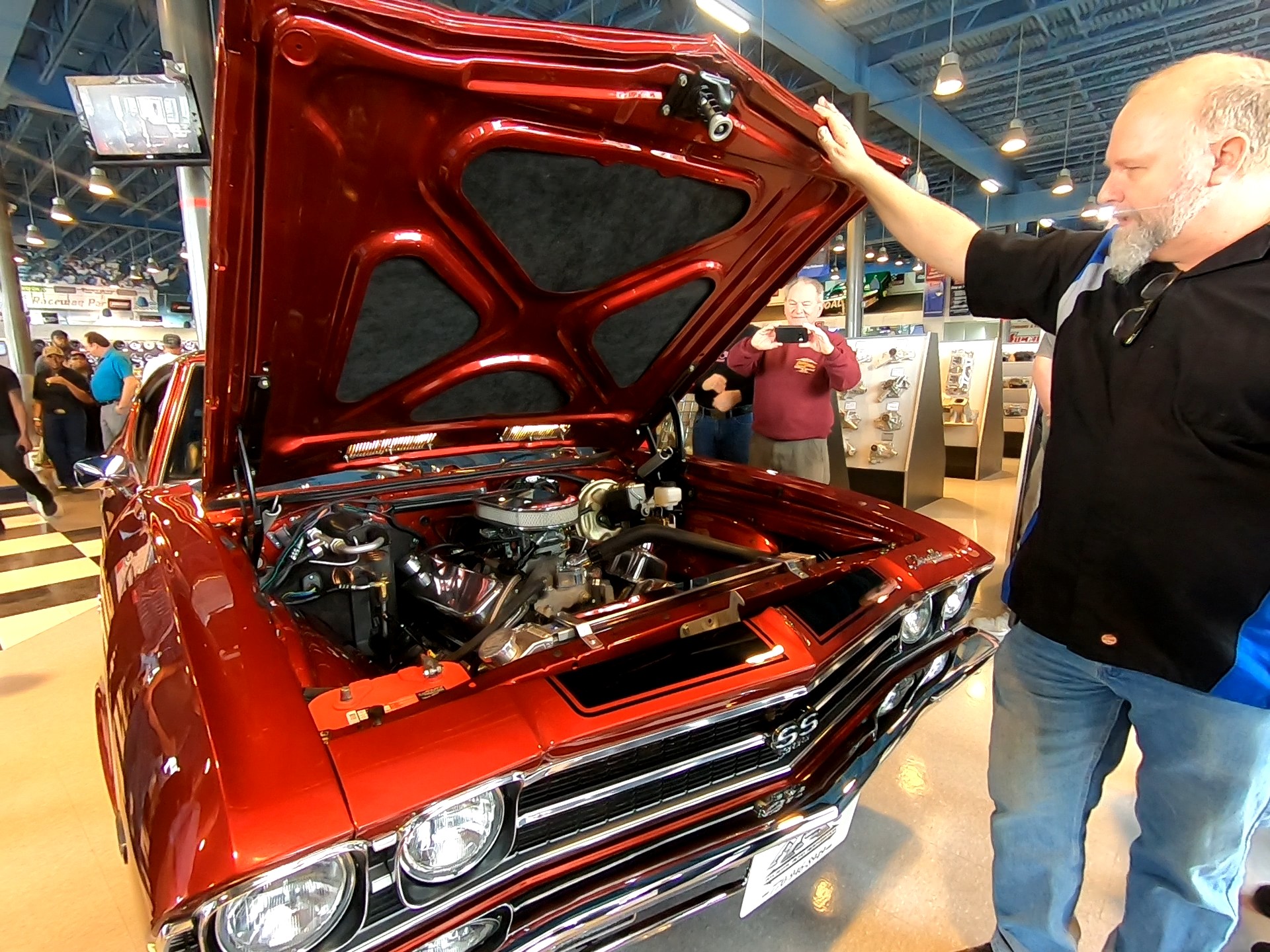 Much like Engel, Hamilton had his own “now-or-never” moment with the Malibu that his son discovered at a dealership in Decatur, GA, in 2005. They bought the car intending to restore it together—getting so far as dismantling, sandblasting, and priming it—but could never find the time to complete the project. After years of watching the vehicle languish in his garage, he finally decided to hire a professional.

“It just became obvious that if I was gonna drive it in this lifetime I needed help,” Hamilton said.

Hamilton reached out to Atlanta Auto Restoration after a neighbor who owns several custom hot rods recommended the company to him. Engel stopped by his house to inspect the vehicle. 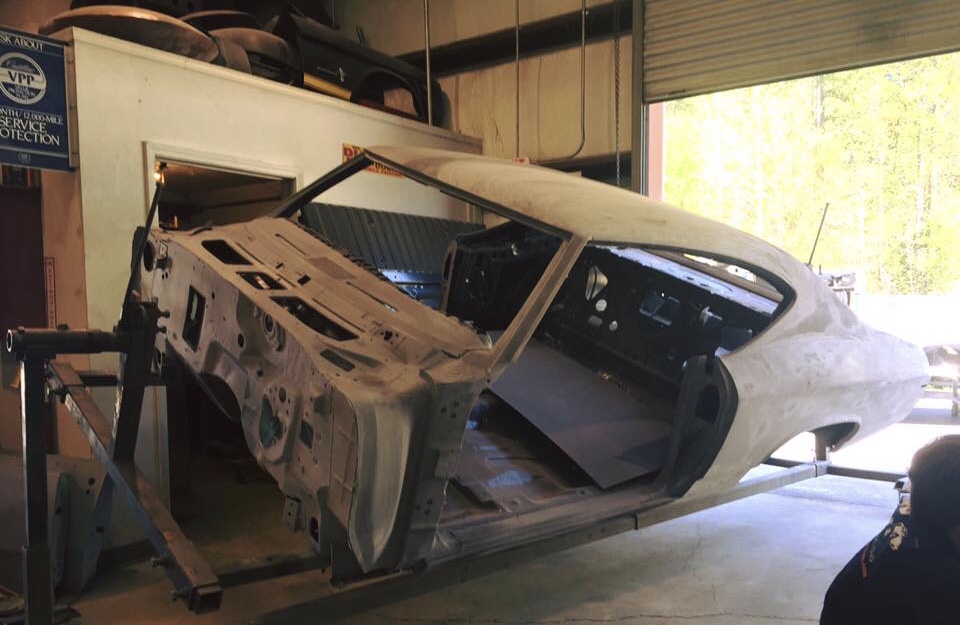 “He had pretty much gutted the car down by himself,” Engel said. “He took everything out of the interior and had it as basically a body sitting on a frame. I went over, looked at it, and gave him some pricing on the body, paint, assembly—stuff like that.

“After that, I didn’t hear anything for about two years,” he continued. “I wondered the whole time whatever happened to that car. All of a sudden he calls me up, says he had to get some affairs in order, and he’s ready to do it. We went in, got the car, and started the process.”

Hamilton can’t claim credit for originating the idea to turn his Malibu into a Chevelle. Rather, that plan was born from a previous owner’s decision to turn it into what he described as a poorly executed “halfway SS clone.” While it may have negated the original identity of the vehicle, it’s a choice that Hamilton has embraced.

“It gave me the freedom to do what I want,” he said. 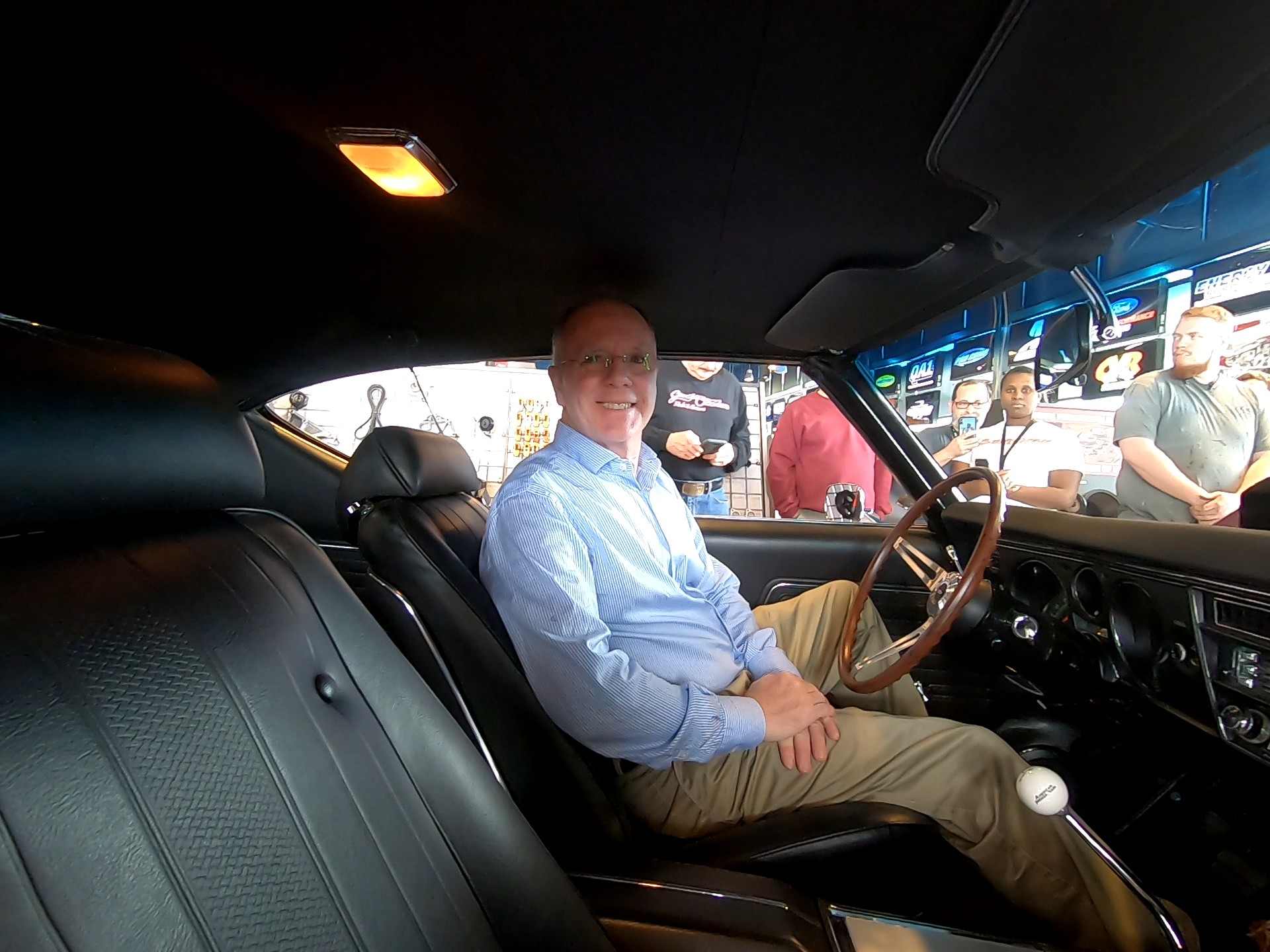 Owner David Hamilton gets behind the wheel of his restored Chevelle SS for the first time. (Image/Summit Racing)

Engel said the project was a “total frame off” requiring all new components, body panels, and a “lot of rust repair.” His team gave the vehicle a new roof, quarter panels, a floor, and a trunk panel, using Goodmark and Auto Metal Direct parts purchased from Summit Racing.

Hamilton himself provided and started the rebuild of the engine used in the vehicle—a Chevy 402 big block. 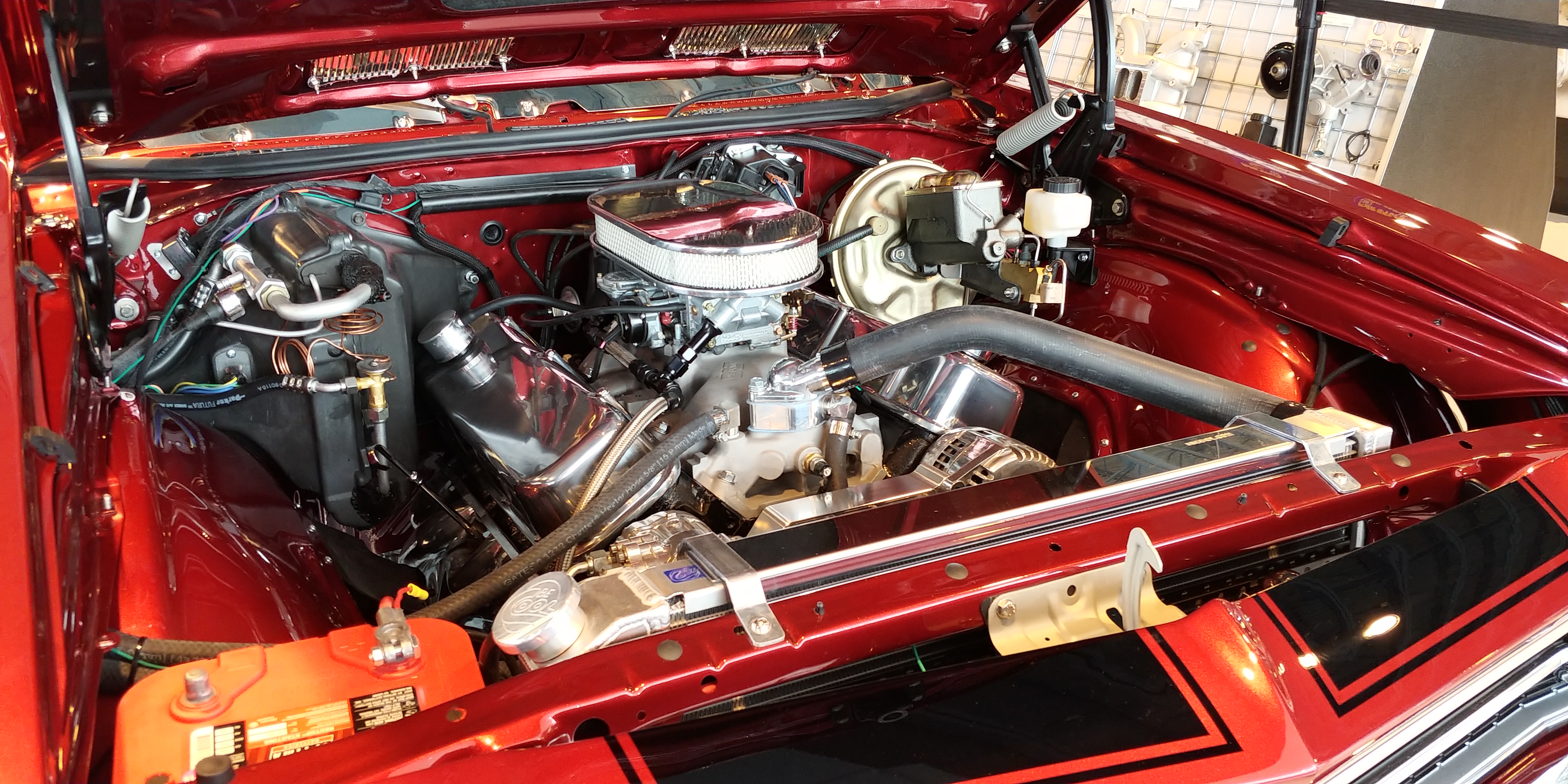 After years hiding behind the closed doors of his garage and the Atlanta Auto Restoration shop, Hamilton said he doesn’t intend to let his new prize spend the rest of its life sitting idle.

By the looks of things, we’d call this rescue a success.