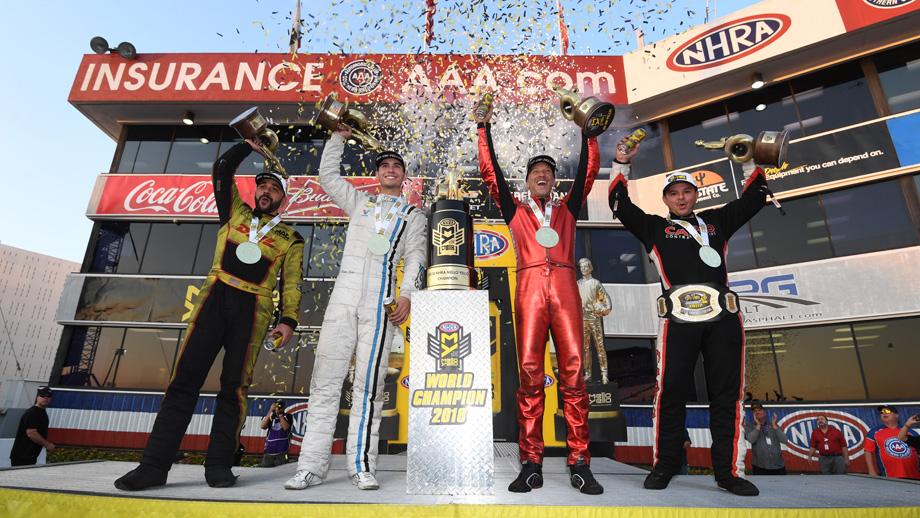 The list of race winners at Auto Club Raceway at Pomona will look familiar.

They were Steve Torrence (Top Fuel), Todd (Funny Car), Tanner Gray (Pro Stock) and M. Smith (Pro Stock Motorcycle). For the first time in NHRA history, all of the event winners were also the world champions in their respective categories.

Robert Hight, the defending category champion, was second in points in the category and smoked the tires against Bob Tasca III during the opening round of eliminations which guaranteed the title crown to Todd.

“People kept asking, ‘what do you need to do to clinch?’,” Todd said. “I’m like, we need to win the race. We need to not worry about what we need to clinch it. Seeing [Hight] smoke the tires first round was instant relief. My crew was racing smart and the Yella Fellas do an awesome job preparing the thing today. They stayed focused all day long because there were a lot of distractions around our pit area and they did their job. The other teams at Kalitta Motorsports came over to help and I can’t thank them enough. It’s a huge family over there and we’ve all got each other’s backs and it’s awesome to have that kind of support.”

Todd went on to dominate the season ending event with a run of 3.872 at 329.10 taking down the defending two-time event champion Tommy Johnson Jr.’s Dodge Charger R/T. He finishes the season with six race wins, the first coming at the NHRA Four-Wide Nationals in Las Vegas, NV. Todd also won the prestigious Chevrolet Performance U.S. Nationals for the second year in a row and three events in the NHRA Mello Yello Drag Racing Series Countdown to the Championship, two runner-up finishes, and a solo # 1 qualifier.

Matt Smith secured his third NHRA Mello Yello Drag Racing Series Pro Stock Motorcycle world championship in the final round of eliminations. He powered his EBR to a 6.765 at 201.22 national speed record pass to defeat defending world champion Eddie Krawiec, who was the nearest championship contender. Smith defeated Angie Smith, Hector Arana, and LE Tonglet en route to the finals to secure the championship and event title. This is his first world championship title since 2013.

“Man, we went through a lot today,” Matt Smith said. “With the airline breaking in the first round and in the second round the transmission broke on us going through the lights. My guys did their job and we fixed all of the stuff that broke and ended up putting up three 200 mph runs today. We are having the time of our life right now though.”

Matt Smith’s championship season had four race victories with three wins during the NHRA Mello Yello Drag Racing Series Countdown to the Championship. He secured five #1 qualifiers and had a single runner-up finish.

In Top Fuel, Torrence made NHRA history by sweeping all six playoff races during the NHRA Mello Yello Drag Racing Series Countdown to the Championship. He raced his dragster to a holeshot win of 3.702 at 330.07 against NHRA’s winningest Top Fuel driver Tony Schumacher’s run of 3.700 at 331.61 in the final round. This Torrence’s 11th win of the season, 27th of his career and first at Auto Club Raceway at Pomona.

“It has truly been unbelievable,” Torrence said. “To go out and do what those Capco Boys have accomplished is solely by the grace of the good Lord. We’ve won some rounds that we probably should not have won. We are truly blessed to be able to do what we’re doing. We’re going to be in the history books. Nobody can beat us; they can only tie us. That’s a pretty cool stat to put behind your name.”

Gray drove past his father Shane Gray, Erica Enders, and Jason Line before entering his second consecutive final round appearance at the event. Skillman defeated Alan Prusiensky, veteran Greg Anderson, and #1 qualifier Jeg Coughlin Jr. before falling in the finals.