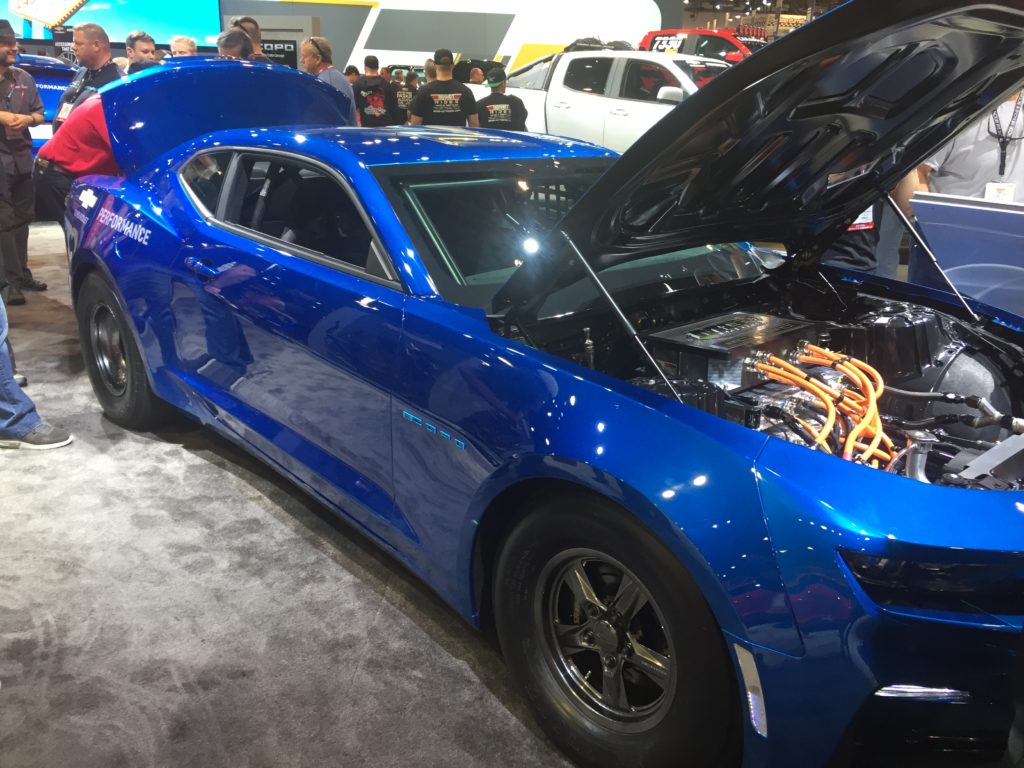 Chevrolet opted out of its normal Tuesday morning SEMA press conference and instead provided all the electricity the SEMA Show needed by unveiling its eCOPO Camaro Concept, an electrified version of its classic COPO Camaro, on Monday evening before the show.

According to a Chevrolet press release, the eCOPO concept was developed by General Motors and built in partnership with the pioneering electric drag racing team Hancock and Lane Racing. The concept race car—based on the 2019 COPO Camaro—is entirely electric powered, driven by an electric motor providing the equivalent of more than 700 horsepower and 600 ft.-lbs. of torque. 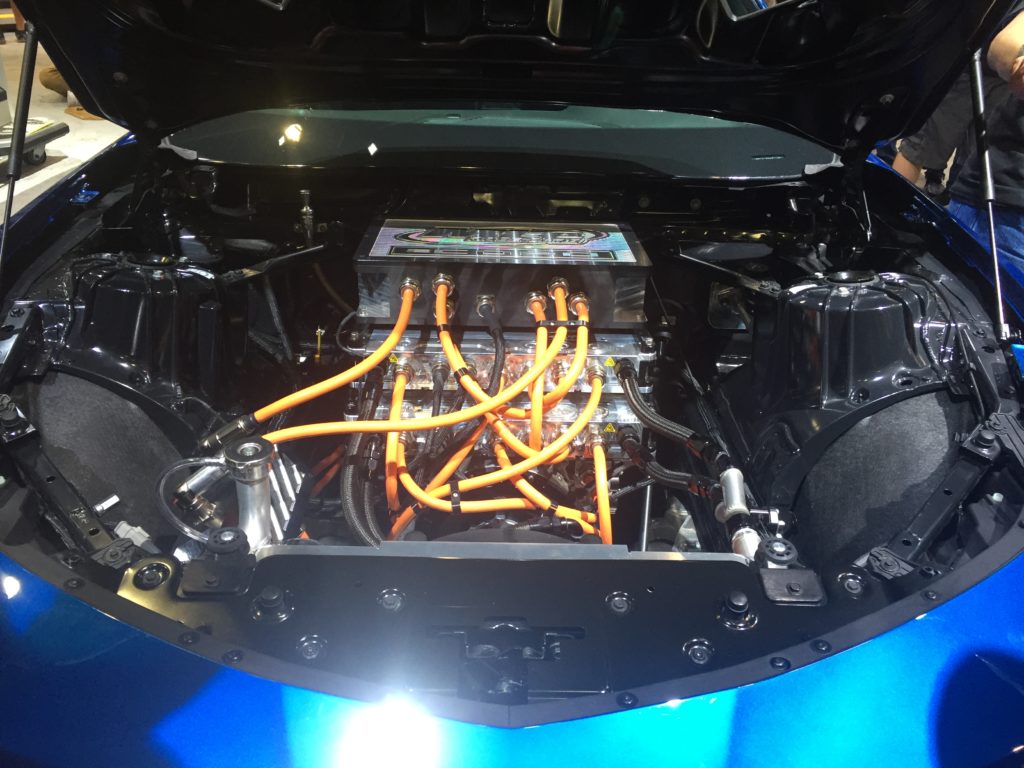 “The eCOPO Concept is all about where we go in the future with electrification in the high performance space,” said Russ O’Blenes, director, Performance Variants, Parts and Motorsports at General Motors. “The original COPO Camaro program was all about pushing the envelope, and this concept is an exploration with the very same spirit.”

Chevrolet partnered with Hancock and Lane Racing not only because of the team’s success in NHRA drag racing, but also its involvement with Patrick McCue, the driving force behind the record-holding “Shock and Awe” electric drag racing car, and his Seattle-area Bothell High School automotive technology program. With the racing team’s assistance, more than a dozen students participated in the development and assembly of the electrified drag car.

“This project exemplifies Chevrolet and General Motors’ commitment to engaging young minds in STEM education,” said O’Blenes. “It also represents our goal of a world with zero emissions, with the next generation of engineers and scientists who will help us get there.”

Just as the original 1969 COPO Camaro models relied on creative engineering to make them successful in Stock Eliminator drag racing, the eCOPO breaks new ground with its unique motor and GM’s first 800-volt battery back.

The electric motor is based on a pair of BorgWarner HVH 250-150 motor assemblies, each generating 300 lb-ft of torque, and replaces the gas engine. It is connected to a conventional racing-prepared “Turbo 400” automatic transmission that channels the motor’s torque to the same solid rear axle used in the production COPO Camaro race cars.

The all-new 800-volt battery pack enables a more efficient power transfer to the electric motor and supports faster recharging, which is important for the limited time between elimination rounds in drag racing. 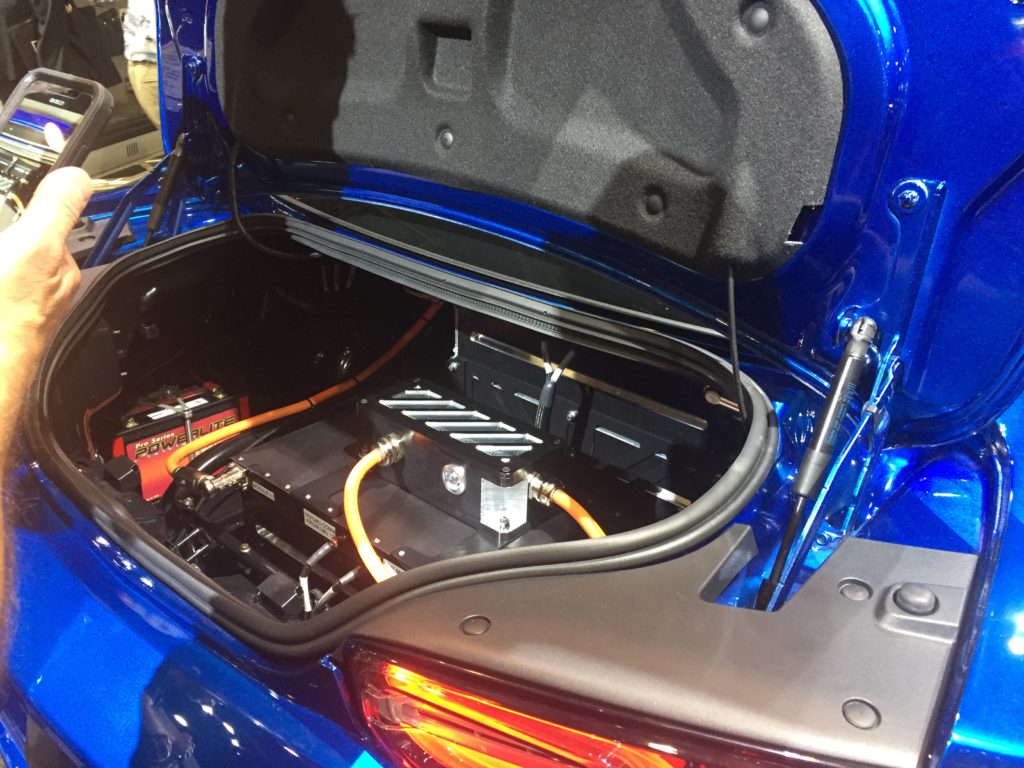 “Eight hundred volts is more than twice the voltage of the battery packs in the production Chevrolet Volt and Bolt EV, so the eCOPO pushes into new technological territory,” says O’Blenes. “As GM advances its electrification leadership, a big step might just come from the drag strip.”

The battery pack is composed of four 200-volt modules, each weighing approximately 175 pounds, mounted strategically in the car for optimal weight distribution. Two are located in the rear seat area and the other two are in the trunk: one in the spare tire well and the other in the area over the rear axle.

A full Battery Management System monitors all critical voltages and temperatures within the pack. It ties into a comprehensive safety system that continuously evaluates all vehicle electrical components for proper function and safe operation. The batteries in the rear compartment are sealed off from the interior and an integrated driveshaft tunnel has been added between the modules for increased protection. Additionally, the roll cage in the trunk area has been expanded to provide additional protection for the rear-mounted modules.

With the modules’ strategic positions, the eCOPO Camaro has greater than a 56 percent rear-weight bias, which helps launch the car more efficiently.