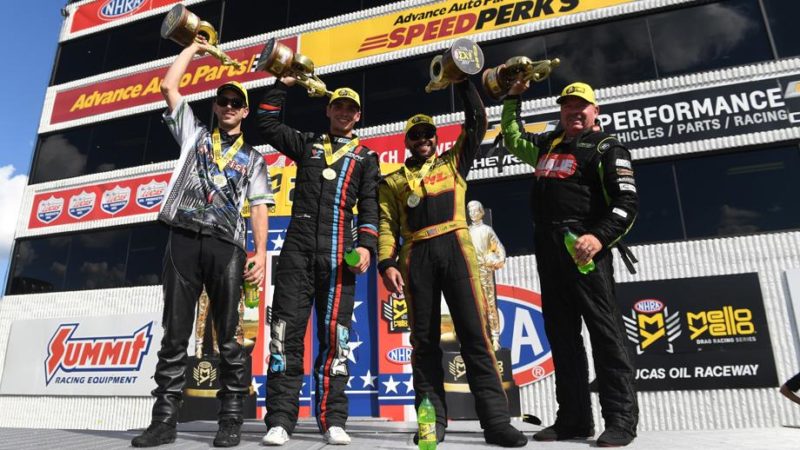 J.R. Todd, an Indianapolis native, powered his Toyota Camry Funny Car to victory for the second time in a row Monday at the 64th annual Chevrolet Performance U.S. Nationals, the world’s biggest drag race, at Lucas Oil Raceway at Indianapolis, and cementing the field for the six-race NHRA Countdown to the Championship.

Todd raced to a 4.062-second pass at 311.70 miles per hour to defeat Matt Hagan’s pass of 4.141 at 300.60 in his Dodge Challenger Hellcat SRT in the final round. Todd was the #1 qualifier for the event and was successful in securing his second consecutive victory at the prestigious Indianapolis race. He is the first Funny Car driver to win back-to-back U.S. Nationals since Mike Neff in 2011 and 2012.

“This is by far a dream come true,” Todd said. “You don’t know if you’re ever going to win Indy let alone go back-to-back. For whatever reason this year just felt different. It felt like we had a car that could come in here and win. Last year the confidence wasn’t there like it is this year.”

With the win, Todd moves to fifth in points heading into the NHRA Mello Yello Drag Racing Series Countdown to the Championship.

Hagan’s final round appearance was the second of his career at the U.S. Nationals. He defeated Jonnie Lindberg, points leader Courtney Force, and Shawn Langdon before entering his sixth final round of the season.

“You know, it’s so surreal because it’s one of the most prestigious races out there,” McMillen said. “To have your name that you won Indy is one of the highest accomplishments you can have. I’ve always known that this year was going to be a good year, but I couldn’t have scripted that it was going to be this good.”

McMillen picked up wins against Scott Palmer, points leader Steve Torrence, and Blake Alexander before taking home the Wally. He’s secured the #7 spot heading into the Countdown to the Championship. Kalitta took out Leah Pritchett, three-time world champion Antron Brown, and Billy Torrence en route to his third final round appearance at Indianapolis.

It was the fifth win of the season for Gray, and 10th of his career. He secured the #1 seed leading into the Countdown during the semifinals when veteran Greg Anderson lost in the quarterfinals.

“I guess the main thing is that I want to strive to be the best driver that I can be,” Gray said. “I continue to work and don’t really settle for what I am right now. I think every driver’s dream is to win Indy at least once, and it’s pretty cool for me to be able to do that.”

Tonglet rode to the Pro Stock Motorcycle win with his 6.864 pass at 197.10 on his Suzuki to defeat four-time world champion Eddie Krawiec and his Harley Davidson’s 6.884 pass at 197.02. This is Tonglet’s second career victory at Lucas Oil Raceway, his third win on the season and 19th of his career.

“I try not to think about anything,” Tonglet said. “We just go up there and try our best and whatever happens, happens. I don’t lose sleep over this since this is still a hobby for us. We just come out here to have fun.”

The 2018 NHRA Mello Yello Drag Racing Series season continues September 13-16 at Maple Grove Raceway in Mohnton, PA with the 34th annual Dodge NHRA Nationals and the kickoff to the Countdown to the Championship.