Prevent Damage to Delicate AN Fittings with the Proper Tools 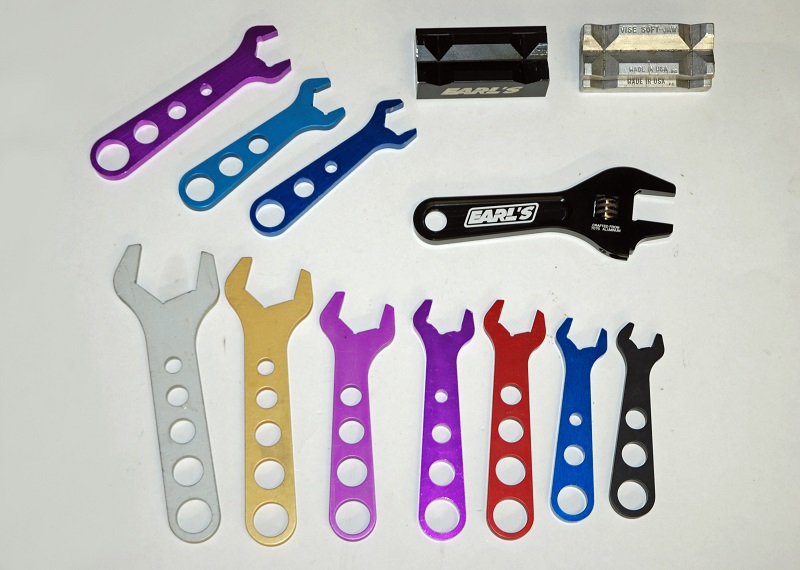 Wander through the pits at any drag race or examine enough cars at shows, and sooner or later you’ll find beat-up AN fittings.

Some will have a few nicks and bruises. Others may have even greater damage.

There’s good reason for that: those AN fittings are made of aluminum—a material that’s softer and more delicate than steel.

Those nicks and dings make them unsightly, however it’s not the only issue. AN fittings that are too beat up often require locking pliers to remove them after the corners on the hex wear off.

From there, problems tend to escalate. Before long, you’ll be making up new hoses and replacing fittings. But it doesn’t have to be that way.

What you need is the right collection of tools.

Believe it or not, some of the marring problems start during the hose assembly process.

There are tools designed specifically for protecting the fitting during assembly. One of the most important is a good set of quality hose assembly vise jaw inserts.

They are available from a wide range of manufacturers—both aluminum and nylon.

In either case, they are designed so that a powerful integral magnet on each side of the jaws holds it in place with the vise. If you examine the photos below, you’ll see the jaws are designed in such a way that you can orient the fitting in different directions, which is a bonus when working with different hose end formats.

The soft jaws prevent marring. Additionally, the vise jaws have angled pockets that allow them to be used with any AN fitting size from -3 to -32.

We’ve personally used the aluminum vise jaws from both Aeroquip and Earl’s Performance, so we can assure you they work.

Another thing to consider when assembling hose is the use of assembly lube. Many forgo it and use common motor oil.

You can get away with it sometimes, but keep in mind the difference between motor oil and assembly oil is that assembly oil is ‘heavier’ and specifically mil-spec formulated to ease the installation of hose ends onto synthetic rubber hoses. Assembly oil is also engineered to lubricate fitting threads during assembly. Because of the formulation, you needn’t use much. A pint tends to last several years.

Why not use a set of aluminum hose end wrenches? When assembling a hose end onto a hose, you’ll need considerable torque to adequately tighten the fitting and that torque requirement will often cause an aluminum wrench to slip, which tends to damage fittings.

So why do manufacturers build wrenches from aluminum?

The time to use aluminum hose end wrenches is while installing or removing the hose from a male component nipple.

You’ll note that the handles are short on aluminum AN wrenches. There’s a reason for that—it prevents over-torque and the dreaded jaw slip mentioned above.

Additionally, short handles allow for use in tight quarters.

The Earl’s adjustable wrench model is CNC-machined from true aerospace-grade 7075 billet aluminum and features a precision adjustment mechanism with a steel nickel knurled thumbwheel. The thumbwheel adjustment mechanism includes a spring and copper washer assembly to maintain correct torque and tension. The handle has chamfered edges that fit comfortably in your hand.

The tool easily fits AN -3 to -12 hose ends, and if you examine it closely you’ll see the nose is chamfered and the lower jaw is curved which provides for extra clearance in tight spots.

It only weighs 7.2 ounces, which means you carry it easily in your pocket. That, coupled with quick size adjustment makes it ideal for use in the pit area, staging lanes, or back home at the shop.

There are ways to protect those often fragile AN fittings.

We’re not saying you’ll never acquire a war wound or two, but these tools will go a long way toward solving the beat-to-death problem.

And the best part is that none of these tools are super-expensive. 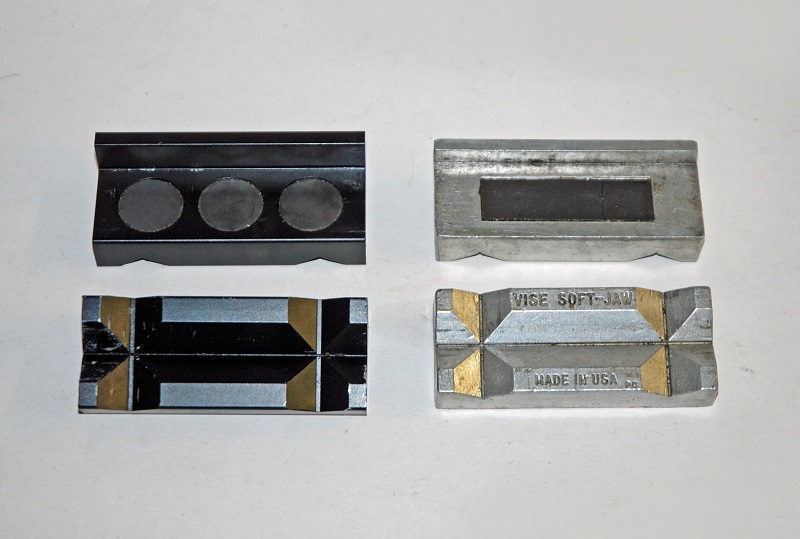 Here’s a look at a couple of the vise jaw inserts mentioned in the text. The black anodized version is from Earl’s Performance while the bare aluminum example is from Aeroquip. (Image/Wayne Scraba) 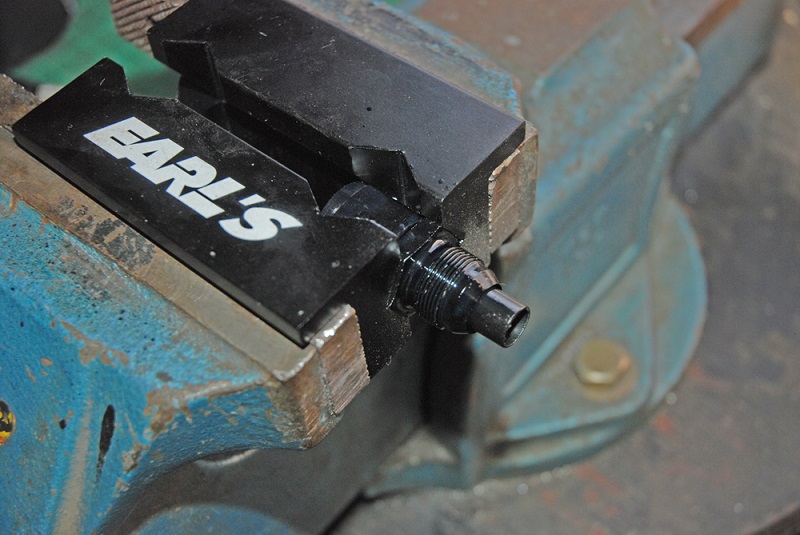 In this photo you can see that the barb side of the hose end is captured in the vise jaws prior to installing the hose. It looks backwards to some but this is the right way to assemble the hose onto the barb. (Image/Wayne Scraba) 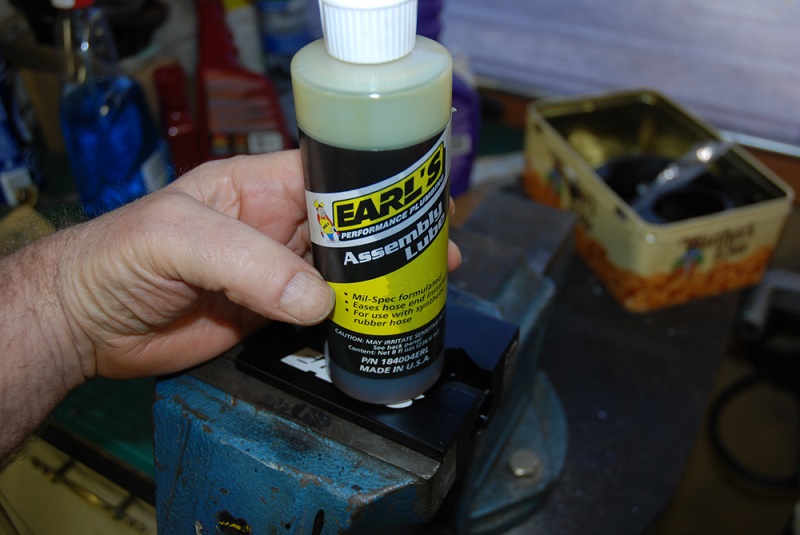 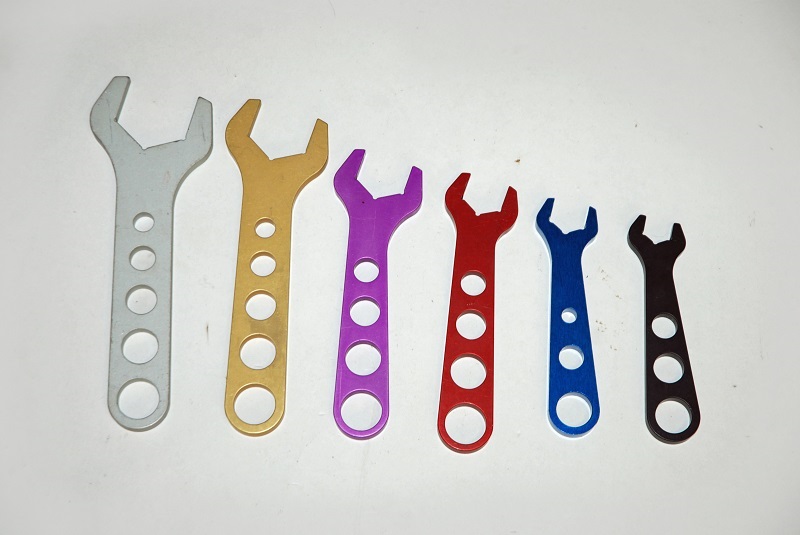 There are all sorts of aluminum hose end wrenches available today. Their purpose is to allow installation and disassembly of completed hoses onto male component nipples. (Image/Wayne Scraba) 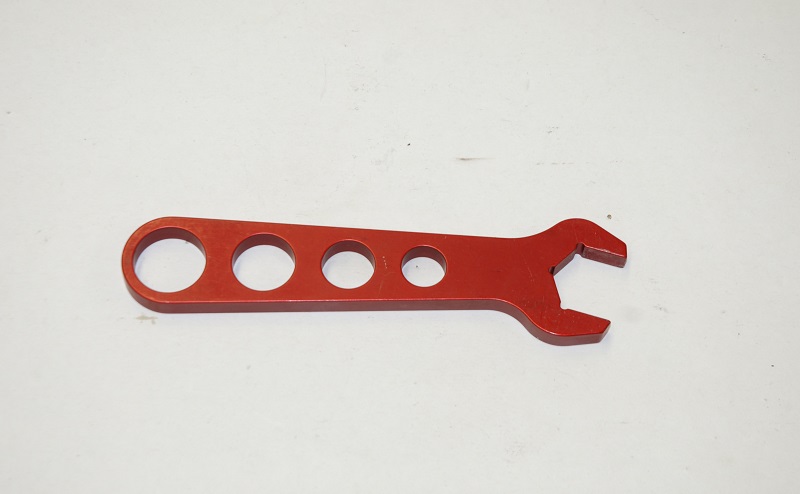 AN wrenches are designed to be short so that torque application is minimized (too much torque and you ‘kill’ the fitting). They’re also short so that you can use them in tight spots. (Image/Wayne Scraba) 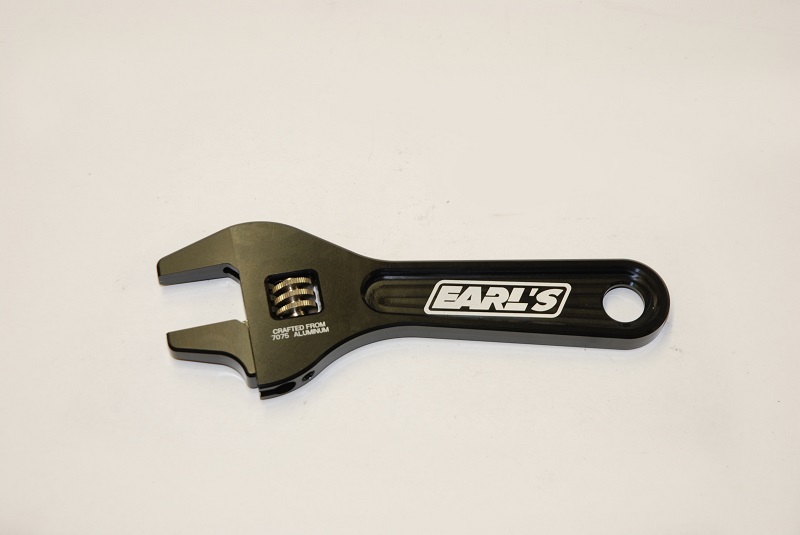 Earl’s and others offer adjustable AN wrenches. They’re compact and easy to carry around—perfect for pit action at a drag strip. (Image/Wayne Scraba) 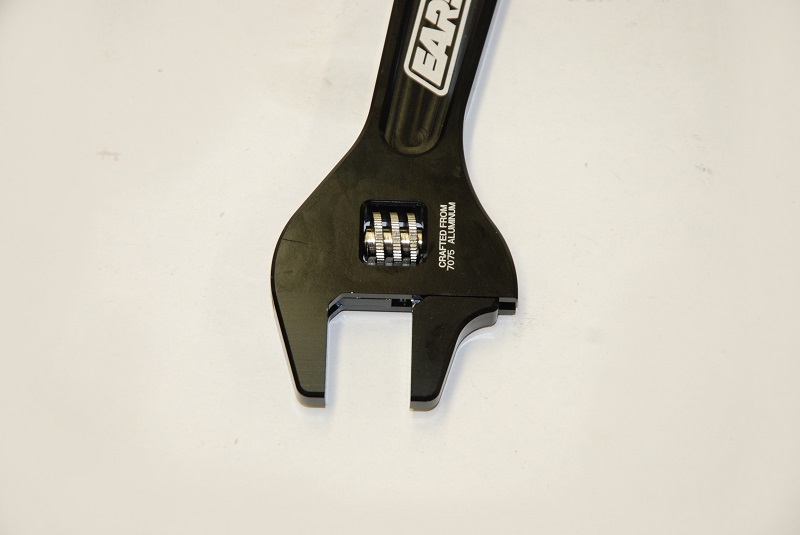 The Earl’s example is built with a curved lower jaw along with a chamfered nose that allows for clearance in tight spots. Additionally, the adjustable wrench has quality adjustment mechanism that allows it to maintain torque on the fitting. (Image/Wayne Scraba)