The clock starts ticking as teams of high school students rush to their identical Chevy small blocks. Their mission: take apart and reassemble the engines as fast and accurately as possible—no power tools allowed.

Like a Top Fuel crew preparing a dragster for its next run, competitors in the Hot Rodders of Tomorrow Engine Challenge don’t waste a single move working on their fully dressed V8s.

Members of the Forsyth Central High School (FCHS) Hot Rodders of Tomorrow Engine Challenge team will be demonstrating their skills at two venues. They and other Hot Rodders of Tomorrow teams will be in action at during Summit Racing’s Atlanta Motorama, April 22-23 at the Atlanta Motor Speedway. The FCHS team will also be at Summit Racing’s Retail Superstore in McDonough, GA for the 2017’s first Monday Night Cruise-In, April 24 from 6 pm to 8 pm. 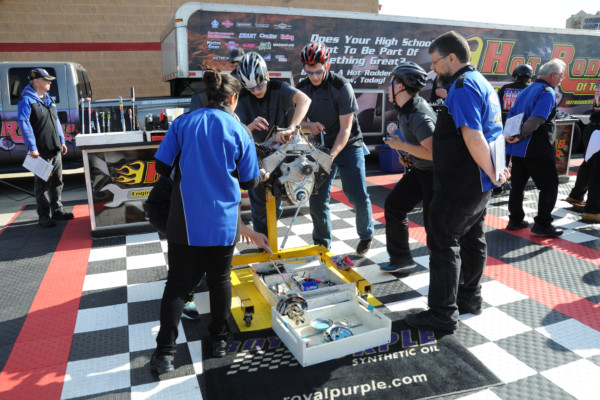 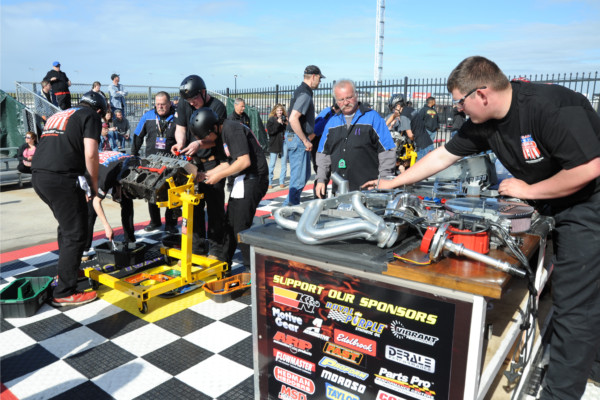 High school teams will once again compete in the Hot Rodders of Tomorrow Engine Challenge at Summit Racing’s Atlanta Motorama at the Atlanta Motor Speedway, April 22-23.

Four team members work together to tear down and rebuild a Chevy small block, while a fifth organizes parts and distributes tools. Engine building teams qualify to participate in the Hot Rodders of Tomorrow Dual Championships held at the SEMA show in Las Vegas and the PRI show in Indianapolis.

Judges make sure the engines are disassembled and rebuilt according to specific rules and torque specifications.

“You have to think outside the box sometimes,” Miranda said. “During each run the team is presented with some kind of problem they have to solve on the fly. These problem-solving skills are going to stay with them for the rest of their lives.”

It’s an intricate ballet of spinning speed handle wrenches and bodies weaving in constant, choreographed motion. Four team members remove components. The fifth acts as a surgeon’s assistant, keeping parts organized on a table and handing off the right tools.

Once stripped down to the camshaft, reassembly begins. The young technicians work together to rebuild their engines to original factory specs. Four judges scrutinize every step along the way, assessing penalties for improper disassembly, incorrect tool usage, dropped components, and other infractions.

Elite squads will complete the job in under 20 minutes—the result of months of practice. One of Miranda’s teams finished second at the 2016 Hot Rodders of Tomorrow national championship, recording an average time of 18:50 after four rebuilds.

Now in its 10th year, the nonprofit Hot Rodders of Tomorrow Engine Challenge program boasts more than 160 teams nationwide. They compete in regional events to qualify for National Dual Championships at the October/November SEMA show in Las Vegas and December PRI show in Indianapolis. The top eight teams (four from SEMA and four from PRI) go head-to-head at the finals in Indianapolis.

For students pursuing futures in the automotive field, there is more at stake than just trophies. The Hot Rodders of Tomorrow program has jumpstarted careers by awarding $15.5 million in scholarships, giving young men and women the opportunity to attend some of the country’s top technical institutions.

As coach for the last six years, Miranda has watched team members pursue careers in a variety of areas, from technicians to mechanical engineers. Someday, he hopes to see one of his students reach the engine builder’s dream job – tearing down and rebuilding a behemoth as part of a Top Fuel crew.