NORWALK, OH — The sign on Jan Snedaker’s roadster reads 1927 Studebaker, but very little of the vehicle actually is.

In fact, the only part from a ’27 Studebaker is the car’s front grille. The rest was fabricated from anything Snedaker could find.

“I used to own a second-hand store,” he said. “Every time I’d get a piece of metal I could use I would save it.”

He stockpiled bits and pieces and used them to eventually finish the four-year build in 2009.

The doors are made of metal from food carts. The body square tubing came from old exercise machines. The windshield posts are legs off a laundry cart. The body metal came from a Cleveland furnace, and he put the furnace logo on the front grille.

The top of the cowl is from a 1928 Chevy, and its sides are scrapped sheet metal. The vent is actually a lint trap from a Kenmore dryer.

He hand-built the frame from different tubing he had collected.

The engine, however, is legit. It was a brand new 305 Chevy that was still in the crate. He paid $275 for it. The previous owner had bought it new, tried to install it in his truck and promptly blew it up.

“I had to put rod main bearings and a crank in it,” he said. “And Comp Cam roller rockers.”

Since “completing” the car in 2009, Snedaker has added additional pieces, like the roof and surfboard.

“My son lives in California, so I like the surfboard look,” he said.

Of all the pieces he has used from other equipment, one part eludes Snedaker. He bought the headlights from a swap meet, but has never figured out what they were originally from.

“I’ve been trying to find out for seven years. No one has ever seen them,” he said.

Snedaker is from Sheffield, OH, so it makes sense that the few pieces of the car that weren’t fabricated came from Summit Racing Equipment. Snedaker is displaying the roadster at Summit Racing’s Super Summit Show this weekend, but you can see more pictures below. 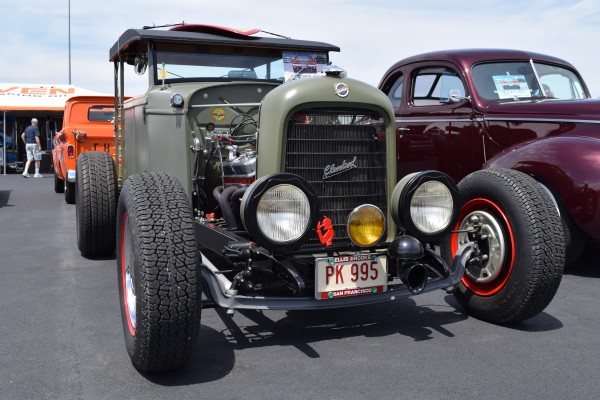 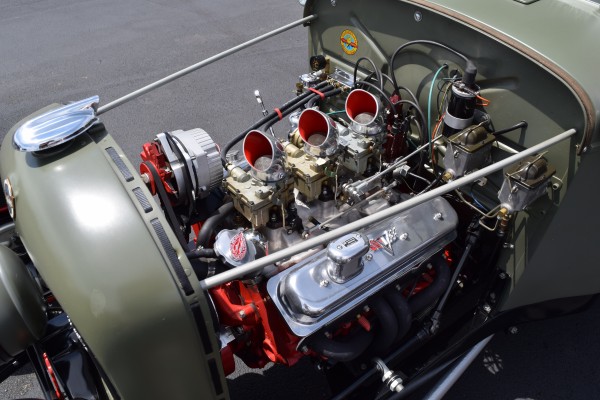