Reviving the Top-Oiler: Stuffing Big Cubic Inches into a 427 While Maintaining a Strictly Stock Look 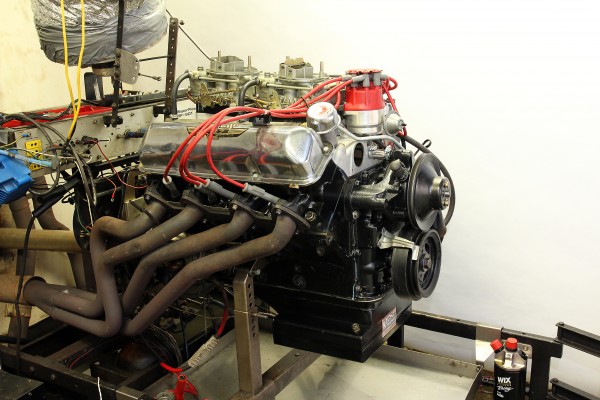 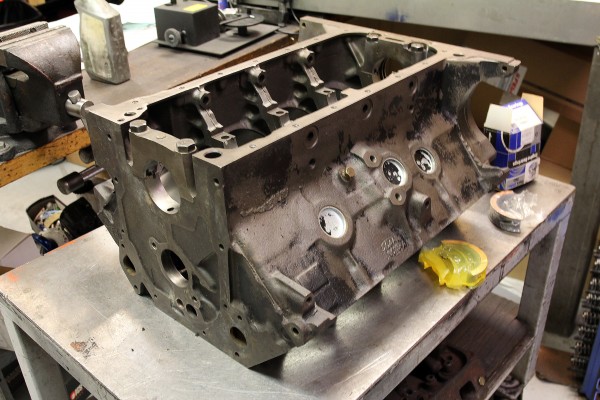 On the dyno the 427 top oiler sported a modern MSD ignition because the original distributor was still being rebuilt, but otherwise there is no visual clue that this is a 498 cubic inch beast producing 520-plus ft.-lbs. of torque over a broad range and a peak of 471.9 horsepower.

One of the defining features of the 427 is the deep skirted block which helps provide extra rigidity. Also, you can identify this as a top oiler because of the smooth sides between the screw-in freeze plugs and the oil pan rail. The side oiler has a bulge on the driver’s side to accommodate the oil gallery which provides pressurized oil directly to the crank journals.

The foundation for this build is a modern forged stroker crank--this one is from PEP--that bumps up the stroke a full inch from the stock 3.784 inches to 4.375.

KT Engines owner Ken Troutman worked with JE Pistons to come up with these forged slugs with enough dish to keep the compression in the 10.5:1 range so that the engine will live happily on pump gas.

Eagle provided the 6.800 long forged rods to connect the crank to the pistons. They use a big-block size big end (2.200 inches) to make bearing selection easier.

The FE and Cleveland engine families share the same main bearing housing bore diameter, so KT Engines uses a Clevite H (performance) bearing for the mains because they have a 180-degree oil groove which creates better protective oil wedge than FE main bearings with a full-round oil groove. Unfortunately, the bearing width is different, so they have to stick with the FE unit for the thrust bearing. This means purchasing two sets of bearings, but in the long run Troutman feels it’s worth it.

The purpose of the deep skirt is to allow for cross-bolted main caps for extra strength and rigidity. Ford’s engineers decided to use machined spacers that slot between the sides of the caps and the block. They can be a tight fit, so you may have to resort to a little “persuasion.” Also, each spacer is machined for its specific location, so don’t mix ‘em up!

The main bolts are torqued to 100 ft.-lbs. and the smaller side bolts go to 35--both with motor oil lubricating the threads. The side bolts will weep oil, so a dab of silicone underneath the washers and the head of the bolts is necessary to keep your garage floor nice and dry once the engine is in the car.

Instead of dealing with the old school rope seal to seal the oil around the rear main cap, KT Engines simply injects high-temp silicone into the slots, waits for it to cure and then cuts away the excess.

After measuring stretch to confirm, the rod bolts are torqued to 65 ft.-lbs. Rod side clearance is also checked, and they spec’ed out well with an average of 0.021 on each journal.

Oil pressure is handled by a Melling high volume oil pump. That’s a Canton pickup tube attached to the pump which mates to the high-volume Canton pan you can see in the background.

As mentioned earlier, the 427 top oiler has no provision to provide hydraulic lifters with oil, so you’ve got to go solid. But that’s no big deal if you are willing to check your valve lash occasionally. Here, Blackwell drops in the Comp Cams Endure X solid rollers which were chosen because they are lightweight but also tall enough to clear the link bars over the lifter bores so modifications to the block aren’t required.

Fel Pro gaskets were used throughout the build.

Since the engine has to stay absolutely stock on the exterior, the original cast iron heads are cleaned up and bolted back on. In fact, the owner wanted to be able to return the engine back to purely stock trim inside and out later if he wanted, so the head hasn’t even been ported. Up top are a set of Comp Cams valvesprings weighing in with around 200 pounds of pressure on the seat and 480 fully open.

The 427 doesn’t provide oil conventionally to the valvetrain through the lifters and pushrods. Instead, here you can see the port that opens to the top of the cylinder head right beside on of the bolt holes for fastening the rocker stand. Oil exits this port, travels up the rocker stand around the bolt and feeds the rocker arms through the rocker shaft running the length of the head.

Another unique feature of Ford’s FE engine family is the intake manifold actually forms part of the base for the valvetrain. The rocker arms cannot be bolted up, nor the pushrods dropped into place, before the intake manifold is installed. This is an original Ford dual quad aluminum intake for this engine.

Once the Harland Sharp rocker system is bolted up, the rockers are lashed to 0.018 for the intake rockers and 0.020 for the exhausts.

All the linkages and the fuel feed system for the dual quad carbs you see here are all original.

On the dyno the 498-cubic-inch 427 made tons of torque all day long and was happy doing it. Considering that this engine still uses the original cylinder heads, intake, carburetors and more, punching out over 470 horsepower on pump gas is pretty impressive.

The 427 is one of Ford’s most successful and iconic engines. With its 4.630-inch bore spacing and characteristic deep skirted block, the 427 slots right into Ford’s FE family of engines. But unlike its brothers, this powerplant was designed specifically for racing.

When it was first introduced in 1963, the 427 took the racing world with a bang. That first year, Ford won 23 races in NASCAR — including the Daytona 500 — with the brand-new engine. That was four better than any other manufacturer with their established engines.

Unfortunately, a serious weakness in the 427’s design was discovered fairly quickly. The block routed the oil first to the camshaft before it eventually made its way to lubricate the crank journals. During extended high-rpm operation, the lack of priority oiling to the crank would sometimes lead to a spun bearing.

Obviously, this was no good for NASCAR competition, which is all about pushing an engine to its limits for several hundred miles at a stretch. So Ford updated the original 427, the “top oiler,” to the side oiler in 1965. The side oiler prioritizes oil supply to the crankshaft first before feeding the cam and valvetrain, and that solved the 427’s issues for NASCAR racing. The side oiler is easy enough to identify because it has a hump in the block casting for the oil gallery on the driver’s side running lengthwise just above the pan rail.

If you aren’t planning on spending a few hours making laps at Daytona, the top oiler is actually an excellent engine. Plus, if you are trying to source one they can often be had cheaper than the more famous side oiler.

Recently, we spent some time at KT Engine Development in Concord, NC, as they restored and upgraded a top oiler 427 that will be going into a classic 1964 Ford Galaxie. The owner — like most of us — wanted a bit more power, but he also wasn’t willing to sacrifice the bone-stock look that went with the rest of the car.

So KT Engines set about stuffing an absolutely ridiculous amount of inches into the block without changing anything on the outside of the engine. What they wound up with is a 427 with an astounding 498 cubic inches of displacement that is capable of gobs of torque and very respectable horsepower — all without a single exterior clue that this is anything but a tame stock rebuild. Even with the stock iron cylinder heads and dual OEM four-barrel carbs, this beast produces an astounding 500-plus ft.-lbs. of torque all the way up to 5,000 rpm and hits its peak 471.9 horsepower at 5,300 rpm. And while the less informed may poo poo the top oiler for its more famous side-oiling brother, this engine package will produce reliable performance in a street machine for years before needing a rebuild.

To see how the 498-cubic-inch top oiler came together, browse the slideshow at the top of this post.

8 responses to “Reviving the Top-Oiler: Stuffing Big Cubic Inches into a 427 While Maintaining a Strictly Stock Look”