Search the Internet about it and you’ll quickly find that failing knock sensors in LS-powered GM trucks are a common occurrence. Replacing a knock sensor may seem like a daunting task once you find out that you have to remove the intake manifold. Thankfully, intake manifold removal is much easier on an LS engine than a Gen I small block, and if you plan ahead and take your time during the job, it’s actually quite easy.

Despite spending over 20 minutes test-driving the subject vehicle used in this article, it wasn’t until 20 minutes into the drive home after making the purchase that the check engine light (CEL) came on. We worried not, as the truck drove fine and the gauges noted that coolant and oil pressure were in the normal range. Later on, we made a trip to the local auto parts store to have them scan and read the trouble code only to find out that the power ports were not functioning, which is a requirement for the OBD II port to function as well. We simply replaced the fuse and were able to get it scanned. The outcome of which was a faulty knock sensor code.

While the issue was apparent, the actual sensor replacement got neglected for some time, largely due to the perceived “invasive” nature of the procedure. As we found out, it was actually pretty easy, especially after researching the job online and gathering all of the necessary tools and parts to complete the job. Needing a bit of a push, the water pump elected to check out, so while that was in need of repair as well, it couldn’t have been a better time to tackle the knock sensors.

From the research gathered on various forums and YouTube channels, it was recommended to replace both knock sensors at the same time, as well as the harness that connects them to the main harness. The rear-most sensor is usually the one that fails the most, but both are susceptible to the same issue. Namely, the rubber molded plugs that are supposed to seal them up become dry and hard over time. They also shrink, which in turn allows moisture to collect in the tub that the sensor rests in. The harness that connects the sensor is also prone to fail as it becomes dry and brittle from the engine heat. The plug on the end of the rusty sensor also rusts. It’s relatively inexpensive and well worth the piece of mind that comes with replacing it.

One option was to leave the fuel line connected, but to remove the fuel rails—with the injectors still attached to them—from the intake manifold and just move them out of the way enough to slide the intake out. Feeling that it was a safer bet to not chance ripping or losing any injector O rings, it was decided to disconnect the fuel line and leave the rails and injectors attached to the intake. It may be hard to do, but we would also suggest getting a vacuum in between the valve covers and the fuel rails to try and remove as much debris as possible before pulling the intake manifold. What you don’t get will likely end up in the intake ports during intake removal, and then you’ll likely have to create a smaller attachment to get into the ports to remove the debris—don’t ask how we know.

We were able to procure everything needed to complete the task through summitracing.com. The sensors, the harness, the intake gaskets, the hand-held scanner and more were all sourced from one place, which is always a nice way to get things started. If you aren’t already aware, Summit Racing is way more than just speed parts. The company carries a multitude of tools and stock replacement parts as well.

Anytime you have to do a job that you haven’t done before, it’s always good (funds permitting) to make a few new additions to your tool box. We had a rudimentary set of fuel line disconnect tools, some of which were broken, and all of which proved difficult to use. To solve that issue, we ordered a master disconnect set and a set of disconnect pliers so we would have a number of options as well as some muscle to get the fittings separated should they be stubborn.

Also in the upgrade, or rather the add column, was the Actron Elite Auto Scanner. If you work on numerous vehicles across many brands, buy as much scanner as you can afford since you’ll be able to read, diagnose, and erase trouble codes from various vehicles. With all of the necessary items in hand, it was time to go CEL-free on the dash.

Scroll through the slideshow below to see how we knocked out this knock sensor replacement step by step. 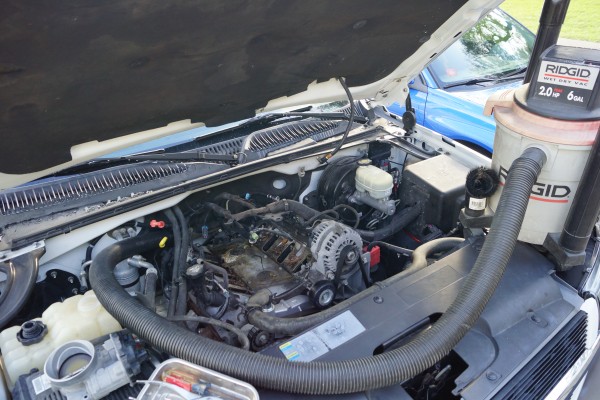 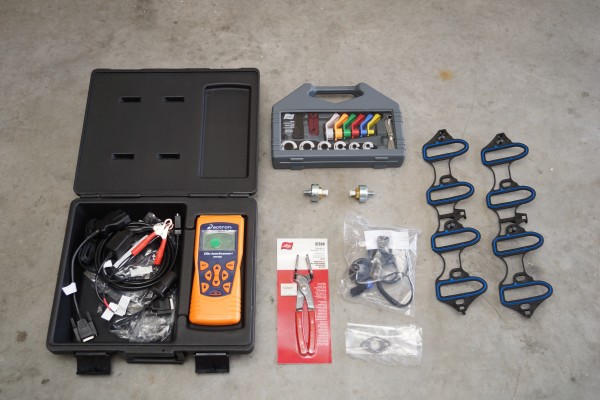 Knock sensor replacement on your Chevy/GMC Silverado/Sierra/Tahoe etc. is an easier job than you think.

Jumping onto the Summitracing.com website, we were able to order everything we needed to complete the job. From the tools to the replacement parts, Summit had many options for us to choose from.

After plugging in the Actron Elite Auto Scanner, we simply needed to follow the prompts, starting with the make and model of vehicle.

The eighth digit in the VIN gave us the correct engine code.

Getting to the heart of the problem, we scrolled to diagnostic codes.

As the air intake tube had already been removed due to the water pump installation, it was straight to the beauty cover with the socket.

An 8mm socket allowed removal of the beauty cover.

Underneath the cover is this attachment plate. There are three fasteners; the one at the back will require a wrench as there is not enough room to get a socket and ratchet in there.

Now it’s time to start disconnecting everything, starting with this vent right behind the throttle body. This truck, being a drive-by-wire model, thus does not require removal of the throttle cables.

Unbolt this purge valve next—you’ll need to snake it and the plastic line attached to it, out from under the fuel rail.

Remove this fastener holding the main wiring harness to the intake.

Taking a break, it’s time to depressurize the fuel system. Remove the cap, cover the orifice with a rag, and gently release the pressure by using a screwdriver or other implement to depress the valve. There shouldn’t be too much that comes out, and waiting to do this after the engine has had time to cool down will help.

Disconnecting the fuel injectors is a bit tricky, as you need to depress this safety clip and remove it before you can unplug the injector.

The alternator connector needs to be unplugged as well.

On top of the intake manifold and towards the rear is the knock sensor harness. Unplug it and unclip it from the manifold, as you’ll be replacing this.

We did find one guy that was able to remove the throttle body without disconnecting these coolant lines, but since this cooling system was empty from the water pump change already, we opted to remove the lines to make things easier.

Remove this vacuum line from the right side of the intake manifold.

Next, disconnect the vacuum line to the brake booster.

Disconnection of the fuel line is next. First, remove the safety clip.

We were lucky in that the first tool we tried on the fuel line popped it right off. The handle on this particular tool gave us some much-needed leverage.

Three nuts and the throttlebody came right off. Take care not to damage the gasket.

The last thing that should hold you up is this plug at the very back of the intake manifold. Just disconnect it and be sure you don’t forget it upon reassembly.

Carefully lift straight up on the intake and then begin to pull it forward while lifting the front of it up. It may catch on things here and there, so having an extra set of hands and eyes comes in handy at this point.

As you can see, it is trash city down here with the intake manifold off. Not having vacuumed prior to the manifold removal allowed some debris to fall into the intake ports. Be sure to remove any debris prior to reinstalling the intake.

It would seem that more than just the knock sensors met an untimely demise in this environment. When you go to pry up on the plug, you’ll notice how hard the rubber has become, and it may even swivel or wobble in the hole, which indicates it is no longer sealing properly. Once the plug is up, the harness may disconnect itself, but if it doesn’t, just squeeze it until it comes loose.

Here is the rear sensor, and as you can see, it has seen better days.

The front sensor faired much better, but we’re not leaving anything to change. A 22mm socket is needed to remove the sensors. The new sensors (PN DFP-AS10017) are to be torqued to 15 ft-lbs, but many torque wrenches start at twenty. You can wing it and hope twenty is accurate and sufficient, or see it as an opportunity to add another tool to the chest and pick up an inch-pounds torque wrench. 15 ft-lbs equals 180 in-lbs. Attach the new harness (PN RNB-917-033) and route it out the back of the lifter valley.

Per GM’s recommendation, apply a bead of RTV sealant around the front half of the knock sensor plug. Some choose to completely seal it, but we imagine there is a reason for GM’s specification.

The new intake gaskets simply clip onto the manifold so you don’t have to worry about sticking them to the cylinder heads with RTV before you drop the manifold on. This design makes for an easy clean up upon removal, which we performed but opted not to show. The torque sequence for tightening the manifold bolts is as follows—44 in-lbs on the first pass and 89 in-lbs on the second. Reverse the disassembly steps carefully and you should be good.

As we had erased the code after reading it, upon start up, we were greeted with a CEL-free instrument panel.