Interview: Greg Anderson and Jason Line on NHRA’s Pro Stock Changes and What They Learned in Bradenton Why wouldn’t they? The Summit Racing/KB Racing teammates have six NHRA world championships and 115 national event victories between them, so they’ve become accustomed to success on the track. Expectations are high once again for the 2016 NHRA season, but a recent test session in Bradenton, FL had the two accomplished racers ecstatic about something even most commuters take for granted.

To be fair, it did so much more.

Such is that state of NHRA Pro Stock racing, where teams are scrambling to succeed under new rules that mandate a change from the traditional carbureted Pro Stock setup to NHRA-specified throttle body fuel injection. There is also the matter of the required 10,500 rpm rev limiter, front-mounted air inlet, and shorter wheelie bars.

It has been baby steps for most teams as they make the transition from carburetor to fuel injection. However, the Summit Racing/KB Racing team took a major step forward this week when they made their first test passes with their new fuel-injected setup. Once they were over the elation (and relief) of the car starting, Anderson was able to put down several solid passes, including a run of 6.54 seconds at 211.98 miles-per-hour, in the Summit Racing Camaro.

OnAllCylinders: Were you surprised at the time you were able post in Bradenton?

Jason Line: I think we were pleasantly surprised. The air is really good down there so I think if you’re ever going to go fast, it’s going to happen in a place like that. I’m not sure the numbers mean a whole lot but at the same time, it’s probably a little faster than we thought it would run. We were pretty happy with that.

OnAllCylinders: Having said that, it seemed to be a pretty good starting point. How quick do you think these cars will eventually be with the fuel-injected setup?

Line: We’re a fair amount slower than we were last year, which you’re going to be. It’s going to take a while. As much as the carburetor gets hacked on for being archaic, it’s still a very viable way to make good power. So you’re not going to just bolt fuel injection on and make as much power — it’s not going to happen. But obviously, there’s still some latitude with working on the engine, as far as manifold design goes, to make it better. So it’ll get better for sure. I think a month from now, six months from now, the cars will be considerably faster. Will they be as fast as they were with carburetors? I think eventually for sure, but it’s just going to take a little while.

OnAllCylinders: Did anything surprise you about this initial round of testing?

Greg Anderson: The drivability was a bit of challenge and will be a challenge for a while. It’s a bit tricky to operate the throttle. It’s not as smooth and easy as it used to be with the carburetor setup so it’s a new learning curve for the driver. The drivers are probably going to look a little silly for a while, but we’ll get that ironed out and learn how to drive them properly. We got some seat time in for that and we definitely advanced, and we’re glad we’re going to have another test before we go to Pomona because I think we’ll get a snicker or two out of the grandstand about the drivability of these vehicles right now. But it’ll get better through time. You’re just going to have to grin and bear it for a while and not be so vain or worry about people snickering at you, I guess.

OnAllCylinders: Speaking of Pomona, the first race is right around the corner now. What are your expectations based on what you’ve seen so far?

Line: At this point, because you know the date and when you have to be in Pomona, we had to set short-term goals and long-term goals and use our time as wisely as we could to go forward and make power. When we started, the engine was off by a massive amount of power, so the goal was to get it where it was capable of when it was carbureted. But right now, we’re just trying to get it as close to that as we can. We’ve made big strides — we only had one direction to go, really — but it is considerably better than it was the first day of dynoing for sure. Going to this first test — there were certainly a lot of reservations going in because it’s the unknown that kills you. For us, the whole thing was an unknown, and again, the test went surprisingly well.

Anderson: We’ve got a pretty deep boneyard of parts already — parts thrown in the corner that didn’t work out. We’ve come a long way in the last month, but it’s definitely blown by. We looked at the calendar on the way home last night and realized we’re two weeks away from the truck leaving to go out West. So we’re already out of time, and it’s time to finalize your best package and get enough engines to go and hope we brought enough. I think everyone has had to lower their expectations for Pomona. A couple of the competitors have already said maybe the winner of Pomona may be the guy whose car starts four times in a row. And that’s why we think our test went better than average.

(Check out exclusive in-progress photos from the KB Racing shop below. —ed.) 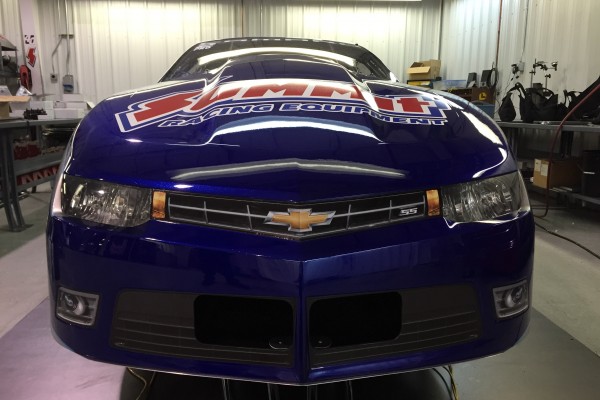 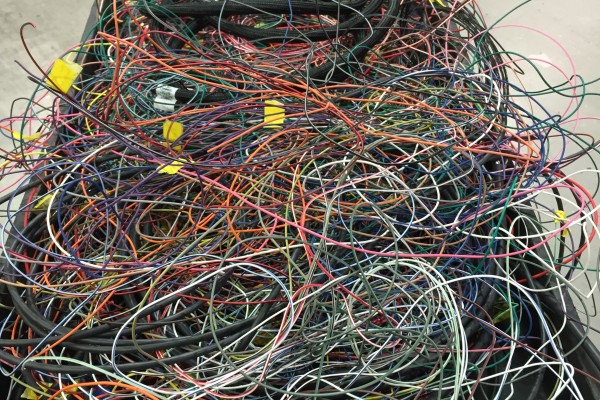 OnAllCylinders: You’ve been running a carbureted setup for so long, did you enlist the help of any fuel-injection specialists or add a specialist to your team?

Line: Yeah, we had heard of this EFI; we knew it existed! We were just learning how to spell carburetor and then we had to go to fuel injection!

No, we have no experts, but we know a lot of folks in the industry. We got some tutoring, and I think the rest is going to be up to us. You can’t depend on getting babysat the whole time. You’re going to have to dive on in and figure it out.

Anderson: These engines are definitely a completely different animal than what fuel injection has ever been on before. There really aren’t going to be any experts on this type of setup. Yeah, there are lots of people that know about fuel injection but not necessarily the way it pertains to these type of engines…with this type of throttle body…and this type of air inlet. So nobody’s going to have all the answers. You’re going to have to learn as you go — and that’s kind of exciting. We’re going to embrace it and try to do a better job than everyone else. It’s opened up a whole new avenue of trying to get an advantage on someone, we think. And that’s kind of cool! We’ve always enjoyed a challenge. The bigger the challenge, the better, and this is absolutely a huge challenge.

OnAllCylinders: It’s a massive undertaking. Where did you even start?

Line: Obviously, we got a unit and built a manifold, but the process  is probably a little different than a lot of the other teams because I think it’s a fairly well known fact that we run our engines a little bit differently than everyone else — at higher engine speeds. That, coupled with the rev limiter rule, has made it a pretty major undertaking for us. It isn’t that we can simply put a fuel injected manifold and go racing. It doesn’t work like that.

OnAllCylinders: Since you have traditionally run your engines at high speeds, how big of a challenge has that 10,500 rev limiter rule been?

Line: We’ve certainly run engines at low engine speeds before, so to make an engine make power at those speeds, we at least know what direction to go. That’s not as big a challenge as just learning the fuel injection and bringing the air into the front of the engine.

OnAllCylinders: So, aside from the switch to fuel injection, is the front air inlet the biggest challenge right now? A look at the mandated Pro Stock induction for 2016 (click to enlarge).

Anderson: That’s probably the biggest difference — and what’s probably throwing the biggest kink into the whole deal. Bringing the air into the front of the engine makes it very difficult to distribute the air to all eight cylinders versus the way you used to do it from the top. That’s going to be the biggest challenge, and we’re learning every day what it likes and what it doesn’t like.

OnAllCylinders: And it’s a challenge that will evolve as air and track temperatures begin to rise, correct?

Line: Probably. Again, it’s going to come to learning how to tune the engine for all those different conditions. It’s going to be a challenge, and the truth is we don’t know all the answers yet. I think the night session will probably make a bigger difference now than in the past.

Anderson: There’s definitely going to be a penalty when it’s hot out. Obviously this time of year, we can’t test in those conditions anywhere, so there’s going to be a learning curve as it warms up. But it’s definitely going to be a penalty. The reason the cars are slower right now is not just because of the switch to fuel injection. It’s because of all three of those changes. It’s making the air come in from the front of the cars, it’s the fuel injection, and it’s the rev limiter on the car. It’s really three major things that are contributing to making the cars slower right now.  But those are three areas we’ll continue to work on and hopefully get the performance back almost to where we used to be.

OnAllCylinders: After years of having the big Pro Stock hood scoop, have you gotten used to the new look of the cars?

Anderson: The first time I rolled up there to the stage beams (in Bradenton), I thought: “They moved the Christmas Tree back 20 feet at this track. I wonder why they did that!”

It never even dawned on me that I wasn’t looking around the hood scoop anymore and that’s all that was different. You just weren’t trying to look around that big ol’ hood scoop. It made the Christmas Tree seem like it was a whole lot closer to the driver, which I think will be a good thing. Now we just got to train our minds not to see too many things. This will open up more things to catch your eye and distract you so you’ll have to train ourselves for that. As far as seeing the Christmas Tree, though, it’ll probably be a little better!

(Editor’s Note: The video that was originally attached to this post has been removed — we apologize that it is no longer available.)

6 responses to “Interview: Greg Anderson and Jason Line on NHRA’s Pro Stock Changes and What They Learned in Bradenton”