In early 1968 Craig Breedlove was hired by American Motors to show off the new AMX. Breedlove drove two specially prepared AMXs to the limit at a Goodyear test track outside of San Antonio, TX. When the dust settled, AMXs set over 90 USAC class C records and 16 new class B records, and impressions were cemented in the minds of young speed freaks.

Those magazine images of AMXs hot-footing it around the racetrack left a deep impression on a young Doug Kinney. The Canadian logger got his first AMX in 1973. His older brother swapped a 1967 Corvette for a 1970 AMX 390 with a four-speed; he drove it home from Ontario, then parked it. That’s when Kinney struck a deal for it.

That first AMX was no beauty.

”It was an east coast vehicle, and even though it was only a few years old, she was a rust bucket,” Kinney said.

In 1976 Kinney added a second AMX, a 1969 in brown with a four-speed and a 390. He topped the motor with a B&M blower and swapped in an automatic to go drag racing.

“This one was a from an auto wrecker,” Kinney said. “The car had a front impact that was so hard the gear lever cut the floorboard about 6 inches to the rear. She was fun to watch. By adding a line lock I could really smoke the tires at the stoplights.“

By 1978 Kinney was a full-blown AMC addict, scavenging parts from all corners and looking for Javelins and AMX models in any condition. AMC gear was next to impossible to find in Canada in the late 1970s, and Kinney became a savior for AMC enthusiasts in Canada and the Pacific Northwest of the USA.

During that time Kinney acquired two more cars—a 1969 SS Javelin he still has today and a Beal Street Blue AMX with a 343 V8 and a four-speed transmission. That car was originally purchased by a Canadian Air Force pilot and was shipped and delivered to the AMC dealership located on the pilot’s base in Germany.

Off to New Zealand

Kinney met his wife, Faye, in 1986. Shortly afterwards, the pair moved to Faye’s native New Zealand accompanied by a container full of forestry gear and one of his beloved AMXs. Kinney sold off most of his parts stash but kept enough parts to keep his cars running, including things like windshield wiper motors, glass trim, side mirrors, and interior parts that would not be available overseas.

Kinney spent seven years restoring the ’69 AMX he bought in 1976. It was repainted bright green and modeled after the special edition “Big Bad” AMXs AMC offered in 1969 and 1970. When that car was done, Kinney had the Beal Blue AMX shipped over from Canada, which he restored as a Big Bad car in orange.

The restorations quickly depleted his parts reserve, so Kinney began searching for parts to keep his herd running. He acquired contacts in the USA, Canada, and even Australia via the Internet. People began offering up their former AMC treasures, happy that the cars were going to someone who appreciated them.

Kinney acquired two more AMXs while in New Zealand. AMX Number Three was a ’68 found on a trip back to Canada. Sporting factory sidepipes, the car was manufactured in the US but assembled at a Canadian AMC plant, making it fairly rare. Kinney restored it as a tribute to a factory 1969 Super Stock AMX that raced in Canada in the late 1970s.

The fourth car was a genuine Big Bad AMX in blue. One of 195 made, this one came with the 290 and a four-speed. With four cars in the stable, Kinney figured he was finished collecting.

A fifth AMX found its way to New Zealand, which Kinney decided to restore to look like the 1968 Craig Breedlove car. Kevin Johnstone of Chevelle Motors in Gisborne, New Zealand rebuilt a stock 390 to power the Breedlove tribute. Kinney dusted off one of his prized parts, a true Super Stock AMX Holley crossram dual quad intake, to top off the 390.

In 2014, Kinney’s AMX focus turned to Australia. From 1960 to 1978, American Motors contracted with an Australian company, Australian Motors International (AMI), to assemble cars from kits imported from the USA and sold under as Ramblers. Twenty four of those cars were 1969 model AMXs equipped with a 343-cubic-inch V8, automatic transmission, power steering, a hand-built woodgrain dash with a custom stereo, and console shifter.

Kinney’s son Lucas found the #15 AMI AMX listed for sale on an Aussie website. The car was in rough shape but was numbers-matching. After talking to the seller, Kinney took the plunge and bought it sight unseen.

In one of their conversations, the seller had casually mentioned the car was an ex-movie vehicle, appearing in a little film called Mad Max, painted as a Main Force Patrol (MFP) Pursuit Special. There is a lot of debate in OZ over whether that is true, but Kinney decided to have the AMX painted in the Mad Max paint scheme instead of the original white.

After clearing customs in New Zealand, the #15 AMX was taken to panel beater and painter Dillon MacGregor’s shop. The car looked to have been in a past wreck and required a lot of attention to make it right again. You can see a thread on the build over at the AMC Forum: http://theamcforum.com/forum/mad-max-is-alive-again_topic66323_page1.html. You can also read about the car and the other 22 right hand drive AMX survivors in Australian Muscle Car Issue 79.

Photos of the AMX in MFP colors popped up on the Internet just in time for the release of the new Mad Max: Fury Road film. Most people who saw the AMX loved it, but it was no surprise that a few purists voiced their disapproval of anything but an Australian Ford Falcon wearing the MFP badge.

As of this writing, Kinney is working with AMC engine specialists at Bulltear to drop a built 401-cubic-inch motor into the MFP AMX, possibly with a Vortech supercharger. That should drive the Mad Max diehards into quite the tizzy.

But the saga of #15 doesn’t end here. Kinney recently acquired the second AMI-built AMX from the president of the Australian AMC Club. Along with the car came a classified ad from 1977 offering the #15 AMX as an experimental car with a possible shaded history.

We’ll get more into that when we do an update on the Mad Max AMX. For now, scroll through the slideshow to check out some of Kinney’s collection. 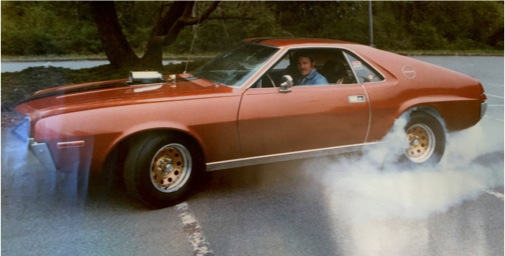 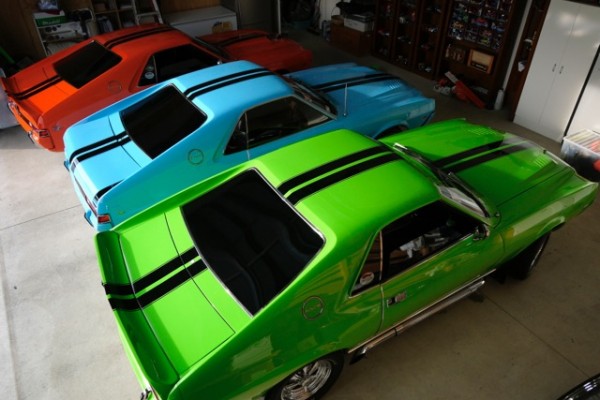 This 1969 AMX was Doug Kinney’s second, purchased in 1976. It came with a four-speed and a 390, but Kinney ditched the stick trans for an automatic and topped the motor with a B&M blower to go drag racing. “She was fun to watch—by adding a line lock I could really smoke the tires at the stoplights,” Doug told us.

AMX Number Three was a ’68 Kinney found during a trip home to Canada. He restored it as a tribute to a factory 1969 Super Stock AMX that raced in Canada in the late 1970s. The SS AMXs were factory race cars, much like Ford’s Cobra Jet Mustangs. The 390 engine was equipped with twin Holley carburetors and 12.3:1 compression-ratio cylinder heads, plus aftermarket headers and drag slicks. American Motors rated the car at 340 horsepower, but the National Hot Rod Association ultimately rated it at 420 horsepower for competition in SS/G, SS/D, and SS/C classes. The best time recorded for an SS AMX was 10.73 seconds at 128 miles-per-hour.

Kinney redid his fifth AMX as a tribute to the 1968 Craig Breedlove car. The car in the middle is the second AMX ever built in Australia. The 343-powered car was built by Australian Motors International (AMI) from a kit imported from the USA. Sold as Ramblers, only 24 AMXs were assembled by AMX, all 1969 models.

The #2 AMI AMX was simply rolled into the showroom and polished up for enjoyment. Kinda strange to look at such a familiar cabin with the steering wheel located on the opposite side, eh?. Note the hand made dash.

Kevin Johnstone of Chevelle Motors in Gisborne, New Zealand smiles as he gets dirty while breaking down a set of 390 heads for the Craig Breedlove tribute car. Kevin spent about 20 hours reworking the heads for maximum flow. Kevin used to have a hard time finding parts for American car restorations, but good old Summit Racing fixed that problem. “Summit Racing has been a lifesaver for keeping classics rolling here in New Zealand,” Kevin said.

Kinney posing with the #15 AMI-built Australian AMX. The car was painted brown when he bought it, but the seller mentioned the car had appeared in the first Mad Max movie, painted as a Main Force Patrol (MFP) Pursuit Special. There is still a lot of debate over whether that is true, but Kinney decided to have the AMX painted in MFP colors.

Photos of the repainted #15 AMX appeared on several forums. Most people loved it, but Mad Max diehards dismissed it as a wannabe. Whatever, we say. Kinney is currently working on a 401 cubic inch motor for the car, possibly topped with a Vortech centrifugal supercharger. Now that’s fun.

This Australian market Johnny Lightning diecast is the closest link between Kinney’s AMX and the Mad Max film anyone has found so far. The Hot Wheels scale car is labeled as 1969 AMC AMX Pursuit Special. Pursuit Specials were a notch below the supercharged Interceptor V8 Falcon XB driven by the movie’s hero, Max Rockantansky.