Trailer Trio: The 3 Best Improvements That Can be Made to a Race Trailer 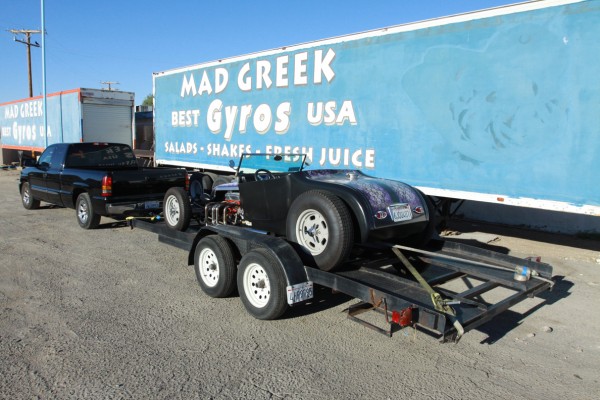 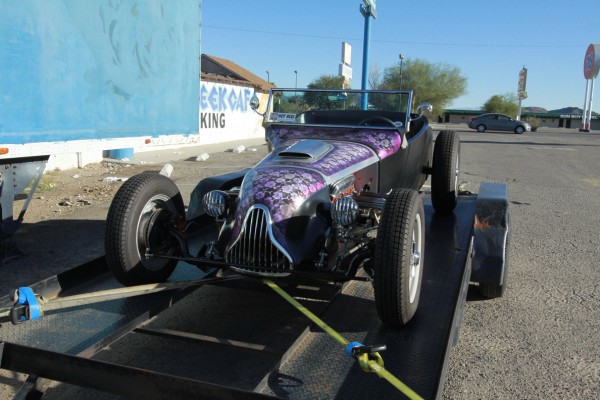 Here’s the trailer in its original configuration on the way back from SEMA 2015. Even with the track T’s light weight, we were concerned with the age of the bias-ply tires causing a failure.

Notice the aged appearance of the tie-down strap on the passenger side. Tie-down straps do not last forever. It’s a good practice to renew before the strap shows signs of wear.

At a casual glance, the tread on this tire appears good, but a closer inspection reveals the tread wear bars indicating this tire is no longer safe.

Any time wheels are removed from a car trailer to replace the tires, you should also inspect the brakes and wheel bearings. Spin the brake drum by hand to ensure the wheel bearings turn freely without noise. Feel for excessive slop.

Guilty as charged. It was not a safe idea to run this wheel without a dust cap. Dirt and grime causes premature bearing wear and likely a wheel bearing failure.

A taillight was always out. Vibration and shock made keeping the brake and taillights lit with ordinary incandescent bulbs near impossible. Replacing with LED trailer lights means the lights always work and the trailer is much more visible.

Removing the old taillights required taking off two ¼-20 nuts. It’s not uncommon to have different color-coding for the brake and taillights. Cutting the trailer harness in this manner made it easier to keep wires from getting mixed up.

Installing the Summit Racing LED trailer lights was a direct bolt-in making sure to snug, but not over-tighten, the mounting nuts.

We tested the connections to make sure they were hooked up correctly for brake and running lights before crimping the electrical connectors.

After the Summit Racing LED taillights and LED DOT marker lights were installed, a final inspection was made to ensure no wires from the trailer’s wiring harness were hanging in harm’s way.

Notice how the weight of this 1966 Chevelle Malibu doesn’t phase the sidewalls of the Carlisle radial trailer tires.

Here again, the axle straps make it a lot easier to tie the rear end of a car down.

Up front, the axle straps fit through the frame crossmember where the ends of a typical ratcheting tie-down are too large to fit.

Beyond being properly equipped, how well a car trailer tows is determined by ensuring the tongue is at the right angle. This is controlled by where the car is placed on the trailer and the angle adjusted by moving the car forward or backwards.

Four tie-downs: A tie-down at each corner in an X-pattern reaching across as far as possible is the best way to secure a car onto a car trailer.

An extremely heavy car, this 1969 Buick Riviera towed with ease thanks to radial trailer tires and four good heavy-duty tie-downs.

Another very heavy car, this non-running 1964 Chrysler 300K had to be pulled onto the trailer backwards. To overcome a heavy nose, it was placed farther forward to get the correct balance.

Whether it’s to haul a new project car home or protect a show car from the elements, one of the handiest pieces of equipment a gearhead can own is a car trailer. That said, a car trailer is only handy if it’s in tip-top shape and ready to roll at a moment’s notice.

We’ve owned our tandem car trailer since 2006. We lost count of how many vehicles we’ve hauled on it, but we’d estimate it has traveled at least 20,000 miles during that time. It was not so much the miles, but the period of passed time that motivated us to service the trailer. During this servicing process, we discovered three modern upgrades that greatly improved how easily the trailer loads and tows.

To report an accurate evaluation of the changes made to the trailer, this article was written six months after installing the Carlisle radial trailer tires, Summit Racing LED taillights, and tie-downs with axle straps. After installation, we racked up many miles hauling a 1927 Ford Track T, 1966 Chevelle, 1988 Chevy C/K pickup, 1951 Ford F-1, 1964 Chrysler 300K, and a 1969 Buick Riviera.

The top improvement was a new set of radial tires. The switch from bias-ply to radial trailer tires has been nothing short of miraculous. Where the bias-ply tires had a tendency to wag the trailer increasingly as the speed rose, the radials tow dead straight under all conditions at any given speed. Remember, a wagging trailer can quickly turn into a jackknifed trailer.

Three easy, quick, and very affordable improvements made a world of difference for our car trailer. Check out the slideshow above to see how they can transform your trailer, too.

3 responses to “Trailer Trio: The 3 Best Improvements That Can be Made to a Race Trailer”