Every project car encounters a speed bump along the way.

Sometimes it’s a part that doesn’t fit quite right the first time, or some missing fasteners, or maybe the instructions were upside-down. But sometimes the whole car becomes one big speed bump.

Elmer Bischoff is a second-generation car guy, having learned to swap engines and other tricks of the trade as a wee lad helping with his dad’s Model T collection.

“I did my first paint job when I was 13,” Bischoff said. “I ended up with more paint on me than on the truck, but the truck turned out alright!”

Growing up, he built and raced in almost every classic American muscle car.

“My last car was a 1968 Camaro, and, well… I just didn’t fit in it the way I used to. I wanted to put together something a little more comfortable to cruise in, but still with some muscle.”

One of Bischoff’s friends happened to own the ideal vehicle: a low-mileage 1970 Chevy Chevelle SS. He was interested in Bischoff’s Camaro. The deal took a long time (and several six-packs) to work out, and Bischoff is a little hazy on the details, but one morning he woke up and the Chevelle was parked in his driveway.

His original plan was to simply fix the car and restore the factory forest green paint and white stripes. But, as he started poking around, he found little problems with the body, started taking it apart, and found even more problems. Soon, the whole body was off the frame, and Bischoff said he would restore it using only original sheetmetal.

“My son Stephen started talking some sense into me,” Bischoff said. “He told me, ‘Since you have it apart, you might as well make it the hot rod you really want, rather than a plain old resto car. And paint it your favorite color: blue.’”

Bischoff brought a talented local car guy named Russ Coffey to his home garage to help with the body and mechanical work.

“I’d seen his incredible work at a bunch of local car shows, and I needed the very best for this project. He was a little hesitant at first, but I kept hassling him until he showed up.” Bischoff’s brother Rick, his son Stephen, and several other friends also chipped in over the course of the three-year build.

The current 454 was feeling pretty tired, so he called his cousin Tony Bischoff at BES Racing Engines for a serious upgrade. Out with the old, and in with a Merlin big block Chevy V8, overbored to 565 cubic inches, and equipped with Dart Race heads, an Edelbrock Super Victor intake manifold, a huge Quick Fuel QFX-Series carburetor, MSD ignition components, and more.

“The real trick was to get it all to fit under a stock cowl hood,” Elmer Bischoff said. “It took quite a while to find the right air cleaner, and get it to fit up into the original recess in the underside of the hood.”

But none of the mechanical challenges in this project would compare to the emotional rollercoaster of selecting the right shade of blue paint.

“I remember looking at hundreds of shades of blue. No pre-made color could make me happy, so we spent weeks agonizing over custom mixes.”

Finally with the help of Russ Coffey he selected a color.

“We painted the underside first and I remember lying there on the floor, staring up at it, and wondering if it was really right,” Elmer Bischoff said. “Russ is pretty laid back, but even he started to get fed up with me! I took his advice and stuck with it, and I’m so glad I did. That color caused us so much trouble, we had to name it Misery Blue.”

All of the meticulous detail work, all the searching for obscure and distinctive parts, and all the test panels were worth it in the end. Not only does Elmer Bischoff have a real dream car that’s fun to drive, it also brings home trophies and accolades like First In Class and Outstanding Paint at the Cincinnati Cavalcade of Customs, and First In Class and a People’s Choice Award at the Indianapolis World Of Wheels.

“On top of all that, Russ has become a great friend of our family, and I think the whole experience has inspired Stephen,” he said. “He’s been along for all the ups and downs, and now he has some project ideas of his own.”

His wife Ronda shoots him a stern glance.

“But I’ll just be consulting for him. I guess I have some other projects to finish in the house before I spend too much more time in the garage.” 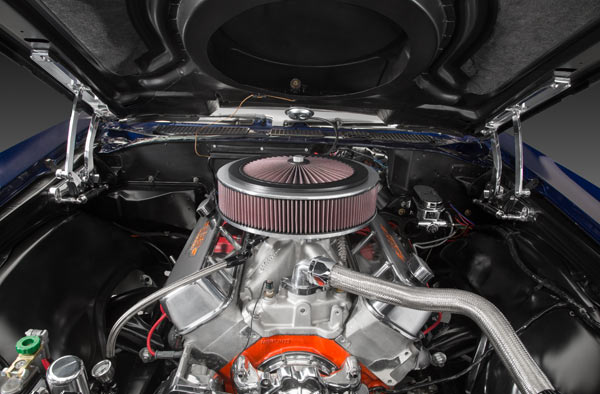 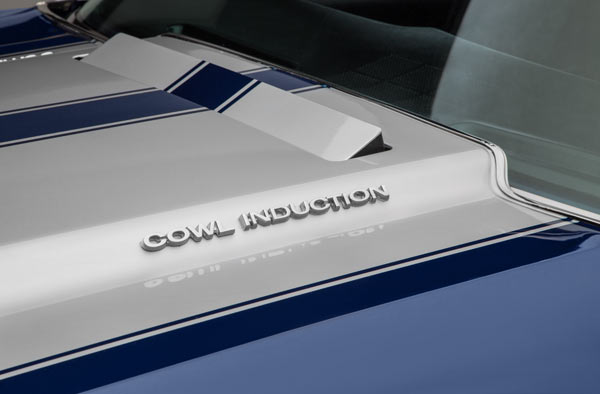 Where’s the ignition? The MSD coil and control box are hidden up under the wiper cowl. Elmer’s biggest trick was fitting this massive engine under the stock cowl hood. “It took a while to track down an air clearer that would snug up inside the stock recess, but we did it!”

It doesn’t really do that much anymore, but the stock cowl flap is still there, and it still works.

“Folks get confused when they see the clutch pedal in a car with an automatic ratchet shifter,” Elmer says. “I plan to switch from the GM TH-400 tranny to a manual transmission someday, and I just have the pedal there, ready to go.” The custom center console features GM Performance gauges and a B&M Pro-Ratchet Shifter.

Elmer always wanted a 5-speed transmission with overdrive, but he didn’t want to cut up the floor to make it fit. He finally tracked down one that fits without modifications, but he has a few projects that are ahead of that one. In the meantime, he’ll just have to get by with 806 horsepower @ 6,500 rpm, and only 734 ft.-lbs. of torque at 5,200 rpm. Poor Elmer.

Elmer and Ronda got more than just a sweet hot rod out of this project. They made a new family friend in Russ Coffey, and inspired the next generation of custom car builders in Elmer’s son Stephen. Aren’t we all glad Elmer didn’t settle for just a repainted old Chevelle?

How does your all-stock body look after more than 40 years? “This one had only had 51,000 miles on it when I got it,” says Elmer. “I was just going to repaint it the factory green, but then I got into it and found things that needed fixed, and before you know it, we had the body from the frame and we started sandblasting everything.”

Elmer and his crew made the Chevelle look showroom fresh. Every seam is perfect, and all the trim and badges are brilliant.

Elmer’s cousin Tony Bischoff at BES Racing Engines helped put together a fresh big block Chevy to kick all the resto out of this project. They started with an overbored Merlin block, and built it up with Dart Race heads, a Super Victor intake from Edelbrock, a Quick Fuel QFX-Series carburetor, Lemons custom headers, and more.

Russ Coffey, BES Racing Engines, and all our family and friends