Editor’s Note: Mike Mavrigian has been building and writing about engines almost as
long as there has been internal combustion. Mike’s shop, Birchwood Automotive, specializes in street performance and racing engines as well as vehicle restoration. As you’ll see in this article series, he includes a wealth of information on his engine builds.

In Part 1, we covered the 499 big block’s engine specs and block prep. In this episode, we’ll cover the rotating assembly, camshaft, oiling system, and other items to finish the short block. In Part 2, we showed you the short block assembly. In Part 3, Mike finished the build with cylinder heads, valvetrain, and external bolt-ons like the intake manifold, distributor, and water pump. Now, you’ll get to see what all those shiny parts are worth on the engine dyno. 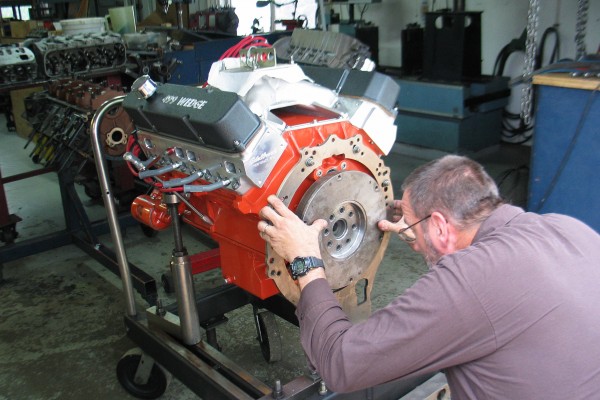 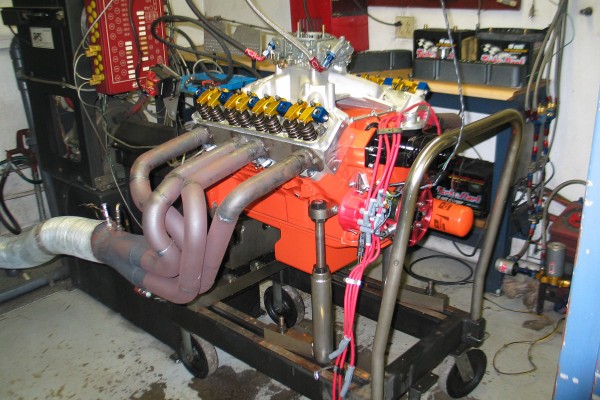 We brought our 499 cube big block Mopar to Scott Koffel’s for dyno testing. Here, the dyno drive plate is iinstalled to adapt the engine to the DTS dyno.

Koffel’s in-house long-tube headers were installed for the dyno runs.

Scott Koffel monitors the engine before making a pull. We didn’t have a single glitch during any of the dyno runs.

We decided to convert the induction system to fuel injection with a Holley Terminator EFI system. The system included everything needed for installation.

Installation and setup requires reading the instructions. Don’t try winging this! The instructions are lengthy but easy to follow. If you take the time to read, setup will be a breeze.

The Terminator EFI throttle body flows 950 cfm and has four integrated 65 lb./hr. fuel injectors. The throttle body was plumbed with -6 AN braided hose and fittings.

The Terminator system’s oxygen sensor was installed in the left side header collector.

The Terminator system’s ECU features a USB port (blue cap at left) that we did not use. Next to the USB is a J1A 34-pin connector for input signals. This receives inputs from all sensors. The J1B, 24-pin output connector is for injector and ignition signals. At the far right is the main power connector.

The controller’s main menu features selections including Gauges (a graphic view of various sensor readings), MONITOR (numeric views of sensor readings), WIZARD (creates base calibration and performs TPS setting), TUNING (for adjustment of various parameters), and FILE (allowing you to load and save numerous calibration settings). The amount of information available on the controller is amazing.

With timing still at 34 degrees, our final EFI pull netted 657 peak horsepower at 5,800 RPM and 642 ft.-lbs. peak torque at 4,900 rpm. That was 13 more horsepower than our best pull with the carbureted setup. Scott Koffel is certain that with a bit of head porting and additional timing, hitting 700 horsepower would be no problem. Not bad for a little street motor!

With the 499 fully test-fitted and assembled, it was time for the real-world dyno test. Since Koffels Place did our block machining and crank balancing work, it only made sense to take advantage of their engine dyno facility. Located in Huron, OH, Koffels specializes in all things Mopar.

Once we delivered the engine to Koffel’s, it was fitted with their dyno drive plate and wheeled into the dyno cell. The first order of business was to fill the engine with 30-weight oil and prime it to make absolutely sure oil was delivered to the bearings and and rocker arms prior to firing up the engine.

We made the first dyno run with one of Koffel’s Holley dyno carburetors to break in the cam and allow the rings to seat. Following the break-in run, the oil and oil filter were removed and inspected. Everything looked fine, so we poured in new oil and screwed on a new filter.

Scott Koffel made two dyno runs with his Holley carburetor to establish a baseline. The 900 cfm 4150 series carburetor has been massaged, tweaked, tuned, cuddled and kissed for years and is dead-nuts reliable. The first pull was made with 32 degrees total timing, and the engine made 638 horsepower at 5,500 rpm and 641 ft.-lbs. of torque at 4,800 rpm. Scott bumped timing to 34 degrees total for the second pull. Horsepower increased to 644 at 5,800 rpm, with torque staying virtually the same at 639 ft.-lbs.

These results were not bad at all for a fully-streetable motor.

While the dyno numbers put a smile on our faces, we wanted to see what Holley’s new Terminator EFI system would do. We discovered the Terminator during our planning period and obtained one to see if EFI could make more power than a well-sorted carburetor.

The Terminator system includes a throttle body with four built-in injectors, a wiring harness, controller, and a hand-held plug-in controller that allows custom tuning. We installed the Holley Terminator system using -6 AN plumbing from the throttle body to a high-pressure Aeromotive electric fuel pump capable of feeding up to 1,300 horsepower. We also installed an Aeromotive adjustable bypass-type fuel pressure regulator between the throttle body to fuel tank. It was set at 45 psi.
W

hile the instruction manual initially seemed a bit daunting, setting up and programming the system turned out to be quite easy. The Terminator system is designed self-learn—the controller continually adjusts the system’s fuel delivery based on driver habits. We didn’t have the time to wait for the system to self-learn (remember, dyno time is expensive), so Scott used the hand-held programming pad to essentially, in Scott’s words, “Give us all of the fuel that the system would allow.” Scott was so impressed by the Terminator that he plans to obtain one for his own long-term experimentation.

With the Terminator system in place, our 499 woke up and screamed. Keeping timing at 34 degrees, the engine made 657 horsepower at 5,800 rpm, and 642 ft.-lbs. of torque at 4,800 rpm. Getting an additional 13 horsepower is pretty darned impressive, considering that we invested a mere 20 minutes of dial-in/tuning time.

It’s important to consider that all of our runs were made with untouched Edelbrock Performer cylinder heads. Scott noted that while these heads did an outstanding job, he was firmly convinced that 700 horswpower would be no problem with a bit of his custom cylinder head porting and playing with timing and EFI tuning.

If you want to duplicate our build, Summit Racing made it easy with these Birchwood Automotive Mopar 499 parts combos.

We think you’ll be very happy with the power the first time you crack the throttle!

5 responses to “Mopar 499 Street Hero (Part 4): The Dyno Results and an EFI Surprise”