Ghosts of Christmas (Trees) Past: Reliving a Time when Racing and Hot Rods Ruled

Editor’s Note: Christmas often makes us feel nostalgic, so we asked one of our most-veteran contributors, Wayne Scraba, to tell us about some of his favorite experiences in hot rodding. In the post, he takes us for ride in the Wayback Machine to the days he owned a speed shop in Western Canada and shows us how cars were built in those days—and what parts went into those cars. He’ll be back at it next month with more tech stuff. 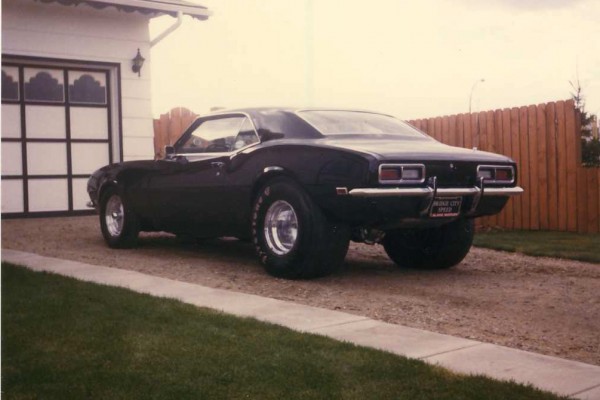 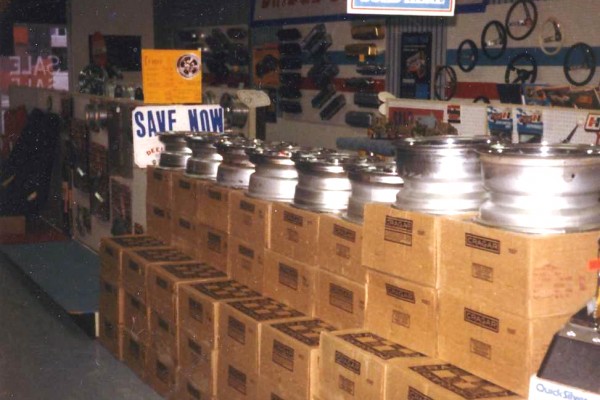 This was one of my personal rides in the mid-Seventies: a real 1968 Z/28 with a 468 cubic inch Rat motor. The big block was backed by a Powerglide and a Dana 60 rear axle. I used it as a street car, but it wasn’t really all that streetable. It was a pretty car, though.

This photo is from my first shop (I had two of them). We sold a lot of Cragar SS wheels—there was a bigger pile in the back. stacked to the ceiling. I see we were really promoting B&M’s new Star Shifter!

Here’s another snapshot view showing stacks of Edelbrock single plane intake manifolds and 7mm Mallory yellow ignition wire. In the cabinet are Auto Meter and Sun tachs along with a couple of mechanical tachs. There are some early MSD pieces on display, along with chrome mechanical fuel pumps (most likely from Holley), a pile of Hurst roll controls, and a bunch of ACCEL Super Coils and ignition parts.

This is a big block Chevy I built for a tube frame Monza I had. I can spot a set Crane roller rockers, a Ridgeway double bar stud girdle, and one of our own shop-modified Holley double pumpers on a ported Strip Dominator manifold. I also ran a first generation ACCEL BEI electronic distributor with a MSD cap adapter and a pretty cool fuel delivery system (note the dual pressure regulators up front). I ran a Powerglide with a trans-brake, too. This was pretty much the height of technology in 1980.

This is Gary Waldner’s Chevy II. It was a 283 4-bbl, Powerglide combination, exceptionally clean and fast. “Waldo” was an absolutely great racer who constantly tested and flogged hardware. He was always at the track doing “A-B-A” parts tests (baseline, swap in the new part, back to the baseline).

Here’s Paul Fisher’s 340, stick shift Dart. Paul was meticulous—the Dart was one of the cleanest racecars on the planet. He was one of the nicest, most humble guys you’d ever meet in the pits.

Ken Reich ran this C/SM Chevy II out of Edmonton, Alberta, Canada. The car was bad to the bone. Ken still campaigns a strong Super Modified Cobalt—he won Comp Eliminator at the NHRA Toyota Nationals in Las Vegas this past November, with Justin Lamb driving.

This is my good friend, the late Zenon Kotelko. “ZK” definitely knew his way around a drag strip—note the “1978 NHRA Record Holder” lettering across the trunk lid. The Chevelle held the SS/LA record more often than not.

Almost four decades ago, I turned the key to open my first speed shop. (It really was on a corner, too.) We were young and times were heady: there were no distractions like video games, the Internet, cell phones, or cable. Instead, there was a passion for racing, high performance, and “how on earth” fast cars. In my neighborhood, they ranged from tri-five Chevy’s to traditional muscle cars. Those cars were cheap and readily available; if you paid $1,000 or so for a super clean, low mileage ’55, you paid a lot. Gasoline was around 39 to 53 cents a gallon.

Racing fueled a lot of passion. There was an oval track crowd in our town, but their rules were so restrictive, there was little I could sell them. Drag racing, on the other hand, was alive and well. Sportsman drag racing was huge, with plenty of bracket racing for the little guys and a lot of class racing for the more serious folks. Door cars were the order of the day and many of these were vintage muscle cars. My shop sponsored two different Super Stock cars—a 283-powered Nova and a 327-powered Chevelle. The Chevelle went on to become a multi-time NHRA National Record holder in SS/LA. That was a massive accomplishment at the time.

Unless it was a fuel or alcohol car, altereds and dragsters were few and far between. One of the local speed shops ran a nicely crafted 427 Ford-powered altered. When NHRA started their Econo Altered class, a few more cars popped up. There were some real oddities at the strip too. One guy ran dual Wankel engines in his Mazda. The shriek from the open exhaust was impressive. Even more impressive was a “back east” 426 Race Hemi-powered International Harvester Scout that occasionally ventured west to our track. It was an absolute beast.

It wasn’t uncommon for customers to build a 12:1 and higher compression ratio engine for the street. A “big squeeze” combination was popular, and they sounded great at idle—they made such a nice “pop.” Those honking compression ratios meant customers mixed their own fuel. Sunoco “high test” was an Eastern thing and unavailable. Aside from race fuel, the best you could do was to add various octane booster concoctions. I sold Moroso octane booster as well as Octane 104+. Some guys were actually mixing 100-130 aviation gas with pump gas laced with a lot of Toluene. I even bought a gas hydrometer setup so I could test the specific gravity of mixed fuel. Experience showed us that the Toluene mix eats rubber fuel lines, kills fuel pump seals and tends to create more engine wear. Pure Toluene isn’t exactly good for you to inhale either.

The small block Chevy was still The King, with the big block Chevy not far behind. Then came Mopars with “everything else” bringing up the rear. Customers buying speed parts regularly studied car magazines and pretty much knew exactly what they wanted. Once, a speed equipment warehouse back east offered us a great buy if we bought 12 or more 454 LS7 big block factory crate motors (the GM part number was 3965774). I bought a bunch of them at once and stacked them up in the back room of the shop. Looking at that stack of crate motors (and the big money dollars they represented) kept me up nights. I did manage to sell them all and pacify my ulcer.

Competing shops tended to specialize in particular product lines. For example, my shop primarily sold and serviced Holley carburetors (double pumpers and 3310’s were the big movers), while one on the other side of town specialized in Carters. They sold Crane cams, but my shop sold Cam Dynamics and later General Kinetics, Competition Cams, and Ultradyne cams.

Sun and Stewart Warner tachs and gauges still ruled the roost. I added Auto Meter tachs and gauges to the mix, but it took a while for them to catch on. Headers and exhaust were big part of the business too—Hooker, Casler and Cyclone headers along with turbo mufflers and Thrush glasspacks. ACCEL accounted for almost all of our ignition component sales.

Tunnel rams were big with a lot of customers, but most guys quickly discovered that the drivability was lousy, particularly with a small displacement engine and/or an automatic. Holley offered 660 center squirter carbs, but it was easier to make a tunnel ram setup run with a pair of small 600 or 650 double pumpers. Edelbrock’s Tarantula and Torker intakes were the rage. When Holley released their Strip Dominator line, the bar was raised. We didn’t sell Weiand, simply because one of the other shops in town flogged it to death.

When it came to fuel delivery, if a car was running a pair of Holley “blue” pumps, it was serious. They were usually plumbed with separate pickups, into a “Y” and then inline with a big Fram fuel filter with the chrome case. Hearing the dual pumps growl and prime before the car fired up was music to our ears.

Transmissions were a 50-50 split between automatics and sticks. I even had a customer who ran a Clutch Flite on the street until it exploded. When it came to clutches, you sold pressure plates by poundage. It seemed like the bigger the internal springs, the better it had to be. Sometimes the pressure plates were so stiff, they’d bend clutch linkage and bow firewalls. Well-used cars often had firewalls cracked from the abuse. Lakewood scattershields were common, partly because the local drag strip wouldn’t allow a small block Chevy with solid lifters to run without a safety bellhousing.

Hurst stick shift shifters pretty much ruled, although we also sold Mr. Gasket V-Gate shifters. I had a Mr. Gasket shifter demo stand in the front of the store. I’m sure it amused more folks than it sold shifters. The automatic shifter of choice then was B&M’s 60 series. The little chrome “box” cover cost extra, but most guys opted for it. When B&M revealed their Star Shifter, which looked a lot like a V-Gate manual shifter, it caused a customer feeding frenzy. Down the road, Hurst automatic shifters took over.

Wheels and tires were a big part of my business. I sold Cragar, Keystone, Western, and Center Line wheels. The most popular had to be the Cragar SS. They were so popular I bought a truckload of them one year and sold them for a great price. The downside was we sold Cragar SSs to everyone who would ever want them. That pretty much saturated the market—forever. When it came to street tires, bigger was better. There was always a need to gain tire clearance. Since wheel tubs were expensive and difficult to do, many guys simply jacked up the back end of their cars and added air shocks to clear those L60’s and N50’s. Shackles, shock extensions, and spring spacers were other options for getting that back end up in the air.

I hope you enjoyed my little stroll down memory lane. Those days were truly a special time for car junkies like me. But I have to admit, with 1,000-horsepower cars running the streets and parts we never dreamed existed back in the day, right now is the best time to be a gearhead.

7 responses to “Ghosts of Christmas (Trees) Past: Reliving a Time when Racing and Hot Rods Ruled”