Operation Appreciation 2014: Catching up With Eddie Krawiec & Sight-Seeing in Africa 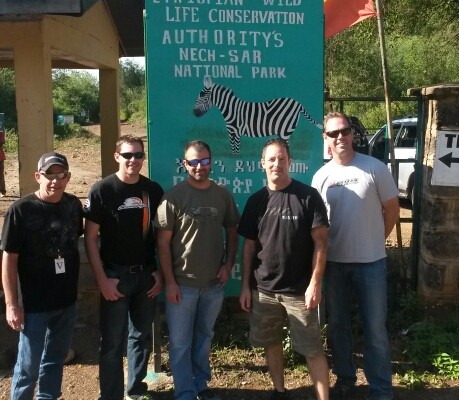 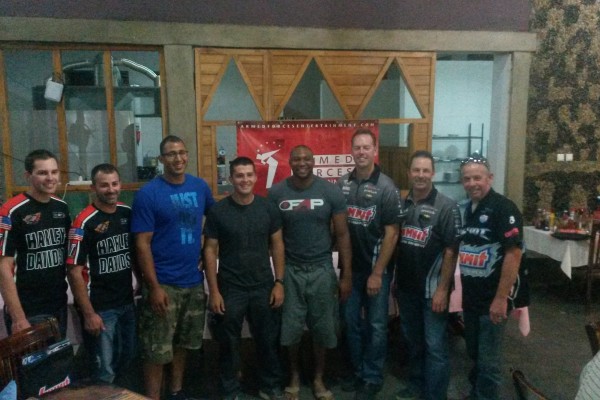 We’re back in Addis Ababa now and will be heading to Djibouti early tomorrow, but I wanted to go back to Arba Minch before we move on. This tour is all about the troops, but there is some time in the schedule that’s not completely allocated. That gives us a chance to catch some of the local sights, like when we hit the racetrack in Bahrain.

With the limited access to Arba Minch (one flight a day in and out), the schedule left some time for us to see a bit of the local area. Since none of us had ever been to Africa before–and I think I can speak for all of us, when I say we’re not going to have much chance to return in the near future–this was an opportunity not to be missed.

The lodge where we stayed was rustic to say the least. Don’t misunderstand–the rooms were nice, beds comfortable, water hot, etc. I’m strictly talking location here. For example, goats wandering around are the norm, and on the way to breakfast the first day, there was a Warthog grazing right next to the walkway. If you like wildlife, Africa is a great place to see it.

We were invited to accompany the security patrol one evening at the airport where a constant issue is keeping the Hippos off the runway–probably not much of an issue at LAX! The night we were there was a slow night–only two hippos and about a dozen deer to go with the hyena and warthogs. They also have rabbits big enough to chase most of the dogs right out of my neighborhood! It was explained that the hippos have the right of way, and the truck had the scars to show from one time when a driver challenged them. Lesson learned.

One morning, the offer was made to take a boat across Lake Chamo and then a hike up into the surrounding hills. The hike wasn’t a record setting distance, but the climb was pretty stout. And considering that we were at 8,000-ish feet of altitude, it was a nice workout. Once we reached the plateau, there were Zebras roaming in the wild as well as a couple of ancient burial mounds. It’s impossible to know if they have been there for a few years or a few hundred as there are tribes indigenous to the area that haven’t changed tradition for hundreds of years.

This morning we went into the heart of the jungle. The monkeys outnumbered us at least 50 to 1. Many pictures were taken and even some children were swimming in a pond that formed naturally. These kids didn’t speak any English, but they clearly were not intimidated by tourists or cameras. But they make it quite clear that if you took a picture you had to share it with them. Here were kids with no smart phones, video games, or toys of any kind, but I haven’t seen smiles that wide in quite some time. Kind of makes you think….

Today I cornered three-time NHRA Pro Stock Motorcycle Champion Eddie Krawiec for some of his thoughts on Operation Appreciation. When asked about what made this special he didn’t have to think long before answering:

“Just being able to come do this, because there’s not many people that have that opportunity. And I just wanted to be a part of it if I could.”

About this particular trip he said:

“This trip I have seen more about how the troops have to interact with the locals and deal with language barriers. It’s really been different, and I’ve realized that you have to almost become one of the locals just to accomplish the day to day things.”

He went on to add:

“It’s a life experience every time you do it. I’m never going to open a tour book and say: ‘Hey! I need to go to Djibouti or Ethiopia.’ When I go on vacation I have my wife and family to think about, but this is special because of the level that we do it. We go on to a base and get to see things that most people don’t. I love when a soldier says you can’t take pictures and you can’t talk about this, but let me show you what I’m working on. That’s the best.”

Eddie hails from New Jersey, and that gives him an instant connection when meeting people around the world. And as we have all learned, once a commonality has been found, the conversation rolls on from there.

One last Arba Minch note: At breakfast today while dining on the deck overlooking the valley, an uninvited visitor dropped by. Have you ever had a baboon run up to your table and steal a roll? They did! No kidding–and apparently it’s not the first time it’s happened! There is video of the theft, but I don’t believe charges will ever be brought. Memories however will last forever.

Well, tomorrow it’s up early and off to the airport (it feels like ground hog day) for a short flight to Djibouti. We will also catch up with the now four-time champion Andrew Hines.

2 responses to “Operation Appreciation 2014: Catching up With Eddie Krawiec & Sight-Seeing in Africa”