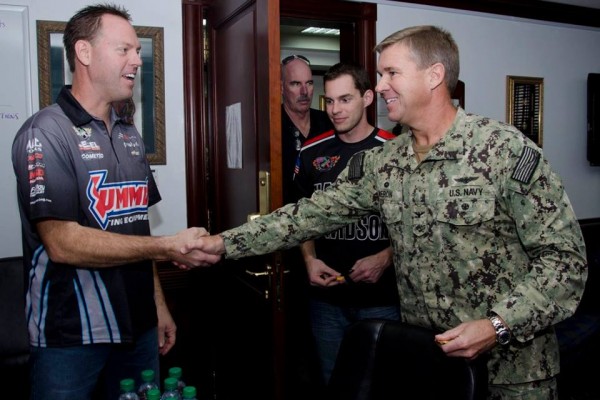 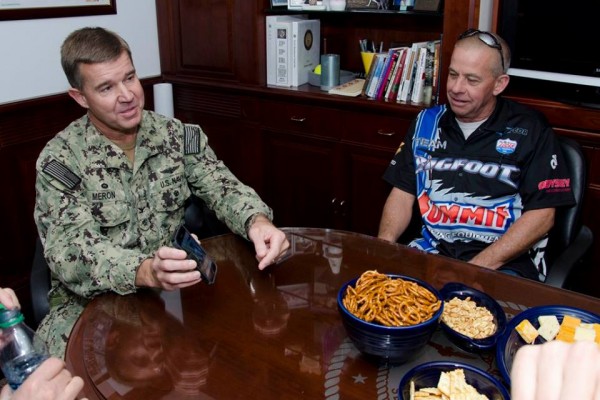 Dan Runte listens to Captain David Meron at the Naval Support Activity base in Bahrain.

Summit Racing's Jim Greenleaf stands in front of the 400-year-old Tree of Life.

More sights from around Bahrain.

The first couple of days have been a whirlwind.

I can’t think of any other way to describe it. I had no trouble drifting off last night, after a quick bite at the hotel it was time for some rest.

I can’t believe how quickly two days just flew by. It started with a visit to the Naval Support Activity base in Bahrain. The guys had a chance to do a couple of segments on Armed Forces Radio getting the word out that we had arrived, and sharing the schedule of events and appearances. Each spoke from the heart about what the men and women that make up the military mean to all of us back home, and how much we appreciated their commitment and dedication.

Then it was off to meet the base commander who is a big follower of the NHRA and wanted to hear from Jason all about the last race of the year, which if you don’t know, went down to the final round of racing with the point championship still up for grabs.

From there it was time for the first formal meet and greet. Once we finished, it was on the road to two remote installations and more chances to meet the soldiers and see what they do to insure our safety back home.

The schedule is crazy, from base to base and event to event, but not one word of complaint is heard. Both days, it was well past dark before we returned to the hotel. These guys all know what they signed up for and wouldn’t have it any other way.

“I drive BIGFOOT!” That statement tells the story. Other than the Batmobile, I can’t think of any other machine that is so universally known and loved. And that has been Dan Runte’s job for the past 25 years. With a travel schedule of over 40 weekends and a guy who doesn’t fly in but actually drives the hauler as well as the monster truck you would think he would be looking for any excuse to spend his off time at home. But Dan is now a five year veteran of Operation Appreciation and he wouldn’t think of missing this tour. But as he put it:

“It’s something that I can’t not do, these guys do so much for us. This time that we spend out here is incredible and that we get to spend it with the guys and gals in our military service is special. You know, I’ve been to places that are just heart wrenching, and what they give up and what they go through, I’m just amazed by it, and I’m just so thankful for it.”

When asked about a highlight from the first two days, he couldn’t single out just one:

“It just kind of all runs together, when I get home and look at my notes, because I do that—I take notes and stuff. And when I look back I’ll probably pick a highlight, but at this point I don’t really have just one. It’s all been special.”

Even with all this on the plate we did manage to visit the 400-year-old Tree of Life that the guys missed out on last year, and made a quick stop at the race shop of Ebrahim Kanoo which is as nice as any race shop I’ve ever seen. We also snuck in a side trip to Bahrain International Circuit (part of the NHRA Worldwide program). If I had to describe it in one word it would be: WOW!!! As luck would have it, Chief Executive Salman bin Isa Al Khalifa was there and he and his staff made sure we got a tour to remember. The facility is simply amazing.

Well, I’ve got to run, because we’ve got to catch the midnight flight not to Georgia, but to Arba Minch.

Next stop Africa. Check back soon.