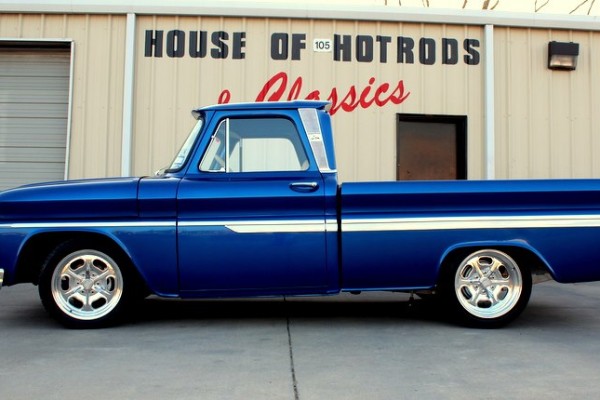 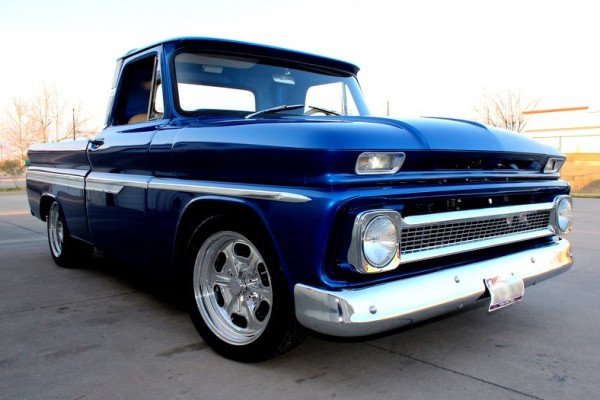 Wylie Clough began work on rebuilding this Chevrolet C-10 while serving in Afghanistan. He spent downtime securing parts for the project over the Internet.

The truck is lowered 3 inches in front and 3 inches at the rear, using Classic Performance suspension components. The interior and paint was done by House of Hotrods.

Wylie Clough's truck scored an Ultimate Truck Award at the 2013 Dallas AutoRama. Clough was able to track down the Custom Cab trim for the truck with help from his uncle who supplied measurements from the cab of his 1966 model.

Other engine features include Speed Pro hypererutectic pistons, nodular crankshaft, and forged steel connecting rods. A Be Cool aluminum radiator and March Performance pulley system are visible at the front.

Inside, the truck has two-tone leather upholstery and still houses the original gauges with updated glass.

Clough rows the gears on a Hurst 4-speed shifter while listening to his JL Audio stereor system.

Like most gearheads, he has gasoline in his veins too. And it was that passion for classic Amercian automobiles that helped fuel the U.S. Army Battalion Executive Officer during his darkest, most stressful times while protecting our freedoms in Afghanistan. A combat advisor on the highly volatile Afghanistan/Pakistan border in early 2008, Clough was responsible for training an Afghan Infantry Battalion and often found himself in some of the ugliest situations imaginable.

Ironically, that’s where his vision for this beautiful 1964 Chevrolet C-10 pickup was born.

“Some deployments are safer or more dangerous than others,” said Clough of his time in Afghanistan. “You evaluate your situation and you think to yourself, ‘This may be it.’ Then you start thinking about what you’d like to do if you make it out.  Do I have any regrets? What would I do differently if I had another chance?”

Clough determined it was time to give his trusty C-10 new life.

The old Chevy truck had been in his family since Clough was 5 years old. It was used primarily for hauling wood, moving furniture, and other assorted errands. Clough learned how to drive in the truck, and his dad gave him the pickup when he was 15. In 2003, he decided to park it for good due to his commitment to the Army, but he still had a soft-spot in his heart for the old family hauler.

“In the spring of 2008, while serving in Afghanistan, I mentioned to my step dad that I wanted to get it back on the road,” Clough said. “He said, ‘Why don’t we rebuild it?’ So that summer he pulled it out of the car port where it had been sitting and moved it into his garage.”

During his downtime in Afghanistan, Clough scoured the Internet for parts so he could begin the build as soon as he returned home. He ordered parts from SummitRacing.com and other online parts sources and had them shipped to his hometown in Texas.

“They had Internet access, so I did a lot of shopping for parts in Afghanistan,” Clough said. “It gave me something else to think about while I was there, but I got carried away and ordered so much that I had doubles and triples of some things! I couldn’t remember everything I had ordered, so I had to inventory everything when I got back. I had to return or eBay a lot of things.”

Clough returned home from his deployment and began disassembling the truck in early 2009. He removed the engine and transmission, stripped out the interior, took out all the old glass, and sent the truck off to the body shop–just in time to get redeployed to Afghanistan for a second tour of duty.

Following another year in Afghanistan, Clough returned home in 2011 and began the process of reassembling the truck. The truck’s frame was powdercoated, and the body was sprayed in a Dodge Royal Blue basecoat with pearl and metallic flake. Clough tracked down all the Custom Cab trim to finish off the body, and his uncle, Dickie Clough, installed a new Bed Wood truck bed.

The truck is powered by a 350-cubic-inch small block Chevy, which features first-generation Vortec cylinder heads and a variety of aftermarket go-fast parts. The engine sends 354 horsepower and 404 foot-pounds of torque to the rear wheels via a four-speed Muncie transmission. Clough rips through the gears using a Hurst 4-speed shifter. Other interior features include two-tone leather upholstery, original 1964 C-10 gauges, and a JL Audio stereo system.

From start to finish, the project took about four years, but it didn’t take nearly as long for the C-10 to get noticed. The truck was a hit at the Goodguys Lone Star Nationals in Ft. Worth, TX this past spring and even earned the Ultimate Truck Award at the 2013 Dallas AutoRama.

A well deserved honor for Clough and the truck that inspired him.

6 responses to “Hero’s Hauler: A Story of Courage, Commitment–and Customization”