Report: 2 Aliens Dead, 1 on Loose After UFO Crash in Norwalk 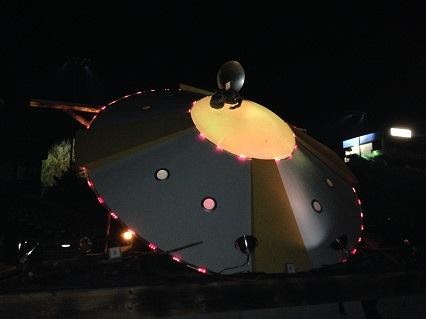 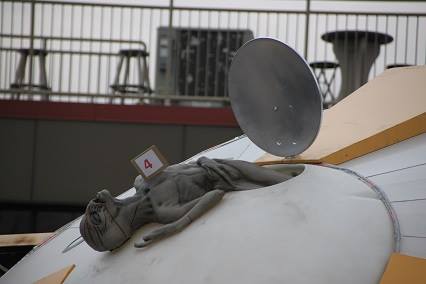 Are you ever too old to engage in some good, old-fashioned Halloween shenanigans?

At exactly 7 am Wednesday, a large explosion rocked the small town in northern Ohio, causing concern among local residents and jolting hundreds of racers and race fans camped out at the track.

The cause of the explosion?

A UFO crash near the race track’s starting line.

And by “UFO crash,” what we really mean is another in a long line of fun promotional stunts executed by the Bader family, who owns the racetrack.

Two aliens are dead! And one’s on the loose!

Emergency sirens could be heard by those at the track’s campgrounds following the explosion, but after the siren sounds repeated every 60 seconds as if on a recorded loop, and no emergency vehicles arrived,  people on site quickly realized it was all part of the Halloween fun.

Some local residents who weren’t in on the joke were startled by the noise and called 9-1-1.

But most people seemed to take the prank in stride, including at least one Norwalk resident who wrote on the Summit Motorsports Park’s Facebook page that they told their two children about a UFO crash at the track and that at least one alien was reported to be on the loose, causing the scared kids to lock the doors and fear an imminent alien attack.

The Bader family did such a convincing job with their photos and video (which you can watch here), that it prompted more than one person to question whether there really had been an alien crash landing in Norwalk.

Men in Black’s Will Smith was unavailable for comment, but we were able to ask Tommy Lee Jones for his reaction to the people who didn’t realize it was a joke.

We appreciate the lengths SMP officials go to in an effort to entertain their customers, and wanted to share the fun with the rest of you.

One response to “Report: 2 Aliens Dead, 1 on Loose After UFO Crash in Norwalk”