Roland “Frenchie” Dorval didn’t plan for his 1925 touring sedan Model T to turn out the way it did. He just followed where the build took him.

Heck, he didn’t even plan his stop at Summit Racing. He left his home in Orneville, ME on September 8—camper in tow behind the Ford—and stopped by two days later on his way to Lebanon, TN for the 2014 Rat Rod Tour Build-Off.

That’s just the way Frenchie does it.

“That’s the way I’ve done it all my life,” he said, lighting a cigarette under the flag pole in front of Summit Racing’s Tallmadge, OH location. “I’ve been flyin’ by the seat of my pants. Every time I plan something it turns to s—.”

Sue, his trip companion, doesn’t disagree. “He doesn’t give me much time to pack.”

It’s no wonder Frenchie is drawn to rat rods.

“That’s what I like about rat rods,” Frenchie said. “You throw your own thing in it. There’s no rules. But you don’t want to make it too gaudy.

“Rat rods get a bad rap, you know? Some guys just don’t give a s— whether it’s safe or not. I don’t go along with that. It may be a rat rod but it’s safe as hell.”

Frenchie started work on “Ms. Leona,” the ’25 Ford he named after his mother, who passed away during the build, after he was invited to the Syracuse Nationals Backyard Build Off. He got the body for the car from a friend and did the rest of the work from there.

It’s powered by a Chevy 350 with Vortec heads and a COMP Cams camshaft. The front end is from a ’47 Chevy, while the rear end is an 8.8 from a Ford Explorer. The rear spring is from a Model T.

And those are the easy parts.

It took three separate pieces to build the roof. The back pieces came from a 1940 International Pickup. The middle side pieces are from a ’46 Ford Coupe. Frenchie used a third, straight piece of metal in the middle to weld them all together.

Frenchie likes motorcycles, so he fabricated the fenders to reflect those of an Indian bike. He also went to extraordinary measures to get a few details just right.

Sue said he climbed fifty feet up a tree to cut down the spiral wood limbs he used to make the end of the dipstick and snake coiled around the steering tie rod bar.

As for the side window accents, he took a specific approach to harvest blonde alder wood with dark notes.

“The last full moon in May,” Frenchie said. “After that, the wood peels and would be all [blonde].”

From there, he finished the Rat Rod’s accents with pieces and parts from friends and relatives.

The Eagle hood ornament belonged to Sue’s father. She doesn’t recall where it came from, but says it has been in the family more than 200 years.

The back bumper is an old bed post Frenchie found in the woods some 40 years ago.

The skull on the front bumper belonged to Sue’s son when he was a child. The swords came from a friend, and Frenchie made his own modifications to them (even dulling one down after he accidentally sliced his arm on it recently while working on the engine). The cap on the air filter was built out of a World War I civil defense helmet.

Frenchie said it drives like a charm and has not needed any mechanical adjustments since it hit the road.

“We drove all the way from Maine [to Syracuse] and not a bit of a problem. It handles like a dream, but without the trailer it’s a b—- to turn because the rear end locks.” 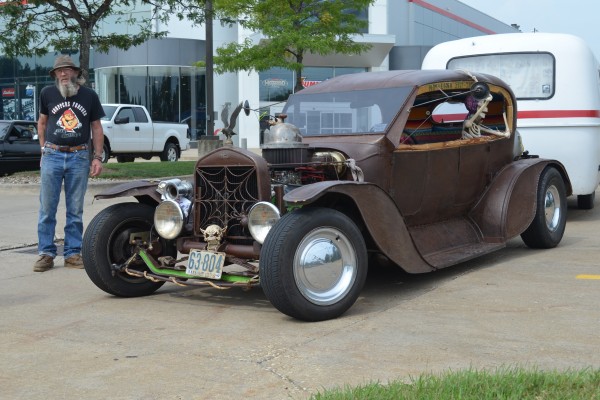 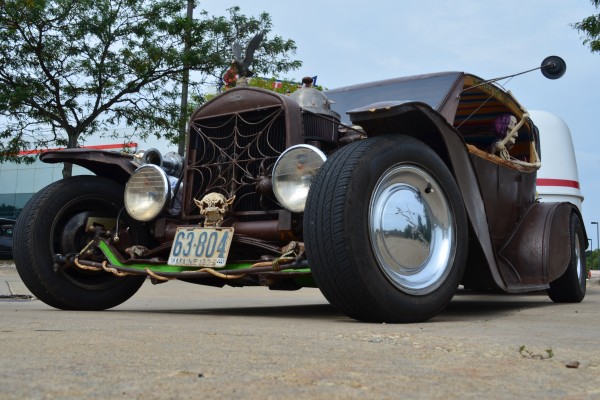