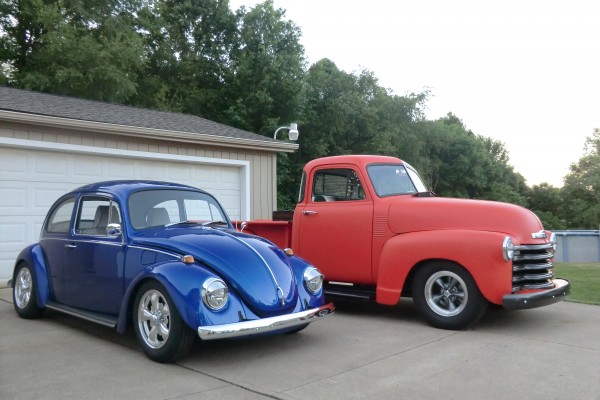 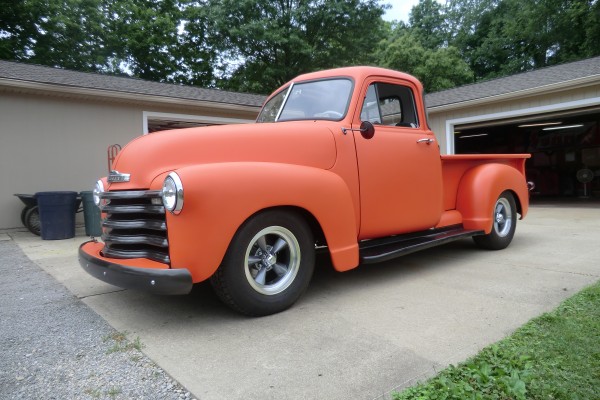 Inside, Bill Brautigam used Mexican blankets bought on a trip to Arizona to create the interior upholstery.

A lifelong car enthusiast and all-around gearhead, Brautigam has opted to celebrate his two daughters’ high school graduations by doing what he does best: restoring and/or rebuilding classic rides. For his oldest daughter, Nicole (class of 2011), he rebuilt a 1970 Volkswagen Beetle; for his second daughter, Samantha (class of 2014), he did a frame-off restoration of a 1953 Chevrolet pickup. The two vehicles were perfect surprise graduation gifts for the Brautigam girls, who were raised around hot rods and grew to appreciate dad’s passion for hot rodding.

“They’ve grown up around cars,” Bill said. “When my oldest daughter was still in her stroller, I took her to her first car show because my wife wasn’t around that day. When the girls were young, they’d argue about who get to ride in my Henry J. It only has the two seats, so one would ride to the car show with me and the other would ride back home with me.”

Although Bill got the girls interested in cars, the idea to surprise them with the Beetle and pickup originated with his wife, Carrie.

“Our first daughter had a passion for Beetles,” Carrie said. “On one of our roadtrips, we took our laptop and found one on Craigslist up in Michigan. We bought it and Bill went back up later and picked it up. Originally, we planned to buy it for graduation and then work on it together.”

The Brautigams decided to perform a basic cosmetic makeover on the Beetle and then surprise Nicole with her new ride at her graduation party. “We did a scavenger hunt for the Beetle,” Bill said. “We led her to the car trailer, and her clue was something like, ‘open the big box.’ She opened the trailer, and there it was.”

“When they opened up the trailer door, I really didn’t have a clue what to think–other than my dream car that I always wanted was sitting there in front of me,” Nicole said. “After seeing the car, my first reaction was to go and give my dad a big hug because I knew that was the start of something that my dad and I both love.”

After the big reveal, the fun really started. Bill stripped the Bug down to the bare metal and did a full rebuild. He smoothed the dash, removed the louvers from the hood and smoothed it out, lowered the car at the front and rear. The 1600 cc engine was fully detailed, and the wiring was hidden to give the engine compartment a cleaner look. Bill also installed 1967 Beetle taillights and front turn signals, replaced the entire interior, and moved all the switches to the dashboard. The car was then sprayed in Electric Blue Metallic Pearl by Bud Wentz at Wentz Hot Rod and Restoration.

Nicole Brautigam’s 1970 Volkwagen Beetle has since won a couple of awards at car shows, according to Carrie. And it set the stage for Samantha Brautigam’s graduation present three years later.

“Our younger daughter loves old pickups,” Carrie said. “A friend’s dad had passed away and we found a ’53 Chevy just buried in his garage. It was covered in so much dirt and dust!”

The Brautigam’s purchased the old pickup, but before restoring it, Bill first had to fabricate a story to keep the project secret from his daughter, Samantha.

“I called her from the Goodguys show and told her a friend had bought a truck, and I was going to build it up for him,” Bill said. “I had worked on a ’48 for a friend, Gary, and he ended up selling it. So I told her that Gary wanted to build another truck.”

To meet the June 2014 graduation deadline, Bill enlisted the help of an unlikely source–Samantha. “She’s been helping to urethane the roof and strip down the bed, so she’s been working on her own truck and doesn’t know it,” said Carrie just prior to the truck’s completion.

The pickup was stripped all the way down to the bare frame. Bill rebuilt the truck’s floor by hand, installed a Buick 10-bolt rear-end, and added a Mustang front suspension and drop spindles. To get the old truck moving, he pulled a Chevy 400 engine and Turbo 400 transmission from an old motorhome. Using 1 x 6 wood from his local Lowes, Bill refinished the truck bed and added an Old Antique trunk to the bed to hold the fuel cell. Samantha’s shop truck sits on US Mag wheels and wears Summit Racing Flat Orange Paint–one of Samantha’s favorite colors.

“All along, as we were working on the truck, I’d ask (Samantha) what do you think about this idea or that idea,” Bill said. “I think she may have been suspicious at one point, so I even had my friend send a fake check and parts list to the house so she’d really think the truck was for him.”

“It was a shock at first but I was ecstatic that I finally had the truck that I had been wanting for so long,” Samantha Brautigam said. “It is amazing to me to think (my dad) has the talent and skill to produce such pieces of what I consider art.”