Rutledge Wood Plymouth Wagon Update: In His Own Words 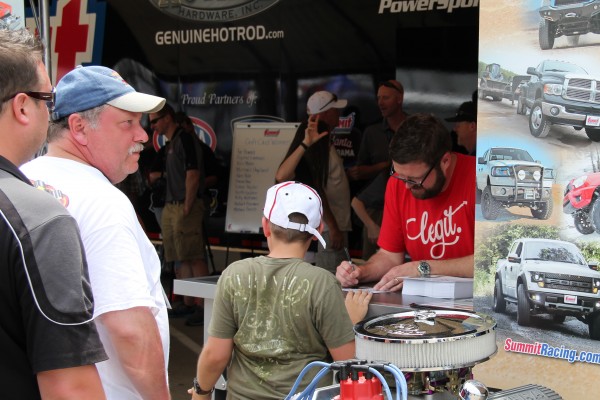 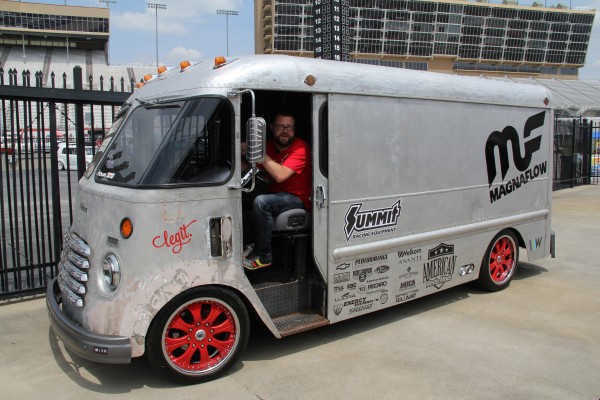 Rutledge Wood doing one of his favorite things—meeting people and signing autographs. He signed autographs at the Summit Racing display rig at the Atlanta Motorama for over an hour.

Rutledge brought his 1949 Chevy Step van to the Motorama. He was amazed how many people loved the aluminum breadbox on wheels. “I heard tons of stories from people who told me they had always wanted to fix up an old step van, or how they grew up riding around in their family’s van and all the fun times they had in there!” Rutledge told us.

While Rutledge was having fun at the Atlanta Motorama, Randy Allgood and the crew at Kenwood Rod Shop were busy assembling the chassis for Rutledge’s ’53 Plymouth Suburban wagon. Here is the bare frame fresh from the powdercoaters.

Moments later, the front and rear suspensions are in place. Here you can get a good look at the Heidt’s Mustang II-based front end kit. It comes complete with a power rack and pinion steering system and 11 inch disc brakes. Note the custom transmission crossmember fabbed by Kenwood Rod Shop.

The BluePrint Engines 408 fuelie Chrysler/American Powertrain T-56 drivetrain combo is lowered into the chassis. It’s staying for good this time.

The front accessory drive is a March Performance Serpentine Conversion Kit for small block Mopars. It comes with a 105 amp alternator, a GM Saginaw style power steering pump, mechanical water pump, and A/C compressor, all nicely polished to match the billet aluminum brackets and six-groove pulleys. It’s almost a shame to hide it under the hood.

The aluminum driveshaft was custom-built by Mark at Drive Line Service of Atlanta. It measures 3.5 inches in diameter; a steel driveshaft would probably be smaller in diameter, but would weigh more.

It’s almost a car! The rolling chassis is largely complete, minus plumbing and wiring. The wheels will come off later to be painted the same color as the body.

Also on Kenwood Rod Shop’s to-do list is the dashboard. Some of the factory holes have been filled (note the body filler); the large holes are for the A/C vents. The factory gauge cluster is currently getting an update and rehab courtesy of Classic Instruments.

Brian’s Paint and Body in Fayetteville, GA was equally busy working on the Plymouth’s body. After a session with the soda blaster, Brian himself got to work washing down the body to remove as much soda residue as possible. This is an important step as any soda residue will eventually work its way through the paint and ruin your day.

Another time-sucking job is smoothing out body panels. While the Plymouth’s body was very solid, the crew at Brian’s had to make patch panels for the front floor and smooth out 60 years of bumps and bruises. Here, Chris is working on the drip rail—a very common spot for damage and rust-outs.

The doors needed work too. The tan colored stuff is a skim coat of body filler. Most of this filler will disappear as the door is sanded. All you want the filler to do is smooth out any small imperfections, not cover up dents or holes. That’s what metalworking is for.

The Plymouth’s body shell in the paint booth. The gray part is a coat of filler primer; the tan stuff is spray-on bedliner material to insulate the interior from exhaust heat and road noise.

We debated about showing you this photo of the Plymouth in its new coat of Rutledge Wood Green, but since Rutledge has already posted it on his Twitter page, we figured why not? If you look closely, you can see the finished chassis waiting to be reunited with its shell. We’ll be covering that and much more in the next exciting update.

Editors Note: We have a guest blog this month from Rutledge Wood himself. Not only does he talk about the latest developments on his ’53 Plymouth Suburban wagon, he’ll give you his take on the first-ever Summit Racing Equipment Atlanta Motorama, held this past April at Atlanta Motor Speedway. Rutledge brought his nutso 1949 Chevy Step Van to the event, and spent time signing autographs and talking shop with his fans.

When you’re done reading Rutledge’s tale, make sure to take a look at our coverage of the Summit Racing Equipment Atlanta Motorama.

It’s 4 am on Sunday, April 27, and the alarm clock in my hotel is blaring. The last image in my head was two guys having a shoving match immediately following the finish of the NASCAR race in Richmond the day before, but now I’m up and ready. Today is the day I will be reunited with my ’49 Chevy Step Van at the Summit Racing Equipment Atlanta Motorama at Atlanta Motor Speedway.

A quick flight home to Atlanta, a change of clothes, load my daughters into my Tundra, and we were off!

AMS is my favorite track on the NASCAR schedule for lots of reasons. Ed Clark and his crew are like family and they always put fans first in whatever they do. Plus, when NASCAR is in town and I head over for my day job as a reporter on Raceday on Fox Sports 1, I get to see tons of old friends—and for at least one race weekend a year I can sleep in my own bed!

I hadn’t seen the Chevy since the SEMA show, and I was really looking forward to seeing it again. After debuting at the 2013 SEMA Show, the van spent some time at Magnaflow getting the exhaust redone so that it now exits both sides of the truck. At my three and five year old daughters’ request, we also made the exhaust a little quieter; we’ve taken the van from sounding like a NASCAR Sprint Cup Car (which is awesome if you’ve heard one before) to the hot rod sheep in wolf’s clothing that it is.

After the West Coast trip, we sent the van back up to the guys who built it, our friends at American Resto Mods in Buford, GA. Like any good project vehicle, the more you drive it and learn about it, the more things you want to improve. American Resto Mods installed a beautiful single piece aluminum driveshaft from Inland Empire Driveline that works much smoother than the two-piece setup from the ’99 Chevy 2500 chassis we used as the van’s foundation.  We also tweaked a few other things to get the van ready for the 2014 Hot Rod Magazine Power Tour.

When I got to the Atlanta Motor Speedway and saw the van parked by Summit Racing’s show rig like a proud puppy waiting for you when you come home from work, it was like seeing it for the first time all over again. To be honest, I was so excited to see how many people loved it. I realize it’s not everyone’s dream to build a hot rod bread truck/family hauler, but it was mine. I’m still so honored that Summit Racing saw that same vision and helped make that dream a reality.

To me, what made things come full circle was that step van being back at Atlanta Motor Speedway. The former owner told me how many times he and his friends would drive the van to the track and climb up on the roof to sit and watch the race.  Now, 31 years since it was last on the road, the Chevy was back at the same amazing place with a new lease on life. I felt like the van was really happy to be there. If you’re the type of person who thinks that cars have, for lack of a better term, a soul, then you would agree that the step van’s soul had a big smile that day.

I had some really cool pictures of the step van to sign and hand out to fans, and I couldn’t believe how many of them told me they had followed the updates and blogs here at OnAllCylinders. I heard tons of stories from people who told me they had always wanted to fix up an old step van, or how they grew up riding around in their family’s van and all the fun times they had in there. To see so many families look inside and see the back seat I put in so our daughters could ride with us was really cool.

And then everyone started asking me for updates on the new project, my ’53 Plymouth Suburban wagon that I’m building with Summit Racing to take on the Power Tour this year. The great thing about having so many friends that are helping build the Plymouth means they’re all going above and beyond to make sure it’s everything we hope it will be. Even Randy Allgood from Kenwood Rod Shop, the car’s builder, took time out to come to the Motorama and show me a bunch of pictures since I had been out of town for a few weeks.

I can tell you that the frame is back from powdercoating, and as you can see from the pictures above, it came out beautifully!  The Blueprint Engines 408 Mopar engine has been lowered into place (hopefully for the last time) and now, it’s just getting all the small stuff done while the body is still off.

Speaking of the body, Brian and the crew over at Brian’s Paint and Body in Sharpsburg, GA have been working their tails off on the Plymouth to get it all done and ready.  We thought from the outside and all of our inspection the body would be as rust-free underneath as it was outside, but once we removed the seats we found a little rot in the front floor panels, so we have cut those out and replaced them.  We’re trying to keep the body as close to stock as we can from the outside with just a couple of small tweaks like a hidden gas door and a third brake light.

I’m so excited to see the body in paint, which is probably happening as I type this. Once painted, the body will come back to Kenwood Rod Shop for assembly before it heads over to Gary’s Interiors for a beautiful new interior and a Kicker sound system. Then it’s back to Kenwood for final assembly and a shakedown cruise before we head out for the Power Tour.

The nicest thing for us is any time we’ve hit a stumbling block, we just pick up the phone and call Summit Racing. The knowledge the team there has is second to none. They have helped us come up with a solution for every problem we’ve had. Car people helping car people: what could be better?

Since we’re busy shooting new shows of Top Gear on History that will air this summer, I get to see the Plymouth mostly through pictures sent to me while I’ve been out working. The rare times I’m home I am constantly popping over to the shop to see what’s going on. So now I ask you guys and gals:  would you wait to see your car until it was all together and ready to roll, or would you sneak over and check it out every time you get a free 5 minutes?  What am I talking about—I know the answer to that!

And I’m with you—I love seeing a project as it’s coming together!