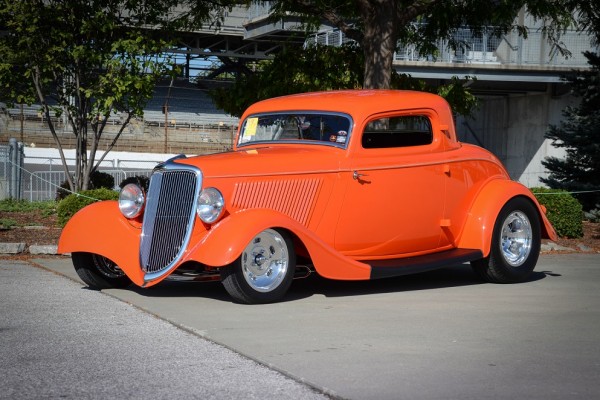 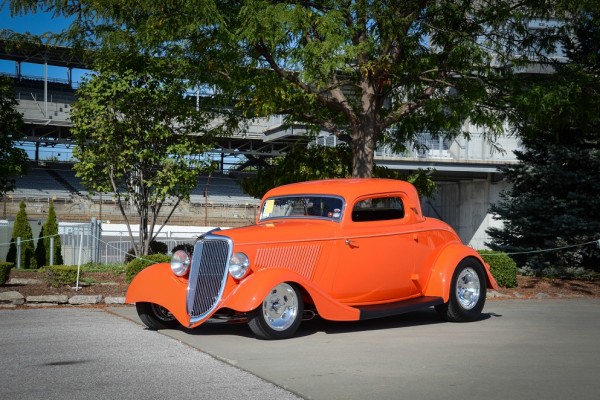 It’s been quite a summer for Memphis-based hot rodder George Poteet.

For the second time this season, a car from his stable has grabbed a signature award from the Goodguys Rod & Custom Association. George’s “Hugger Orange” 1934 Ford, built by the talented Dave Lane of Fastlane Rod Shop, captured the Goodguys 2013 Tank’s Hot Rod of the Year award at last weekend’s 3rd Speedway Nationals held on the hallowed grounds of Indianapolis Motor Speedway. Earlier this summer, Poteet’s 1969 Torino drove off with the Goodguys 2013 Optima Batteries Street Machine of the Year award in Columbus, OH. Sandwiched between the two big wins was a trip to race at the Bonneville Salt Flats in August, where he raced to the fastest speed in the SCTA record books–an eye-popping 437.183 miles-per-hour behind the wheel of the Poteet & Main streamliner.

Unlike any other Goodguys award, the Tank’s Hot Rod of the Year competition is demanding. The car’s agility, road worthiness, and performance is factored in, as well as looks and build quality. All contestants must take a 100-mile drive around Indianapolis and then blast down a dragstrip (Muncie Dragway in this instance) doing a smoky burnout and racing to the 1/8th-mile as fast as possible. Poteet’s 60s-style hot rod did both with aplomb.

The ’34 project started with a body from Steve’s Auto Restoration in Oregon that was already chopped with reclined windshield posts and a filled insert. Once Lane got his hands on the car, hours were spent moving things around to fine-tune the subtle proportions like the front fender beads, the pie-cut hood, the relocted upper door hinge, custom filler panels, hidden fasteners, and more.

The car’s underpinnings are just as impressive as the smooth flowing body. The handmade chassis features a Winter’s Quickchange on a ladder bar and transverse leaf system in the rear. For the perfect hot rod rake, Lane went with a 4-inch dropped front axle with JRI shocks and modified So-Cal brakes up front. Real Rodder’s wheels, 15-inch kidney beans and 16-inch big windows, lock down the 1960s hot rod vibe.

Under the hood it’s all hot rod! A mint 1965 Buick Nailhead was ground smooth and built by Russell Martin with Ross pistons, Hilborn injection, and custom headers. Backing it is a Richmond transmission with a Hurst shifter.

The interior is also 1960s competition-styled with an NOS Covico steering wheel and a collection of rare Greenline gauges. The dash was modified for the gauges and a pair of 1965 Impala seats were narrowed. Dave and Sally Schober handled the black leatherwork. There’s also a roll bar, one-off pedal pads, and a 1964 Galaxie armrest.

For the big win in Indy, Poteet will receive a custom toolbox from Snap-on as well as travel accommodations to the Goodguys 16th Southwest Nationals November 15-17 in Scottsdale, AZ to join the “Champion’s Arena” display featuring Goodguys’ Top 12 Cars of the Year.