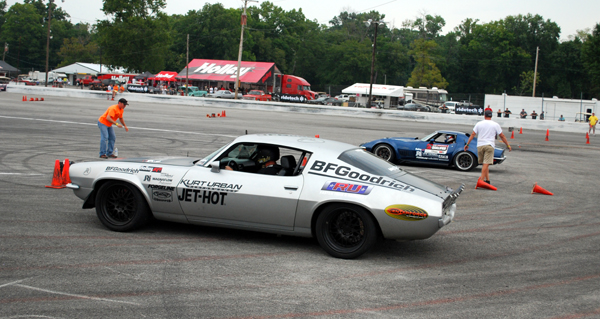 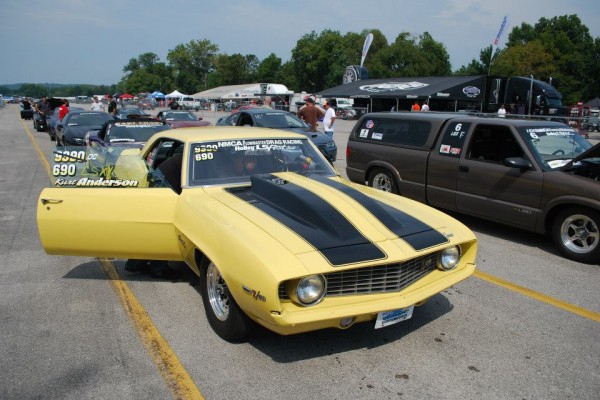 The 2013 Holley LS Fest proved again to be anything than your average car show! This year’s event was held Sept. 6-8 at Holley‘s home town track, the historic and beautiful Beech Bend Raceway Park in Bowling Green, KY. Anybody and anything sporting a LS equipped V8 engine got the opportunity to test their power, speed, agility and even their wrenching skills in a venue that attracted thousands craving for lots of tire burning, high-horsepower action. With seven different drag racing classes, an autocross, 3S challenge, and other events to participate in, there was certainly no shortage of action.  LS Fest Participants who compete in more than one event are able to earn points to be crowned the Grand Champion. This year, veteran autocross racer Danny Popp, earned a total of 71 points to take home the honor. Popp and his 1972 Corvette won first place in the 3S Challenge and Autocross, both of which propelled him to the top of the points standing. But Popp also earned extra points by participating in the LS Fest Cruise, show & shine and some drag racing events that sealed his title.

“We wanted to have an engine swap challenge that represented doing just that; an actual engine swap,” said Blane Burnett, Marketing and PR Coordinator at Holley. “Both teams did outstanding and the fact that Holley provided the vehicles and engines made it more difficult for the teams to prepare.”

The team of Adam Leigh and Peter Eskew, both from Missouri, completed the engine swap in the fastest time; one-hour, 41 minutes, beating out Alabama residents Kelium Griffin and Michael Edwards.  Leigh and Eskew got to keep the LS V8 engine that was also equipped with a variety of Holley Performance parts. Griffin and Edwards got a great experience and a free set of Race Ramps. While some participants were busy maneuvering around cones, and swapping out engines, the staging lanes at Beech Bend Raceway were also heavy with traffic. Drag racers competed in a variety of classes that were heavy with competition. After several rounds, the winners included, David Adkins won Pro LSX with a 4.54 ET at 162.86 miles-per-hour.  Bobby Admire won the LSX Rumble with a  12.016 ET at 110.96 miles-per-hour. Greg Delaney took first in the LSX All-Motor class with a 8.356 ET at 162.88 miles-per-hour. The LSX Drag Radial class was very competitive, but Mike Brown proved to be fastest with a blistering 7.117 ET at 196.10 mile-per-hour pass. Ray Litz won the GM Performance Shut Your Face Race with a best of 4.931 ET at 148.40 miles-per-hour. Kevin Rounsavall won the LSX Real Street competition, running an 8.440 ET at 162.74 miles-per-hour. Ronnie Hackehor won the 5th Gen Camaro Challenge with a run of 10.058 at 122.20 miles-per-hour. In the very competitive True Street brackets, participants added up their best average ETs in a variety of brackets. The fastest average belonged to Tommy Blackard with an average ET of 9.31.

The LS Fest Show & Shine also had numerous winners, but Gerry Kerna and her beautiful 1962 Chevrolet Nova took the Best of Show (learn more about this fantastic car in our Super Summit post). In addition, Thomas West and his 2000 LS V8 powered Honda Civic was awarded the Under Construction and Jet Hot High Performance Coating’s Sponsor Pick.