Because he didn’t know he was about to have a car accident.

The Lino Lakes, MN resident had just attended the 2011 Car Craft Summer Nationals in nearby St. Paul, MN, where—despite not having entered into any official competition—Buck’s 1963 Chevy II was the fastest car on the autocross track.

Buck was “a local guy just having some fun at a car show,” Car Craft wrote.

The editors had taken notice. They gave Buck an Editor’s Choice Pro Touring award and approached him about a vehicle feature in their publication.

He agreed. And the magazine did an on-site photo shoot behind a large building at the Minnesota State Fairgrounds.

By the time that vehicle feature was published, the car was non-functional.

“It was March. I was merging onto a two-lane highway. I wasn’t hotrodding it,” Buck said. “But I got into it a little.”

It was an incredibly mild winter that year—even in the greater Twin Cities. The roads were fine.

But there was an off-camber bank on the ramp. The rear end kicked left.

“I was looking at a concrete curb,” Buck said. “I overcorrected. I saw it coming. He was driving a Dakota pickup. He had nowhere to go.”

Buck muttered an expletive and turned his head away to avoid a face full of glass.

Buck’s car was still running. No one died or was even seriously hurt. The kid who hit him was 16 or 17, he said.

“It happened right in front of where the county Sheriff’s department corrals their vehicles,” he said. “I didn’t get in any trouble. All I had to do was fill out a report.

Not the car, though.

The headers were shot. The control arms were bad on the driver’s side. They had broken off and plunged into the header tube. The seat pan was twisted in two different directions. So was the body. The cowl was creased.

The car never went to impound. Buck bought it back because he wanted to salvage parts.

“Little things no one thinks about,” he said.

An original Power Glide steering column with modified internals to work with the rack and pinion.

“A custom battery tray with a kill switch. The seats I have are ’97 Camaro seats cut down six inches. I made them into a three-quarter back.

“I salvaged the seats. Until I took them out, I didn’t know how bad it got hit.”

“The motor was okay,” Buck said. “The tranny was fine—all the hard parts were—but the body was junk.” 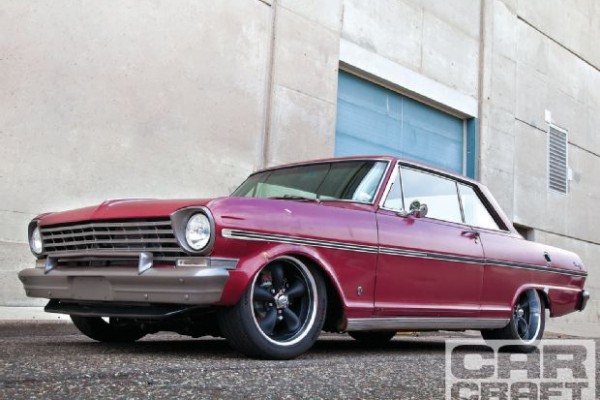 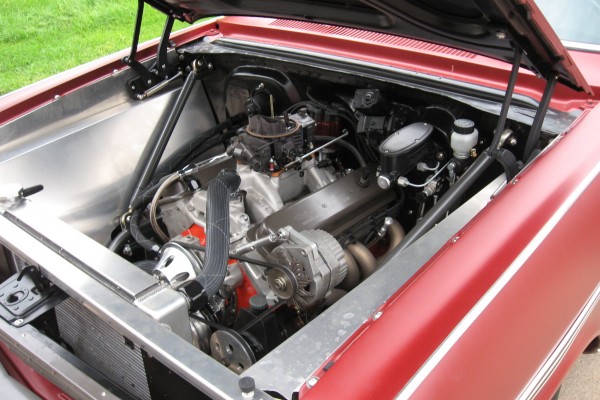 This is the original car. The one that got wrecked. The differences are subtle. The new bumper doesn't have license plate cutout. There is exhaust exiting just in front of the rear wheel well on the new one. The most-noticeable change might be the exposed gas cap on this one which is missing on the new one.

Buck decided against rebuilding the car.

He decided to clone it.

“That car completely set the tone for the second car,” he said.

Buck located an all-original 1963 Chevy II SS in Alabama. He had a friend go check it out for him.

The new project was delivered in April 2012.

“I’m by no means a builder,” Buck said. “I had done motor and tranny bolt-on parts, but nothing to this extent.”

In the second car, Buck moved the motor back. It shifted about 150 pounds toward the rear and he swears he can feel it from behind the wheel.

“The quality of the ride, and response, is so much more crisp in the second car,” he said.

He upgraded the suspension by adding double-adjustable shocks. He mini-tubbed it.

“I always wanted to have one with power AND a stick,” he said.

He bought a TKO 600 transmission for it.

“When you do that, you have to slightly modify the tranny hump,” he said. “I got the floor pans in and cut the tunnel out. In all honesty, it took me less time to move the motor back and cut through the firewall.”
The powdercoated grille and bumpers which he bought off Craigslist were a last-minute decision, Buck said.

“It just all kind of came together,” he said. “I didn’t do a Chip Foose design. Things just kind of evolved in both of the cars.”

Buck fabricated a custom removable harness bar—a center roll bar hoop with shoulder harness coming off of it. It’s split in the middle with a big sleeve connecting both sides.

“I can literally take it out of the car in two pieces and put my daughter’s car seat in the back,” he said. “I’ve got a lot into this thing.”

Buck spent a lot of time and money building two versions of one of the very best Chevy II SS’s we’ve ever seen. Still, he insists he’s nothing special.

“I’m just some schmo with a welder in my garage,” he said.

Buck has created a purpose-built muscle car that bows to no vehicle on the autocross track, or at the show and shine.

And it’s good enough to make us salivate.

Watch Buck run the autocross track at the 2013 Goodguys show in Columbus, OH: