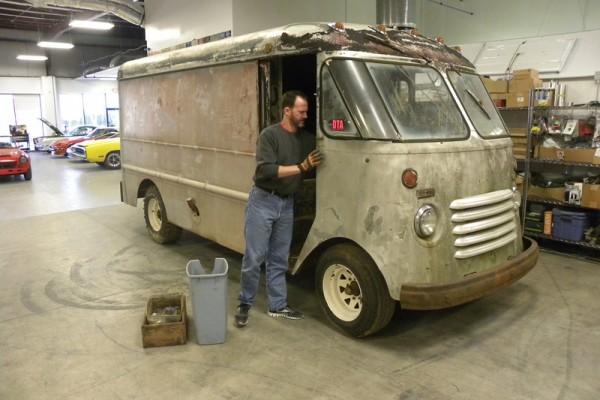 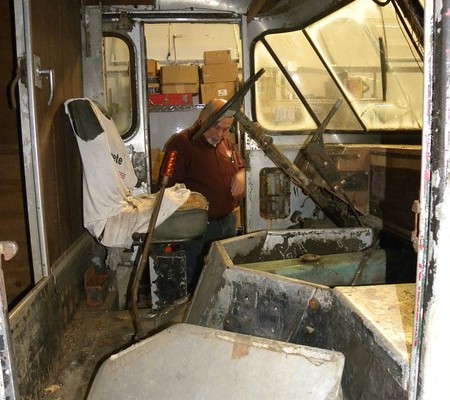 Here is the raw material for Rutledge Wood’s dream hot rod. The 1949 Chevy step van is not a factory Chevrolet product—it’s actually a Kurbside walk-through van built by Grumman Olson using a Chevy truck chassis and running gear. Vans like this delivered milk, bread, flowers, and other products throughout the 1950s and ‘60s. “I used to pass a van just like this one all the time when I was at the University of Georgia,” Wood said. “The day I went to inquire about it, it was gone. So when I found this one, I knew I had to have it.”

Judging from the interior, the van apparently sat for many years and was used as shed on wheels. Fortunately, the aluminum body survived the neglect, though the interior didn’t fare as well. That giant pry bar by the seat served as the shifter for the three-speed transmission.

Here are a few of the treasures that American Resto Mods found in the back of the van. We assume there were a few critters and creepy-crawlies in residence as well.

With 92 horsepower and 170-odd pounds-foot of torque, the 216 cubic inch inline six cylinder engine made for leisurely performance at best. While that’s fine for a delivery van, it’s not so great or a hot rod on the Power Tour. The 525-horsepower Chevrolet Performance LS3 crate engine will solve the lack of power problem quick nicely.

A 1999 Chevy 2500 HD ¾-ton truck donated its chassis to the cause. The chassis provides a stronger frame plus easily-modified late model suspension and brakes in one complete package.

The 2500 HD chassis was not a complete plug-and-play deal. While it was a perfect fit width-wise, the frame needed to be shortened 23 inches to fit the van’s wheel openings. American Resto Mods cut the frame just forward of the rear leaf spring shackle, then adjusted the frame to the proper length. The gap was bridged with a slice from another Chevy truck frame as shown. New body mounts had to be fabricated as well.

To get the van closer to Mother Earth, American Resto Mods cut a C-notch in the frame to accommodate a rear axle flip (from axle over spring to axle under spring). The notch allows approximately 10 inches of suspension travel.

The van’s floor had to be cut to accommodate the C-notch.

The breadbox on its new foundation. Once loaded with drivetrain and interior bits, American Resto Mods figures the van will sit around eight inches off the ground, a bit lower than you see here.

Since Wood wants to keep the van’s body in its natural aluminum state, the American Resto Mods crew attacked 64 years of oxidation and grunge. Fun was not had by all.

As we leave The Van build for now, American Resto Mods is busy test-fitting a dummy LS engine (you can see the fan peeking out from the grille opening) to see how much room is available for a radiator, engine accessories, and so forth. We’ll be back with more on this project!

“I am absolutely thrilled to be working with Summit Racing on this project,” Wood said. “Summit Racing is the ultimate candy store for guys like me—they have virtually every part you will ever need, and if you need help, you can talk to actual people who know their stuff and get things like a hot rod step van. That’s a big deal in my book.”

Rutledge Wood is a gearhead’s gearhead. Not only does he engage in automotive antics with Top Gear on History co-hosts Tanner Foust and Adam Ferarra, he hosts NASCAR Trackside Live on SPEED Channel and collects vehicles like our T-shirts collect grease. Wood has owned over 55 cars and trucks, ranging from a 1966 VW Double Cab and the 1968 Dodge Charger that was Kyle Petty’s high school ride to a Buick Roadmaster Wagon and a 1975 Bricklin SV-1.

So it makes perfect sense that Rutledge’s latest project is an aluminum breadbox on wheels. The Chevy step van is something that Rutledge has been dreaming about owning since his college days.

“I used to pass a van just like this one all the time when I was at the University of Georgia,” Wood said. “The day I went to inquire about it, it was gone. So when I found this one, I knew I had to have it.”

The Project
Wood found the Chevy in late 2012 and decided it would be the perfect vehicle to take on the 2013 Hot Rod Magazine Power Tour. Since it had to be the coolest breadbox on the Tour, Rutledge entrusted the build to American Resto Mods.

“Tons and tons of custom work needed to be done to make this thing cruise down the road,” he said. “I knew I needed to do it right and find a shop that I could trust, and I hit a home run with American Resto Mods.”

Mike Karbowski and the team at American Resto Mods began working on the Chevy in late 2012. The goal was to build something cool with big horsepower, but also make it reliable and comfortable for long distance drives like the Power Tour.

“We tossed the stock frame and replaced it with frame from a 1999 Chevy 2500 HD pickup,” Karbowski said. “We modified the frame to fit the van’s wheelbase and C-notched it in back to accommodate a rear axle flip kit. We did a lot of nipping and tucking to get the van body to fit over the frame, but everything sits nice and low, and we have modern suspension and brakes as a bonus.”

Other components include a full MagnaFlow exhaust system and one-off 20- and 22-inch wheels from Asanti Wheels.

What’s Happening Next
Well, a lot, actually—the goal is to have the van ready to go for the Hot Rod Power Tour, which is the first week of June. There’s a drivetrain to install, brakes and suspension to rehab, an interior to stitch, and a thousand and one other jobs. One item American Resto Mods doesn’t have to worry about is paint. Rutledge wants to keep the aluminum body au naturel with just a good scrubbing to remove decades of grunge and oxidation.

We have some initial build photos to share with you, plus a short video by Rutledge his own self talking about all the horsepower he’ll be getting from the Chevrolet Performance LS3 motor. We’ll be bringing you project updates and videos as we get them; you can also track the build on American Resto Mod’s website.