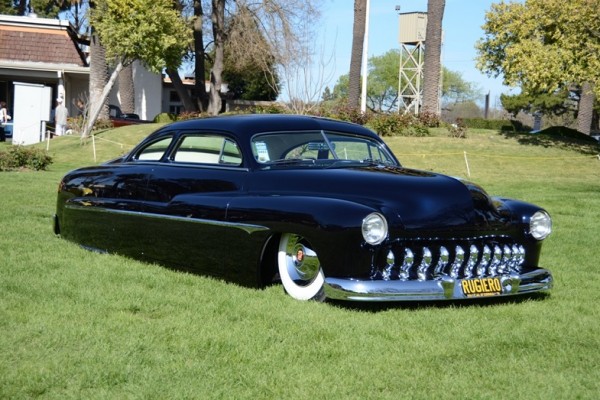 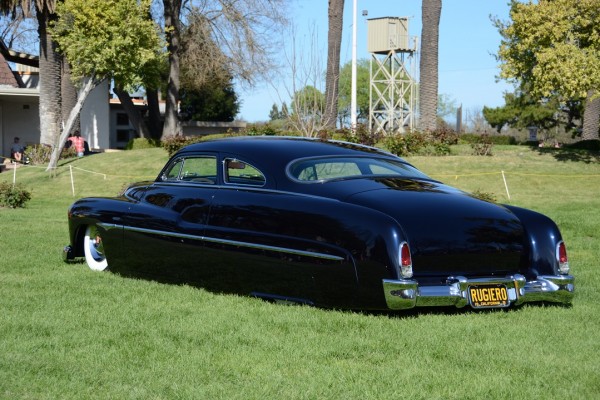 “I wanted a $30,000 flat black Merc custom,” Rogers said. ”That’s how this car started out. But once things got rolling and I began to dream, the project took on a life of its own. I’ve never really done things half speed so it’s not too surprising we went all in. We saw the possibilities of what it could be, and Bill was the man to take it there.”

Ganahl, a second generation hot rodder, spent many years as an apprentice working long hours at Roy Brizio Street Rods, honing his craft. He was introduced to traditional hot rods & customs at a very young age growing up in Southern California. His daily driver to and from Brizio’s shop all those years was a 1950 Ford sled. Indeed, it’s as if he was born to build THIS car. He’d be the first to admit however, he had a lot of help along the way.

Upon first glance, the Mercury’s perfect, radical four-inch chop grabs you and won’t let go. The top, forward-slanted B-pillars, and the addition of a 1950 Mercury rear window (among other subtle cosmetic enhancements) were artistically executed by Matt Townsend (Townsend Customs & Hot Rods). The addition of an evil 1953 DeSoto grille, 1949 Mercury dash and 1955 Ford side trim (featuring Packard spears) only enhanced the Merc’s curb appeal. The rich, mile-deep candy blue House of Kolor paint was sprayed by Joe Compani.

The engine bay, long ignored by most custom stylists, is just as beautiful as the car’s sleek exterior. The hand-fabricated engine compartment panels house the painted and lettered “Chevrolac” (Chevrolet small block with custom made Cadillac valve covers). Underneath it all is a full Art Morrison chassis. And get this—it drives just as well as it looks, requiring nothing more than a “pinky on the steering wheel,” according to Ganahl. He should know—he drove the Merc 60 miles from his shop in South San Francisco to Pleasanton for the show! We’re guessing the ride back home across the San Mateo Bridge was a sweet one with the Custom of the Year trophy riding shotgun on the period-perfect blue & white tuck & roll upholstery.

When reflecting on the big win, Ganahl summed up the project by simply saying: “A lot of talented people had a hand in building this car. In the end, we tried to build a classy, subtle Merc custom that didn’t have flaws—one that could be driven long distances. That became the ultimate focus of this car.”