Fill Out Your Brackets! The Muscle Car Match-Ups Tourney Is Here! 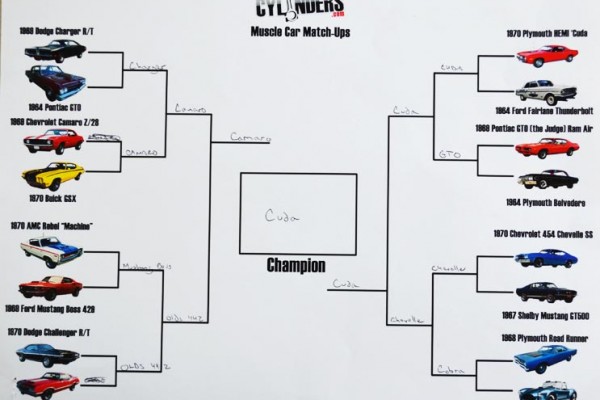 College basketball’s March Madness is upon us. Chances are you either: A) can’t wait to fill out multiple brackets, B) have grown tired of losing to the guy who fills in the brackets according to school colors, or C) just don’t care about basketball.

Love it, hate it, or indifferent, filling out tournament brackets has become somewhat of a rite of spring. Hot rodders want rites too, so we’ve created a special version of March Madness that all gearheads can get behind: Muscle Car Match-Ups. In this hot-rodded version of the Madness, we’ve placed 16 top muscle cars in a NCAA-style bracket to crown the best muscle car ever. And YOU determine the winner!

We’ll present our entire bracket below (Editor’s Note: Yes, we know some great cars didn’t make the cut—you try narrowing it to just 16). You can vote for your first round winners in one of three ways:

Our bracket consists of just 16 cars, and we tried to include vehicles from a broad spectrum of manufacturers to reflect the wide range of muscle cars that have been offered. With just 16 cars in the first round, some great cars missed our cut for this year–cars like the Pontiac Firebird, Mercury Cougar Eliminator, and others. See who did make the cut below. Widely credited as the car that ushered in the entire muscle car era, the 1964 GTO was actually an option package for the Tempest and sported a 389 cubic inch engine that put out 325 horsepower. The Chevrolet Camaro is one of the most famous pony cars of all time and has earned honorary muscle car status with us. The first-generation Camaro is the most sought-after, and its 302-powered Z/28 version was developed for Trans-Am racing.

Buick combined luxury with muscle. The 1970 Buick GSX, which was the high performance package for the Gran Sport and featured a stout 455 cubic-inch engine. The Stage 1 version used a more aggressive cam and higher compression for even greater output. We wanted to include an AMC in our brackets and could’ve easily gone AMX. Instead, we went with the 1970 AMC Rebel “Machine” because it came standard with AMC’s most powerful motor ever—the 340-horse, 390-cubic-inch engine. The Oldsmobile 442 started as an option package before becoming its own model. Before 1970, General Motors banned engines greater than 400 cubic inches on midsized cars. The ban was lifted, and Oldsmobile began offering the powerful 455 engine in all of its 442s in 1970. The 1964 Plymouth Belvedere introduced the world to the 426 HEMI engine. The HEMI-powered ’64 Belvedere was so potent that it won first, second, and third at NASCAR’s 1964 Daytona race. And HEMI fever was born. Need we say more? The 1967 model year was the first for Carroll Shelby’s legendary GT500. It came equipped with a 428 Police Interceptor engine, and a handful were available with Ford’s race-inspired 427 V8.

When GM lifted its ban on 400-plus cubic-inch motors in mid-sized cars, Chevrolet responded in a big way. Its popular Chevelle SS model was now available with a 454-cubic-inch engine, and an LS6 option gave the Chevelle 454 SS 450 horsepower. It was one of the most powerful vehicles that anyone could purchase. Meep-meep. The 1968 Plymouth Road Runner was a hero in that it made muscle cars affordable again. The 383-powered Mopar was all about muscle and offered few amenities. Chrysler passed the savings on to the consumer and a new generation of young enthusiasts was born.

Vote for your winners in the comments section!

Click on the slide show at the top of the post to see the tournament in bracket form and to view OnAllCylinders staff picks. Let the Madness begin! Check out our Round Two post here.

125 responses to “Fill Out Your Brackets! The Muscle Car Match-Ups Tourney Is Here!”