It has been 27 years since Route 66, America’s original east-west highway connecting Chicago to Los Angeles, was decommissioned.

Now, it seems the Mother Road is making a comeback of sorts. In 1999, the National Route 66 Preservation Bill was signed into law. Disney Pixar’s Cars movie brought the legendary road back to life (at least for a few minutes) in 2006. And now there are Route 66 car clubs, Route 66 books and memorabilia, and groups and foundations dedicated to shedding light on the highway’s cultural importance. You’ve even got people traveling thousands of miles to spend their honeymoon on Route 66!

Route 66 was officially established as a U.S. Highway in 1926 and was taken out of commission in 1985 after the famed road was gradually replaced by the Interstate system. During those 59 years, “America’s Main Street” was the country’s most famous east-west corridor. Mom-and-pop diners, motels, gift shops, and even entire towns sprouted up along Route 66. It became as synonymous with Americana as the American hot rod.

Hot rodding and Route 66 remain intertwined, and there are several ways you can rekindle the spirit of the Mother Road and celebrate its place in American motoring history.

There are a wide variety of websites and blogs dedicate to educating people about Route 66, preserving the road and its surroundings, and even helping nearby businesses. Here are a couple of our favorites:

National Route 66 Historic Preservation:
Description: A not-for-profit organization committed to preserving the legacy of Route 66. It includes a blog, which allows you to share photos and experiences from Route 66, as well as opportunities for you to get involved with the preservation.

You can learn what Route 66, past and present, is all about or re-spark your interest in the subject with a variety of resources. A few of our favorite websites dedicated to the history of Route 66 include Mother Road: Historic Route 66 and Route 66 University, which includes a glossary of Route 66 terms and essays from those who have traveled the famed highway.

You can also check out a variety of fun books on the topics. Here are just a few: It’s not too late to get your kicks on Route 66. Although the route has been officially decommissioned as a U.S. Highway, large segments of the road remain intact and

operational as state routes or business loops through towns.

Many of the Mother Road’s motels, diners, and filling stations have faded into the landscape, but you can still enjoy many nostalgic motels, restaurants, and souvenir shops that are dotted along Historic Route 66. Here are a few resources to plan your trip: If you can’t make it to Route 66, bring the spirit of the road to your home, garage, or man cave. You can get everything from tin signs and neon signs for your garage or basement, to weathervanes for outside. Here are some of our favorite Route 66 items: 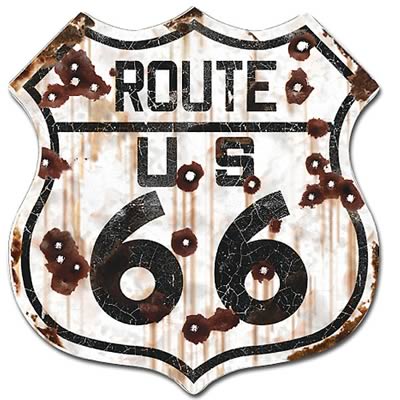 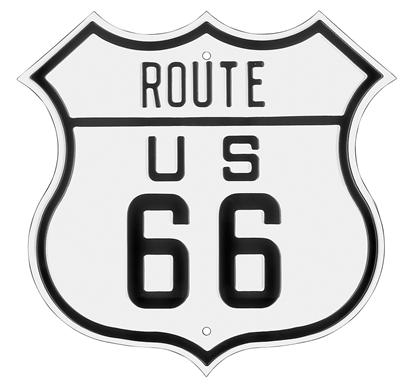 10 responses to “Friday Road Trip: Celebrate the Rebirth (sort of) of Famed Route 66”