If you’ve been a car, truck, or hot rod enthusiast for any length of time, chances are you’ve seen the centerfold spreads. Depending on what you like, you’ve probably yearned for, lusted after, or drooled upon the American beauty in some of the photos.

This is the story of one of those coveted centerfolds: Bud Hoffman’s 1964 Ford F-100.

Alright—minds out of the gutter, everyone, because the centerfold we’re talking about is the famous Summit Racing catalog centerfold (referred to as a “gatefold” for Summit Racing staffers). For over 20 years, Summit Racing has featured the very best in performance machines inside its bi-monthly Big Book catalog. Bud’s F-100 is gatefold #130.

So what’s involved with being featured in the Summit Racing catalog?

And exactly how do you become a centerfold feature?

The Summit Racing catalog production team scours shows and events across the Midwest to find candidates for its coveted gatefold spot. Team members have visited events like the Detroit AutoRama and the PPG Goodguys Show in Columbus, OH, along with Summit Racing-sponsored shows and local cruise-ins, in search of feature vehicles.

“I was up at Summit Racing’s TruckFest show and one of the folks from Summit approached me and said they’d like to do a story on my truck,” Bud said. “Quite a bit of time went by, and I figured they didn’t want to do it or they found something else, but sure enough they called me back.”

“I’ve been a Summit Racing customer for a long time and had seen many of those features over the years,” Bud said. “I never dreamed it would happen to me, especially because I did most of the work on the truck myself.”

His hard work also earned him a two-day visit to Maguire Photo in Akron, OH, where Bud would see his truck in a whole different way. For this gatefold, the Summit Racing team chose photographer Jim Maguire to bring out all the details on the old Ford. Although most Summit Racing centerfolds include just a handful of printed photos, a gatefold photographer will typically shoot hundreds and hundreds of photographs— everything from the entire vehicle to images of tiniest details that set each ride apart.

“It was a two-day process,” Bud said. “I think we were there until 5:00 or so the first day and until about 3:00 or so the second day. I never dreamed they would take so many pictures, but some of the stuff they took pictures of made me look at the truck differently. For example, the front emblem—I finally had to ask the photographer what he shooting, and he’d show me how different angles brought out unique details.”

While the truck was being photographed, Bud also was interviewed for the story portion of the gatefold. He was asked to provide detailed specs on the truck as well as background information on how the project unfolded, unique challenges that were presented, and why certain parts were chosen.

“It was pretty fascinating,” Bud said. “The whole thing just flew by. When I first saw one of the photos of my truck on the computer screen they had, that’s when it hit me: ‘Man, that’s my car!”

Look for Bud’s fabulous F-100 inside your latest Summit Racing catalog or here at OnAllCylinders shortly. In the meantime, check out these behind-the-scenes photos: 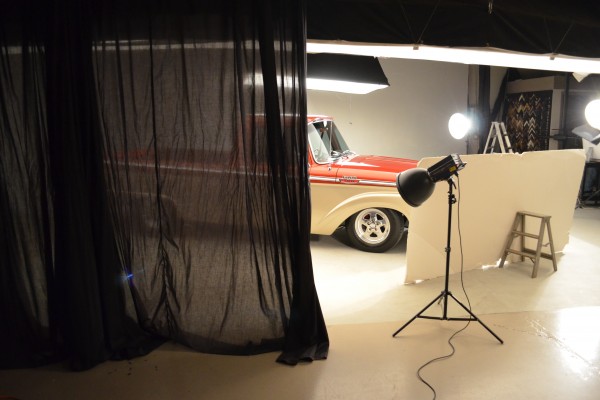 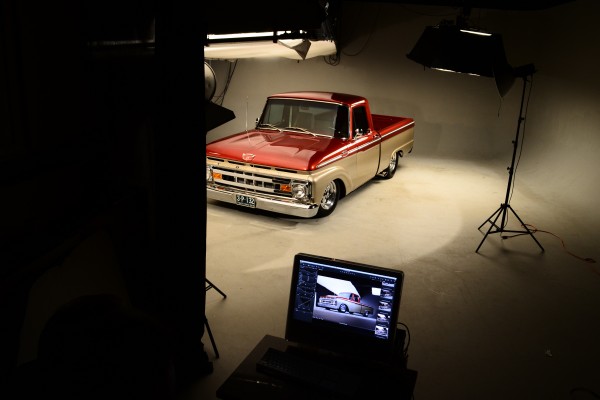