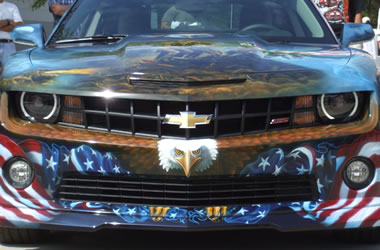 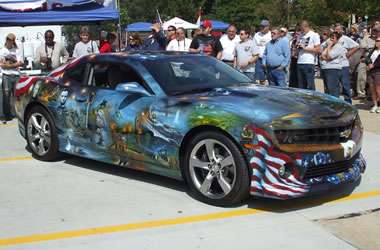 This story originally appeared on the Summit Racing website in September 2010, but is worth second, third, and fourth looks as we commemorate Memorial Day.

The “American Pride” Camaro is the result of the artistry and enthusiasm of Mountain Muscle Cars in Cosby, Tennessee. It features an artistic representation of the history of American freedom in a custom airbrushed work of art. A tribute to American history and heroes, including artistic depictions of military servicemen and women and U.S. Presidents, the incredibly detailed design makes this special Camaro a unique showpiece. The car will tour major events nationwide over the next year, starting with its debut at Summit Racing this weekend.

“We thank Mountain Muscle Cars for their incredible artistry in bringing this Camaro to reality,” Scott Settlemire, Manager Chevrolet-Cadillac Shows & Exhibits, said. “We’re delighted to be unveiling this work of art at the Northeast Ohio Camaro Club’s Fall Classic at Summit Racing, and we thank the men and women at Summit Racing for their continued support of the NEOCC.”

This unique Camaro will appear at many Chevrolet events and displays, and will be used to promote the Chevrolet’s Military Discount Program. U.S. Congressmen Phil Roe of Tennessee was so taken with the car’s inspiration and design that he donated an American flag to join the car’s nationwide display. That flag will fly over the U.S. Capitol building in Washington, D.C., to commemorate military service men and women who have lost their lives in the line of duty.