OK, so the joke is lousy. But Steve’s 1970 Ford TC Cortina coupe sure as heck isn’t, especially when it pulls the wind out of your lungs as he slams the AOD automatic into third and zings the 428-cubic-inch 351 Windsor to seven grand. No, we didn’t get to experience it firsthand. But combine the stroker motor’s big torque, some 295/50-15 rear rubber, and a featherweight body, and it doesn’t take much imagination to figure out what the ride would be like.

Ford built the Cortina coupe in England for UK consumption only, and none were officially sold in Australia. Steve bought his from a guy who brought it over from Blighty, then spent eight years turning it into a killer street machine.

Like gearheads here in the U.S., Australians are big horsepower junkies, even though it costs them about twice as much to build it. Steve first turbocharged the Cortina’s 1.6-liter four banger, then upgraded to a two liter four. Then he got serious and transplanted a hot 302 Ford V8 into the car.

After a miserable experience trying to get an EFI system to work on the 302, Steve took a cue from us Yankees and bolted in the seriously stroked 351.The engine was stretched to 427.8 cubes by boring the cylinders 30 thousandths and dropping in a custom-whittled 4 1/2 inch stroke steel crankshaft. The connecting rods are Trick Flow aluminum bits attached to 12.5:1 compression Keith Black hypereutectic pistons. The cam is a Comp Cams solid roller affair that sports a whopping .720 inches of lift.

Steve originally planned to modify a pair of Cleveland 4V iron heads to fit the Windsor short block. But after seeing a friend shell out big money for modified heads and a custom intake manifold, he went looking for a better solution. He found it in a pair of Trick Flow R-Series aluminum heads.

“The head (specs) were great straight out of the box, offered better heat transfer than iron, and weighed about a third as much as the Cleveland heads,” Steve said. “After a quick trip to the local machinist for some port and polish work, the Trick Flow heads had ports very close to 4V Cleveland ports. Plus, I could use a standard Windsor intake.”

The intake is an Edelbrock Victor Jr., topped by an 850 cfm Holley double pumper carburetor and a home-fabbed airbox with a K&N air cleaner. An MSD Billet distributor and 6AL box handle the ignition duties, and a pair of custom headers dump exhaust gas into dual three inch pipes with Flowmaster mufflers. The four-speed slushbox is an Art Carr-built unit with a 3,000 rpm stall converter and a full manual valve body (overdrive is electronic).

The Cortina’s suspension and rear axle were barely adequate for the turbo 1.6, let alone the big Windsor. Steve ditched the stock axle for a narrowed and braced Ford 9 inch with 31-spline axles, 5.14 gears, and a Detroit Locker. Steve also mini-tubbed the car to fit the big Yokohama tires, boxed the rear trailing arms, and added HAL coil-over shocks and disc brakes to all four corners. The wheels are custom-made aluminum rollers that look like modified Halibrands.

The Cortina’s body was a fine example of 1970s British build quality. Panel gaps were way off, and the quarter panel-to-trunk fit was so bad, the trunk lid would slide left to right and gouge out big paint chips when Steve launched the car. He fixed all that, then hand-formed steel front and rear beaver pans (roll pans in Oz-speak) and shaved the door handles, fuel filler door, and trunk lock. The front grilles, lights, and both bumpers are from an Australian model Cortina sedan. The paint is a special mix dark green called Steve’s Green.

The Cortina’s interior features four custom-upholstered bucket seats, a dash full of Auto Meter Phantom gauges, a B&M Pro Ratchet shifter to slam the gears, and those eye-catching Blue Oval aluminum door panels. There’s even a factory sunroof in case Steve wants to tan the top of his head.

You’d figure a car as nice as the Cortina would be a finished project, right? Fat chance. As you read this, the car is getting a square tube rear subframe and bracing, a homebuilt four-link suspension, a new core support for a big aluminum radiator, new floors, and a respray job. Seems going fast in Oz is a job that’s never done. 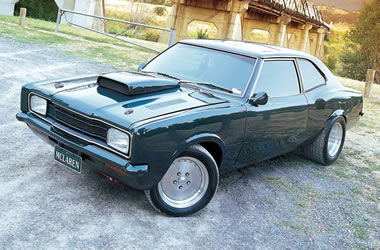 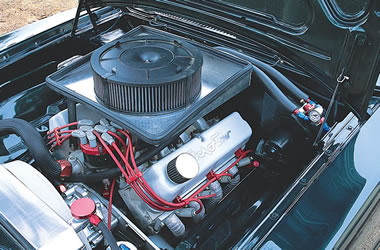 Ever see one of these before? It's a 1970 Ford TC Cortina coupe, built in very limited numbers by Ford of England. Steve McLaren of Canberra, Queensland, Australia never saw a TC either until he found this one, brought to Oz by a British expatriate. The car was pristine and ideal for turning into a rip-snorting musclecar. A mere eight years and big handfuls of Aussie dollars later, Steve was off terrorizing roos and sheilas all over Canberra.

Steve first popped a turbocharger the Cortina's 1.6 liter four-banger, then moved up to a two liter Ford four cylinder. He graduated to big boy school with a 302 Ford V8, a four-speed automatic transmission, and a nine-inch rear axle from a Mark III Cortina. After a $10,000 affair with an EFI system that wouldn't put out, er, horsepower, Steve ditched it for a stroker 351 Windsor. A .030 inch overbore and a 4 1/2 inch stroke billet crank punched the engine out to 428 cubic inches; an octet of Keith Black pistons gave it 12.5:1 worth of squeeze. The cam is a .720 inch lift Comp Cams solid roller that spins the valvetrain in a pair of Trick Flow R-Series aluminum heads with a mild port and polish job. Other items include an Edelbrock Victor Jr. intake, an 850 cfm Holley double pumper carburetor, and an MSD ignition.

428 cubes of V8 can twist the unibody Cortina into a pretzel in a big hurry. Steve mini-tubbed the rear of the car to fit the 290/50R-15 Yokohama tires, narrowed and braced the 9 inch rear axle, and boxed the rear trailing arms. He also added HAL coil-over shocks and disc brakes. The front suspension is stock A-arm, also upgraded with HAL coil-overs and disc brakes. Steve is currently rehabbing the Cortina with a square tube rear subframe, a four-link suspension, new floors, and other mods to help harness the torque.

The Cortina's fit and finish was so bad, the trunk lid would slosh around and chip the hell out of the paint on the quarter panels when Steve launched the car at the track. After hours of bodywork, the Cortina was straight enough to handle the dark green paint job. Steve made the front and rear roll pans, and shaved the door handles, fuel filler door, and trunk lock. The bumpers, grille, and headlights are from an Aussie-model Cortina. The wheels are custom billet aluminum.

Steve replaced the dash with one from a newer model Cortina, then filled it with Auto Meter Phantom gauges. Other cool bits include four bucket seats, a B&M Pro Ratchet shifter, and aluminum door panels with every Ford fan's favorite logo on 'em.