Do you believe in fate—the idea that someone or something is out there shaping your destiny? Being worldly types, we used to equate fate with astrology, Ouiji boards, and Miss Cleo the TV psychic.

But Ed Parker has changed that. He’s a respectable citizen by day, running a company that stripes asphalt parking lots in the greater Columbus, OH area. But on the weekends, he turns into “Fast Eddie,” and tears up asphalt a quarter mile at a time in an eight-second, street-legal 1967 Camaro.

Even Ed admits that his life was preordained.

“I was just born with it,” he said about his hot rod jones. “My father is an electrical engineer who doesn’t care about cars at all. Heck, my brother is a golf pro who can’t even change a tire!”

“I bought the car locally—it had just two previous owners,” Ed said. “I had always wanted it, but I had to wait until 1992 to buy it. The body and paint are original—the windows have never been out, and the front clip and doors have never been off the car.”

The same can’t be said for the chassis and drivetrain, though. John Holt Race Cars fabricated a four-link backhalf and a 10-point chromemoly roll cage for the Camaro. A custom nine-inch Ford rear axle with Moser axles and 4.11 gears hangs in place of the original GM 12-bolt, and the stock front suspension has Moroso race springs and Koni shocks.

So what does fate have in store for Ed Parker? It apparently wants him to go even quicker and faster, ’cause he’s building a 1969 Camaro to run in the Outlaw 10½-inch tire class. We think fate is in for one heck of a ride.

Special Thanks To: Ben and Andy Holt 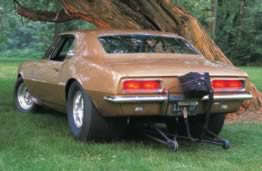 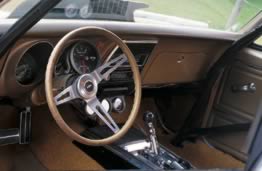 They set up the Camaro with a 2 x 3 inch tube backhalf and a four-link/Koni coilover suspension, fabbed a 10-point roll cage, and made room for those big Mickey-T ET Streets. The front suspension is basically Koni shocks and a pair of Moroso Trick Front Springs for better weight transfer. Strange disc brakes sit on each corner, as do Weld Aluma-Star wheels. They're not suspension-related, but the Holts also built the 21⁄4-23/8-21⁄2 inch step headers and 41⁄2 inch dual exhaust system.

Other than a row of Auto Meter gauges, a Hurst shifter, and the Simpson belts, you'd swear the Camaro's interior was as factory-original as the body. The rear seat was removed to make room for the wheel tubs, and the front buckets were lightened to reduce weight. Ed's mom Patty did a great job stitching the upholstery in the factory gold vinyl and nylon.

That's Ed Parker on the right, holding the United States Fastest Street Car Shootout championship belt and shaking hands with runner-up Gary Box. Ed qualified Number One with an 8.187/165.88 pass, and ran an 8.076/170.00 in the final to defeat Box. The rivals' roles were just the reverse in 2001 when Gary defeated Ed in the Ohio's Fastest Street Car Shootout at Norwalk Raceway Park.