Consider Ford’s venerable F-100 pickup. It’s been around for over 50 years. It’s been customized by vast legions of Blue Oval fans, most of them born long after it came out. According to our calculations, that means at about seven kajillion customizing ideas have been tried out on the Effie since 1953. The question is, what could anyone possibly do to the truck that’s fresh and original?

Fortunately, there are guys out there who are made for such an epic challenge—guys like Bob Long. Bob has a lifetime of experience with Ford muscle, starting with a ’41 convertible back when he was just 16, and he still owns the 1967 Galaxie he bought new. Bob runs his own machine shop in Brimfield, OH and taught himself just about every hot rod trick in the book.

“I think he bought it so that we could work on it together,” Bob said, “but then he got interested in other things, like racing dirt bikes. I really wanted to keep working on a pickup, but I always liked the ’54 better. In 1993, I found one that was pretty much shot, but it ran okay. I even drove it around for about six months, then I started taking it apart.”

Originally, the project started as a pure resto job, but Bob’s wife Carolyn changed his mind.

“She showed me how much I had spent on it already, and I figured that I might as well go Pro Street for that kind of money,” Bob said.

It took 10 years for Bob to get the Ford to where it is today; he figures he did 90 percent of the work himself with just a little help from his friends. Bob admits he had no solid plan—he just made it up as he went. Fortunately, his fine-tuned rodding skills came up with some unique elements including the tube grille, the hand-cut wood bed, and the custom-made taillights. The F-100’s paint was formulated to match a Honda Goldwing motorcycle owned by the Longs. “It’s a Chrysler color—Inferno Red Pearl Metallic, with a little extra pearl,” Bob said.

Going Pro Street meant the F-100 needed some serious muscle to back up its handsome looks. Bob started with a Ford 390 FE and had it bored .030″ over by his friends at Portage Performance. He fitted the engine with performance goodies like TRW pistons, a Comp Cams hydraulic cam, a factory tripower induction system, and Hooker headers, then topped it off with valve covers and an air cleaner Bob fabricated himself.

The F-100 made its debut at the 2004 F-100 Supernationals in Knoxville, Tennessee. Bob won a trophy at the event, and he’s been bringing them home from shows ever since. While he trailers it out of state, Bob drives the truck to local shows. “I love meeting younger folks at car shows—I always keep an eye on them for new ideas.”

What’s next for the man who breathed new life into an old ride? “I’ve got a few ideas left to try out on the truck,” Bob says, “but my wife has her heart set on a ’32 coupe next.”

Sounds like it’s time for some re-imagining, Bob Long style. 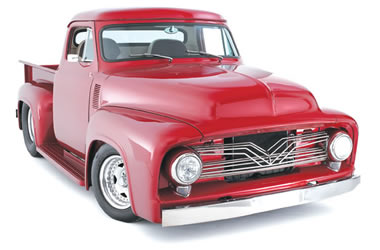 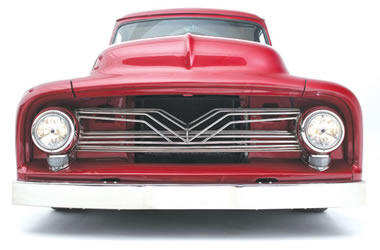 The 1953-55 Ford F-100—the beloved Effie—is the most popular classic truck among customizers and restorers alike. F-100s have been lowered, lifted, chopped up, and tricked out in more ways than we can think of. But we can count on guys like Bob Long to come up with new ways to skin an F-100. See if you can find all of the modifications underneath the Chrysler Inferno Red Metallic paint—we’ll bet you don’t find them all.

One of the most striking features of the truck is the tube grille. Bob and his friends at Quick Service Welding in Kent, Ohio, came up with the one-of-a-kind grille. “I always liked the grilles on the ’55 pickups better than the ’54s, so we tried to come up with a way to duplicate that look with tubes,” Bob said. “It took a lot of work, but it was worth it.” We most definitely agree.

Bob had a new set of stock-style chrome taillights ready to mount on the Ford— until he realized he never really liked the way the lights just stuck out from the bed sides. So, he traced out the lenses and molded buckets into the rear fenders. “The hardest part was working up the nerve to cut into those $400 fenders,” Bob says. “It took me two weeks!”

Inside the engine compartment resides a 390 FE with a rare factory tripower setup off of a 1962-vintage, 405 horsepower 406. Bob also used the factory heads from the 406; he had them fitted with hardened valve seats so he can run unleaded gas. Bob fabricated the valve covers and air cleaner himself. “Nowadays, you can get those parts right off the shelf!” he told us.

The oak bed was hand-cut, sanded, and finished by Bob; stainless steel stringers accent the work. This is actually the second bed—the first one never made it onto the truck. As Bob said, “I had the first one (bed) all cut and laid out in my barn, when a storm dropped a branch through the roof and dumped a ton of water on the unfinished wood.” We hate it when that happens.

The interior was designed by Bob’s wife, Carolyn, and Scott from Unlimited Upholstery in Randolph, Ohio. The seats are all-Ford, pirated from a 1993 Lightning. “A friend of mine had a Lightning, and I loved the seats so much that I got a set for my truck as well,” Bob explained.