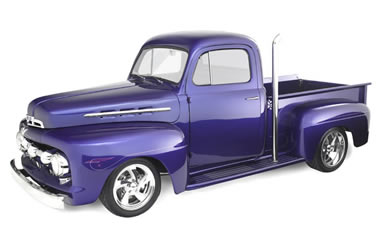 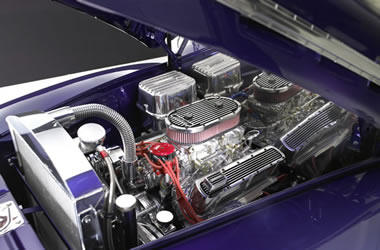 A Porsche it ain’t, but this old hauler has what it needs to handle modern traffic. Underneath the F-1 is a stock frame with a boxed front section with a Mustang II crossmember. The front suspension is TCI’s Mustang II-style setup with upper and lower control arms, coil springs, and shocks. Single-pack rear leaf springs hold up a Currie 9 inch Ford rear axle. Wilwood disc brakes, Boyd Coddington G-Rodder hoops, and BFGoodrich g-Force T/A tires sit on all four corners.

“Bill used to drag race in this truck,” Scott told us. “We found some time slips in the glove box when we got it. He ran in the 13s, which is impressive considering that it was pretty stock other than the GT-40 crate engine he had dropped in.” Scott, Don, and Lenny left the long block pretty much alone, only adding a Ford Racing B303 roller cam. The rest of the motor got the treatment, though—polished Edelbrock dual quad induction, Edelbrock Elite valve covers and air cleaner, March billet serpentine pulley system, chrome Powermaster alternator, even polished ARP fasteners. Heck, even the firewall is polished. To make driving the F-1 a little more bearable, the four-speed gearbox was replaced with a Ford Racing Tremec five-speed.

The cabin is an artful blend of retro style and high tech. The bench seat is the original equipment, reupholstered in gray Naugahyde. The polished Flaming River steering column is topped with a banjo-style steering wheel; blue Dakota Digital digital gauges sit in the factory gauge locations. A Hurst shifter with a custom-made stick is attached to the Tremec five-speed. The “Blueberry Hill” pinstriping on the doors (done by local legend Denny Didit) pays tribute to the original vision of the truck.

This story originally ran in the Summit Racing catalog and first appeared on SummitRacing.com on 9/6/2007.

Don Barr is a Porsche guy. His 1983 Porsche won a National Preservation Award at the 1998 National Porsche Parade in Steamboat Springs, Colorado. He used to race 944s on the weekends. And his good friend and former race crew chief Lenny Darr happens to be a Porsche mechanic.

“For years, my son Scott had been on my case about the two of us restoring some American steel together,” Don said. “Another friend of mine, Bill Sonnie, was suffering from cancer, and his bills were piling up. He had started to restore this truck with the theme of ‘Blueberry Hill’ and I decided to buy it from him to help him out. The rest just sort of came naturally.”

When Bill ultimately succumbed to his illness, Don, Scott, and Lenny decided the best way to honor their friend was to finish the Ford. The frame-off restoration took three years. Each man had their assigned tasks —Lenny did most of the wrenching, Scott researched parts and pitched in on the labor, and Don provided the work space and scrutinized every detail until it was just right.

“The journey was the real reward,” Scott said. “Spending time in the garage with these guys was a tremendous experience. We all learned a lot.” Flipping through the project photo album, Lenny adds, “It was a truck that looked good from about 100 feet away when we started. We wanted to just clean it up and make it look good from about 25 feet away. But Don and I are big fans of the fit and finish of Porsches, and it just never looked right to us in that light. So, we tore it all down and started from scratch. We’d put stuff together and then take it apart again and again until it looked right.”

Lenny laid down the truck’s color-shifting blue pearl paint, which was inspired by the color of a real blueberry.

“I hadn’t really painted anything in years, but I’m pretty happy about how this turned out.” Lenny said.

Lenny and Scott designed the functional exhaust stacks with a little help from Stainless Works. Inspired by a technique used on powerboats, Scott came up with the idea of using stainless steel bulkheads to bring the stacks through the floorboards. When you get on the ground to admire the stacks, you’ll also notice the pinstriping on the underside of the running boards, the frame, and on the driveshaft.

The F-1 came to Don with a Ford Racing GT-40 crate engine hooked to the original four-speed and rear axle. “[When] we started driving it to car shows, we couldn’t get through a traffic light without shifting,” Lenny said. “That’s when we got the Ford Racing Tremec five-speed and a 9-inch Currie rear-end from Summit.”

“I’d totally love to put a 347 stroker kit in it,” Scott said, “That seems to be a great way to add some naturally aspirated horsepower. If we do that, we also might replace the bouncy stock bench seat with some buckets to hold us in a little better.”

Like most project vehicles, this Ford will probably never really be done. But we gotta say, it’s a fine example of what a couple of Porsche guys can do when they get a hold of some American iron.