Contractor Bill Watkins is a sentimental man who loves his wife and his kids. His commitment to his family is so deep that he kept this project car—a fiery and fierce 1969 Plymouth Barracuda fastback—on hold for 20 years.

“With the kids in school, and then traveling all summer for baseball and other activities, I just didn’t have the time!” he said. “I had to leave the car in the garage, partially restored. About once a summer, I’d remove all the garage stuff I had stacked on it, evict the cats that were living in it, and roll it out. I’d look at it for a while, sigh, and then roll it back in.”

Bill had a life-long obsession with Mopars, especially fastback ’Cudas. He grew up reading all about the exploits of local legend “Akron Arlen” Vanke, the team of Ronnie Sox and Buddy Martin, the wheel-standing Hurst “Hemi Under Glass,” and the LimeFire Barracuda funny car.

“I always thought the 1967-69 Barracuda was the best-looking muscle car of that era, and I wanted to build a fitting tribute,” he said.

Bill bought this Barracuda in 1971, right around the time he started dating a Camaro-driving young lady named Barb. In spite of the rivalry, they married, and, when the time came for them to raise funds to buy a new car together, Barb allowed Bill to sell her Camaro and keep his ’Cuda. That is true love.

Bill tinkered with the car over the years, hand-fabricating an amazing aluminum cross-ram intake using a circular saw, a plumber’s drill, and a router.

“I got the idea from John Barker, who had built a 383 for me back in the ’70s. His original plans were too sophisticated for me to do, so I simplified them and hacked it together. After a month I taped it all together and took it to a welder, and he finished it,” he said.

Ever-humble, Bill figures, “I didn’t know it would never work, which is probably why it worked!”

In 1982, Bill started to restore his treasured ’Cuda. After three years of rust repairs and other body and suspension work, Bill found himself stumped by the paint. He also started running short on time, so he rolled his patched and primered dream project into the back of the garage. Over the years, he’d enjoy other Mopars, but that ’Cuda had a permanent parking spot in his heart, too.

Finally, in 2005, with the nest empty and the summers full of free time, Bill and Barb hit the Chrysler show circuit.

“Back in the day, it was tough to find performance parts for old Mopars,” Bill says. “But at these shows, I was amazed at how much stuff was out there!” It was a front end kit—an AlterKtion kit from Reilly MotorSports—that inspired Bill to get back to work on the Barracuda.

This time, Bill went in a new direction, pursuing the essence of a Super Stock while maintaining a mostly-stock appearance.

“I figured with all the effort involved, I wanted to end up with something other than a frost green grocery-getter with a 318!” he said.

To that end, Bill dropped in a big Plymouth 440, transplanted from another ’Cuda. Portage Performance bored and stroked it out to 496 c.i.d., and then Bill took it to his friend Rod Kuchenbecker. Rod assembled it like a “Best of the Summit Racing Equipment Catalog” highlight reel, sorted out some electrical issues, and topped it with Bill’s custom-made cross-ram intake.

While Bill handled a lot of the final assembly, he did find a few things beyond his skills, like how his unique engine configuration required a custom set of headers. Fortunately, a friend introduced Bill to Jim Palosi, proprietor of Customs Unlimited of Ohio. Bill gave Jim some vague instructions about the headers, and two weeks later, Jim had them done. Bill thought they were so nice, he had Jim ceramic coat them, too.

Eventually a pattern formed: Bill kept coming back to Jim with wild ideas, and Jim made them happen. That included the subtle rear spoiler (inspired by a 1969 Challenger), fiberglass front fenders, roll cage, and the hood scoop modified to clear the special intake and carbs.

“The trickiest part was probably the mini-tubs,” Jim said. “We had all the usual challenges, like relocating the trunk hinges, but Bill also wanted the bench seat to look stock.”

Once the paint was dry and the last bolts were cinched down, Bill and Jim loaded the “Agent Orange” Barracuda onto the trailer and cruised over to the 2009 Canton Hot Rod Show (Canton, OH), where it won Best Paint and a Diamond Award.

“We took the judging sheet home and started working on the little details they pointed out,” Bill said.

The extra work paid off, as the car took home a wealth of trophies at local shows, eventually earning 1st Place: Mild Custom Hardtop at the 2010 Cleveland Autorama and Grand Champion at the 2010 Canton Hot Rod Show. Even better, he got to park next to an official Sox & Martin replica Barracuda at a show in Columbus, OH.

When we asked Bill what is was like being a Barracuda celebrity, he was literally speechless. When he finally found his words again, he said, “It’s been so amazing, talking to all the fans, making new friends. It’s like a dream come true.”

As cool as this ’Cuda is, Bill says the car is still only about 95-percent done. His finishing touches will include some billet aluminum pop-up hood pins, polishing the intake, and sharpening up the old-school throttle linkage.

“I also have a few changes I’d like to make on the back seat,” he says, glancing sheepishly at Jim.

Jim just rolls his eyes a little, as if to say: “Here we go again.” 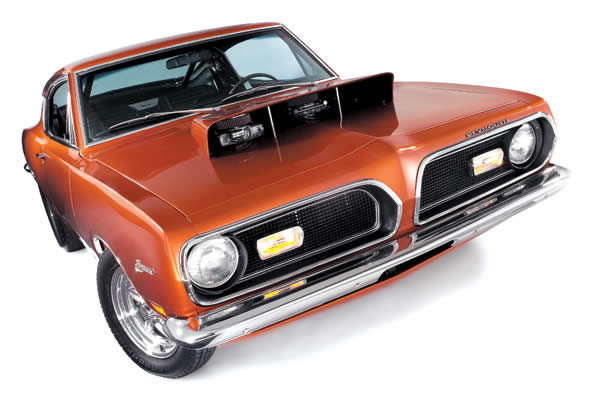 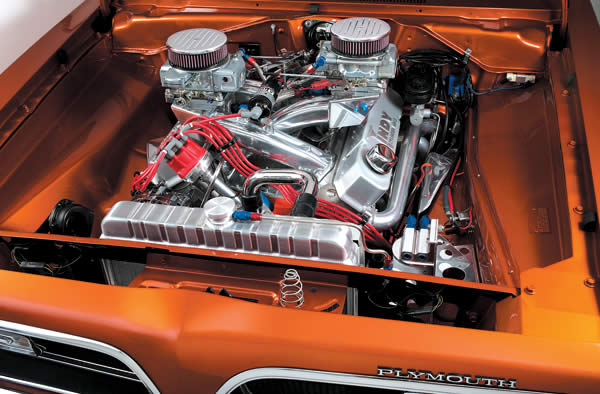 Sometimes, a little procrastination pays off. After waiting 20 years to work on this car, Bill Watkins felt he couldn’t settle for the simple restoration he had originally planned. Instead his target was, “the essence of a 1968 Super Stock, but without being a clone.”

The hood and Super Stock hood scoop had to be specially modified to make room for the twin carb and cross-ram intake setup atop the engine. Bill extracted a factory 440 from another Barracuda and turned it over to his friend Rod Kuchenbecker for a thorough rebuild. Rod had Portage Performance turn it into a 496 stroker, complete with an Eagle 4.150" stroker crankshaft, and then he built it up with parts like Ross forged aluminum pistons, a Lunati Voodoo hydraulic cam, an MSD Pro Billet distributor, a Mopar Performance 6AL CD Ignition Box and voltage regulator, and more. Bill dropped it in himself and added a Milodon oiling system.

Before it went into hibernation, the body of the Barracuda was carefully repaired by Bill. He also restored the original grille inserts and the trunk trim panel. After rebooting the project, Bill had Jim Palosi apply that Prowler Orange paint. “I wanted a stock color, but better,” he says. “I originally had a whole graphics scheme worked out, but the paint just looked so good by itself we let it be.”

Bill wanted to make the interior look factory-fresh, but with a few custom touches. JW’s Upholstery recovered the front buckets and floors with period-appropriate vinyl and loop pile carpet. There’s also an aluminum dash insert sporting Auto Meter Pro-Comp and Sport-Comp instruments, and the factory console has been modified to fit the TCI Outlaw shifter. The most radical change to the interior is one you can’t see: the storage panels on the back bench seat were trimmed to fit over the mini-tubs, concealing them from inside.

“Agent Orange” gets around on Billet Specialties Street Lite wheels, wrapped in BFGoodrich rubber. Bill can vividly recount the horrors of standing on the ineffective stock drums to little effect, so he upgraded to the big stopping power of Wilwood Dynalite discs.

Let’s face it: resto cars just ride like old cars. That’s why Bill went with a thoroughly modern suspension instead. In fact, it was his discovery of the Reilly MotorSports AlterKtion front end kit that inspired him to renew this project! Out back, the stance is maintained by Chrysler Super Stock biased semi-elliptical springs and QA1 adjustable aluminum shocks.

Special Thanks
My wife Barb, who let me sell her Camaro so that I could keep the Barracuda 35 years ago, and for converting into a true Mopar lover.
Jim Palosi for bringing all of my vague ideas to life, and all of the guys at Customs Unlimited.
Rod Kuchenbecker who sorted out all of my electrical issues and worked his magic on the engine and transmission.