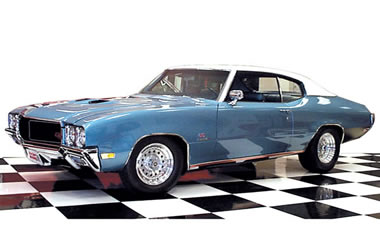 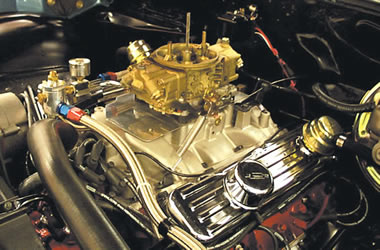 Here is the volunteer for our Holley carb shootout-Richard Lasseter's 1970 Buick Gran Sport with a Stage 1 455. The GS beat out a 1970 Plymouth GTX Hemi in a magazine "shootout" way back in 1984, and is still capable of mid-11 second quarter miles. In 1996, Lasseter had the Buford restored back to the condition you see here by Gran Sport Autobody in Montreal, Canada.

Test One: 1,000 CFM Holley HP The first item of business was to baseline the Buick with the big carb. Holley engineers then replaced the "Brand K" air filter with one of their Power Shot air filters. Designed with deeper pleats to increase filtration area with less restriction, the filter bumped up performance by about two horsepower in the mid- and upper-rpm ranges-not bad for about five minute's work.

As delivered to Holley's chassis dyno, the three-run average was an impressive 390.5 rear-wheel horsepower at 5,590 rpm and 472.3 foot-pounds of torque. Afterward, the Holley crew replaced the air filter with their 14 x 3 inch Power Shot filter. A leaking header gasket limited testing with the new filter to a single pass, but the results showed an increase of about two horsepower in the mid- and upper-rpm ranges.

Test Four: 870 CFM Street Avenger The engineers bolted on a 870 cfm Street Avenger carburetor (HLY-0-80870) for the next test. Designed to run right out of the box, the Street Avenger has fully adjustable vacuum secondaries, electric choke, #78 primary jets, and a 30cc accelerator pump.

Four runs were made this time, with the power output averaging 404 horsepower at 5,430 rpm and 512.5 foot-pounds of torque at 3,240 rpm. That's almost 14 more horsepower and 40 foot-pounds more torque than the baseline average-not bad for a "street" carburetor.

Test Five: 950 CFM Holley HP Retest Based on this testing, the Holley HP 950 double pumper seemed to be the best overall carburetor for the 455. It was decided to do one more test, less the Adjust-A-Jet kit, to make sure. Three more runs resulted in an average of 409.46 horsepower at 5,540 rpm and a whopping 527.4 foot-pounds of torque at 3,290 rpm. That's a net increase of 18.96 horsepower and 55.1 foot-pounds of torque over the baseline runs.

Richard Lasseter made hot rod history way back in 1984 when his 1970 Buick Gran Sport Stage 1 automatic beat a Plymouth GTX Hemi four-speed in a shootout sponsored by Car Review magazine (now Muscle Car Review). When the tire smoke cleared, the Stage 1 455 had beat the Hemi with a best run of 12.30 at 110.97 miles-per-hour.

Fast-forward a bunch of years. Richard still owned the GS (affectionately known as Ol’ Blue), and was asked to participate in another shootout. This time, it was a contest between carburetors on the chassis dyno at Holley Performance Products.

The idea behind the carb shootout was simple. Baseline runs would be made with the car in “as-is” condition, followed up with runs using three different carburetors: the 1,000 cfm Holley HP the 455 came with. a Holley HP Series 950 cfm double pumper, and an 870 cfm Street Avenger with vacuum secondaries.

The Holley engineering team conducted the testing and installation chores. The results were averaged to determine the comparison numbers.

In a classic case of “bigger is not always better,” the Stage 1 455 made more power with the 950 HP double pumper than with its original 1,000 cfm HP carburetor. The relatively low-revving Stage 1 doesn’t require any more than 950 cfm to make horsepower.

It is important to point out that the tests were conducted with a full 2.5-inch dual exhaust system. If the GS had open headers or a larger set of pipes, the extra breathing capacity might have made the bigger carburetor a better choice.

Another factor affecting the results was the 10-inch torque converter. The dyno revealed it stalled between 3,400-3,500 rpm under load at full throttle—too loose for the combination. Because a loose converter tends to soak up horsepower and turn it into heat, the converter might have cost us 15 to 20 horsepower at the rear wheels. Another dyno session would tell us for sure. Maybe next time, huh?