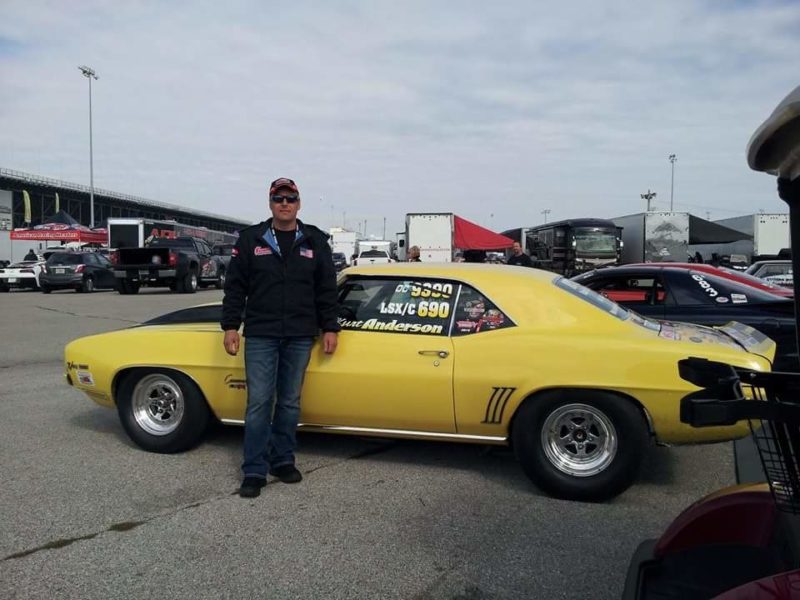 This is Kurt Anderson. He’s a master craftsman in both classic muscle car restoration AND building race cars. When he’s not in the shop, he’s winning sportsman championships in NMCA. It’s enough to not like a guy, but then you meet him and you can’t help yourself. No, his car’s not for sale. But that shouldn’t stop you from asking. (Image/Shawna Anderson)

He bought it for $1,700, which the Eau Claire, WI native said he had saved from mowing lawns, shoveling snow, and a paper route.

“My dad had to drive it home for me,” Anderson said in an OnAllCylinders interview during qualifying for the NMCA All-American Nationals at Summit Motorsports Park.

The goal was simple: Have it restored by the time he was 16 and could drive legally. The year was 1981.

A high school work-release program allowed Anderson to get out of school a couple of hours early every day. More money. More experience. Faster restoration of the ‘55 Chevy.

“I took all that money and stuffed it in the car,” he said. “All I wanted to do was work and make as much money as I could.”

The ‘55 Chevy was a street/strip car into which the previous owner had swapped a 327.

After four years of sweat equity and most of his money, one of his friends offered to buy it.

Anderson declined. It wasn’t for sale, he said.

And what does a teenager do with the largest pile of money he’s ever had? Duh, you buy a 1969 Chevy Camaro. 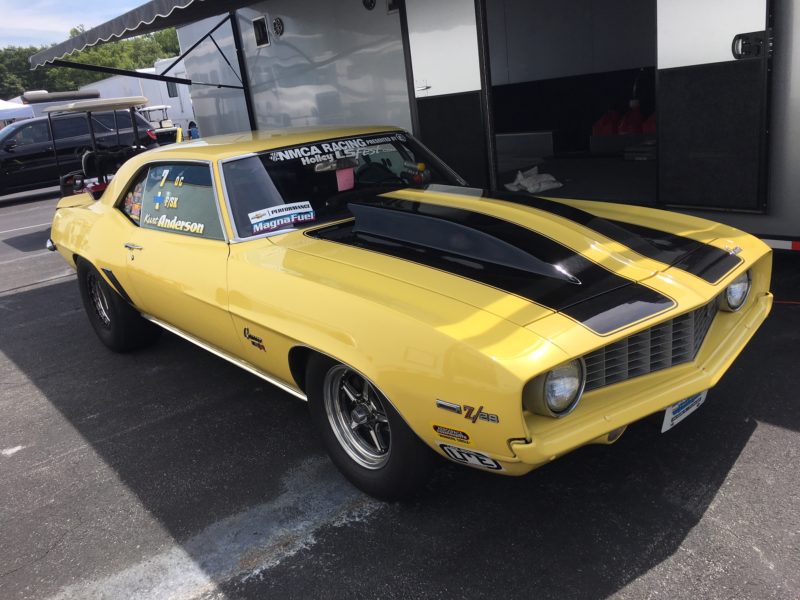 This is not Anderson’s first ’69 Camaro. In fact, he didn’t even do the original build, which is unique in Anderson’s history with his favorite year/make/model vehicle. Anyone who pays attention to sportsman racing likely recognizes it, because Anderson wins a lot. (Image/OnAllCylinders)

And then it was déjà vu all over again. He poured time and money into the car, only this time, he was hell-bent on drag racing it.

He’d built himself a 12-second car, and he spent the next four years getting a bunch of racing experience.

He learned how to develop a consistent routine from the staging lanes, to the burnout box, to the launch.

And he learned that if you keep saying no to people asking to buy your car—and they really want it—they’ll keep offering more. So much more that, despite Anderson’s reluctance to sell, he could no longer resist the windfall from a build, knowing he can buy a new car and build it even better.

“Every car I’ve sold has never been for sale,” he said.

Anderson was 22 when he sold his second car.

That sale earned him enough money to start a business doing what he always loved and believed in—restoring muscle cars and building race cars.

The Many Faces of Kurt Anderson 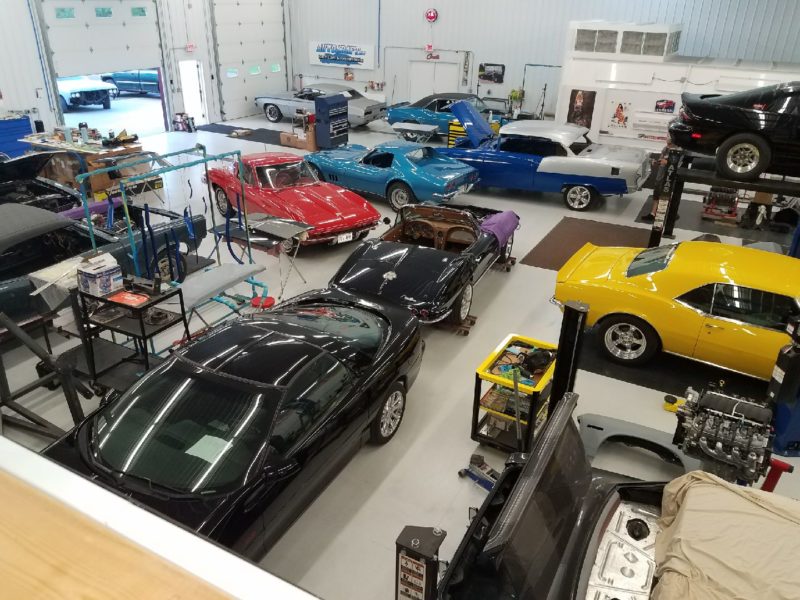 Some of the cars adorning the pristine space inside of the Autokraft shop belong to Anderson, and many are customers’ cars in various states of restoration. (Image/Shawna Anderson)

Have you ever heard the phrase “Jack of all trades, master of none”?

With Anderson, it’s more like “Jack of all trades, master of all.”

Anderson, 50, owns Eau Claire-based Autokraft Race Cars and Restorations, where they build and restore ridiculously nice cars in a ridiculously nice 13,000-square-foot facility that includes a clean-room environment for painting and assembly.

How many guys do you know who are masters of both classic muscle car restorations AND building dominant purpose-built race cars—and then shreds competitors from behind the wheel at national drag racing events several weekends per year?

Anderson and his wife Shawna are now familiar faces in NMCA and NMRA drag racing circles.

Just one year after restoring a rare Buick GS 455 owned by NHRA Pro Stock driver Jason Line which earned a score of 999 out of a possible 1,000 points from the judges at the Corvette and Muscle Car Nationals in November 2017, Anderson is a legitimate threat to win NMCA championships in TWO racing classes—Open Comp and Street Kings. (He is the defending champion in Street Kings after taking the crown in 2017.)

It’s almost obnoxious, but he gets away with it because he’s the kind of guy pretty much everyone likes and respects—including the racers he’s eliminating with his dominant ‘69 Camaro race car (which is like the seventh or eighth one he’s owned).

Anderson’s current ‘69 Camaro race car is unique in that he didn’t build it.

“The original intention was to race this car until I got my other car done. (Yes, the other car is also a ‘69 Camaro.) But I never finished it,” Anderson said.

For Anderson, drag racing success as a driver comes down to consistency—always doing the same routine before making a pass—and then learning from any mistakes that were were made in order to avoid repeating them.

“You never stop learning,” he said. “I’ve lost so many races because of mistakes. That’s drag racing. It’s a game of making the least mistakes. It really is.

“If you’re good on the tree and hit your number, you usually win. But that’s really hard to do.”

We assumed Anderson came from a family who served motor oil at dinner and that he had grown up wrenching on hot rods with his dad.

Anderson’s father and brother were avid hunters and had virtually no interest in motorsports.

Anderson’s drive to save all of his money as a youngster, and his discipline to purchase a car at age 13 with a long-term goal of having it ready when he was 16, and then evolve into a master automotive craftsman and racing champion came from somewhere else.

Presumably, some magical unicorn stable in Wisconsin. We didn’t ask, because we didn’t want anyone to ruin it. 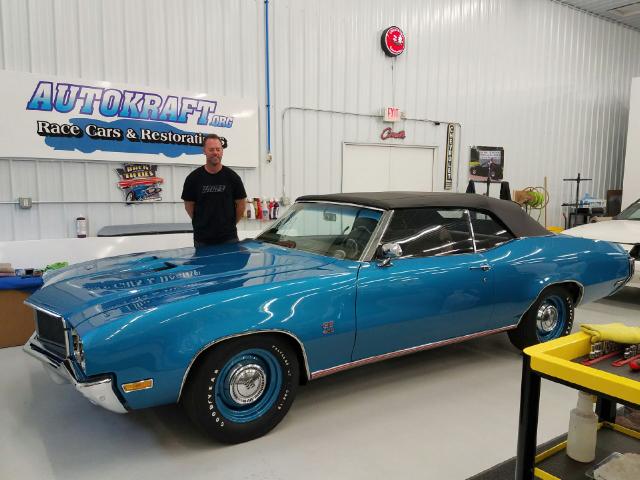 Three-time NHRA Pro Stock champion Jason Line was NOT Anderson’s first customer at Autokraft, but the two are long-time friends, so Line chose Anderson and the Autokraft team to restore his award-winning 1970 Buick GS 455, which was unveiled in November 2017. (Image/Kurt Anderson)

When you build awesome cars and race them really well, people take notice.

Sometimes, those people own dragstrips.

Sometimes, those people who own dragstrips are two-time NHRA champions and two-time winners of the U.S. Nationals.

Long-time drag racer Al Corda owned Rock Falls Raceway in Eau Claire for several years, and got to know young Anderson—the kid in his early twenties who was restoring cherry hot rods AND going rounds driving them on race weekends.

“Kurt is a real craftsman, and honestly, there’s nothing he can’t do,” Corda said in an interview with NMCA Digital in a 2016 article.

Anderson had done plenty to earn his stripes, but once the local track owner and prominent drag-racing figure was going to Anderson to fix and upgrade his cars, the dominoes really started falling.

Anderson Has Many Customers Now 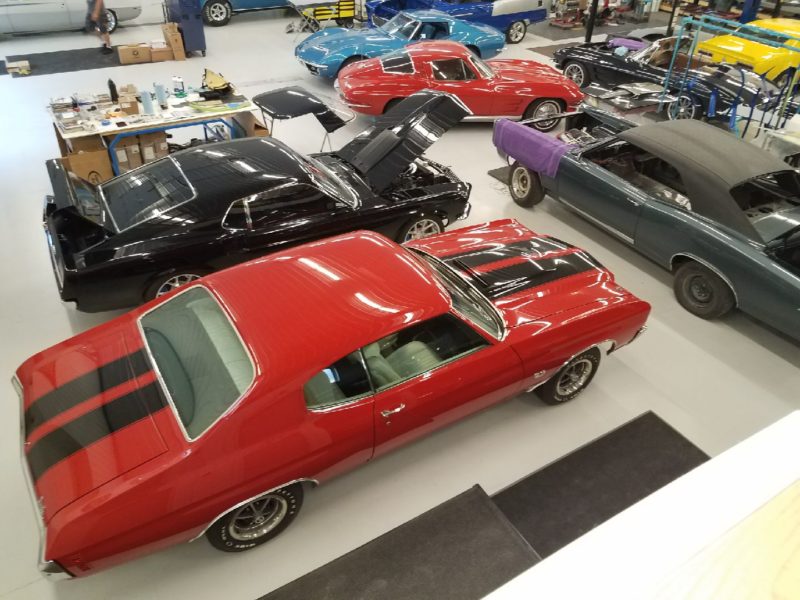 Anderson and Autokraft don’t have to talk about how good they are. Anderson is in the show-me business.

Can he build race cars? Count the hardware.

Can he build killer muscle cars? Try to buy one from him.

And then if anyone needs an exclamation put on it, he spends several weekends per year snatching win lights and going rounds.

The accompanying photos from inside Autokraft tell you pretty much all you need to know about the care and attention to detail which Anderson has made foundational practices and business principles at Autokraft, and which Anderson has held dear since he was fixing Corvettes in the old shop at age 15. 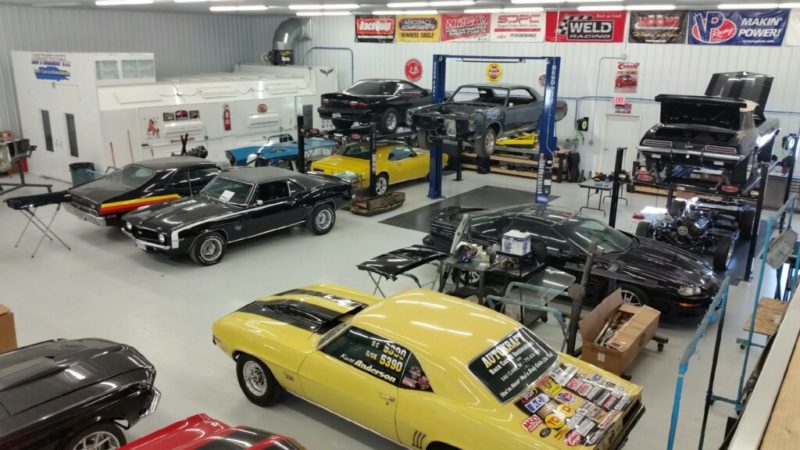 “I love everything we do,” he said. “The race car side, and the restoration side. I’m so fortunate that I have the customers that I do.”

Where does a guy like that go from here? What’s next?

“My ultimate goal is to win two championships in one year,” he said.

He started building cars at age 13 and made his first dragstrip pass when he was 18 in a ‘69 Camaro.

Today, at age 50, he’s still building cars and making passes in a ‘69 Camaro, only his builds are better, and his passes are faster despite launching with a dramatic 45-degree wheelie that has become almost iconic in the NMCA ranks and has been splashed across countless magazine pages over the years.

You can check out his wheelie launches here:

And now the man—a guy with a tireless work ethic and disciplined approach to developing consistency in order to achieve excellence in everything he does—wants championships.

Corda said “honestly, there’s nothing he can’t do.”

We assumed Corda had been talking specifically about Anderson’s car building and restoration work. But now we’re thinking he meant it literally.

Like the rising price of another Anderson-built hot rod that he doesn’t want to sell, this might not work out very well for the other guys.

We’d say good luck, but we don’t think he needs it.

(UPDATE: The day after we published this story, Anderson won the NMCA All-American Nationals in Open Comp, and finished runner-up in Street Kings. So, just in case you were wondering—no, the man’s not playing.) 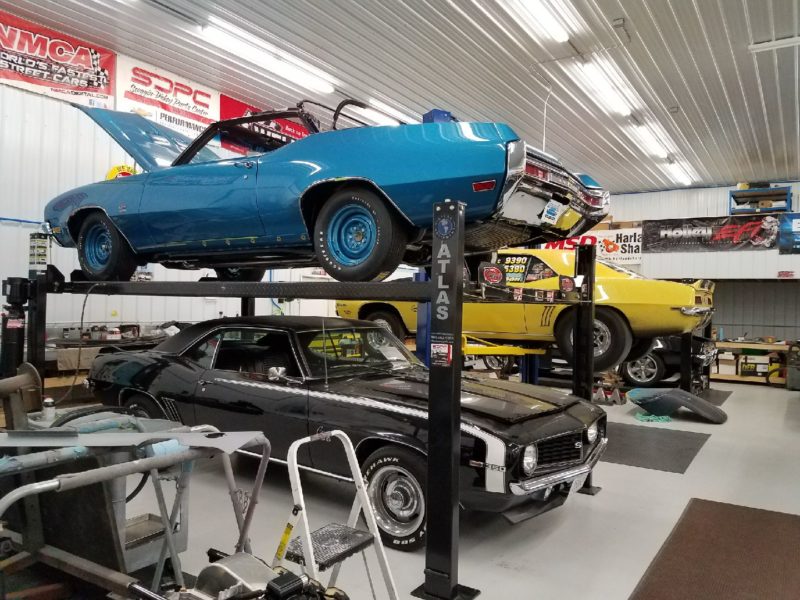 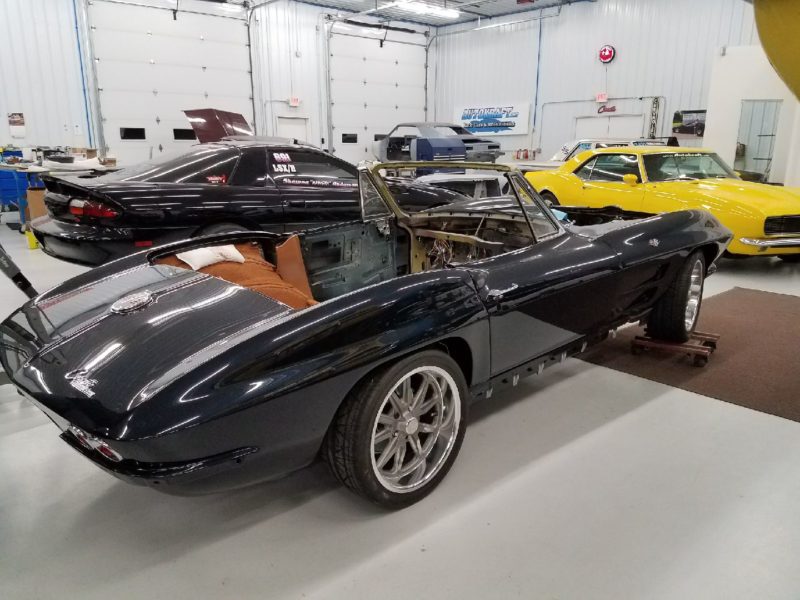 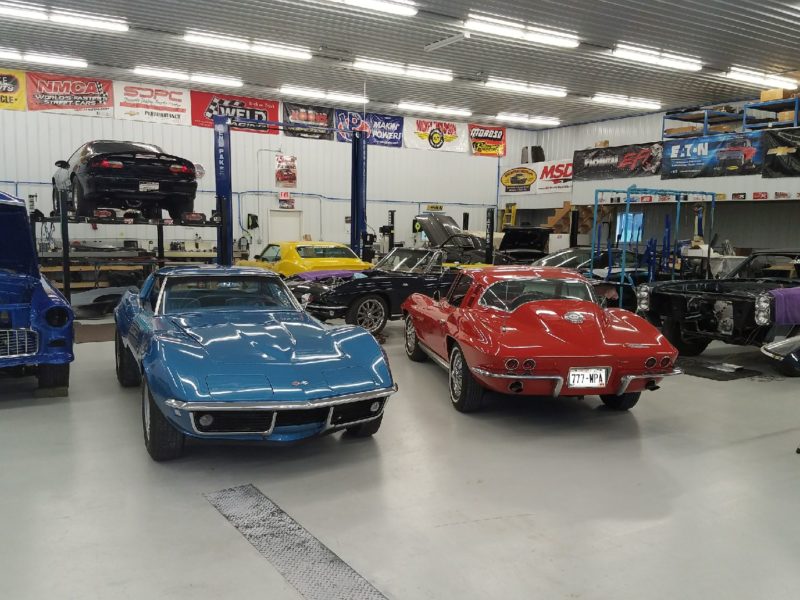 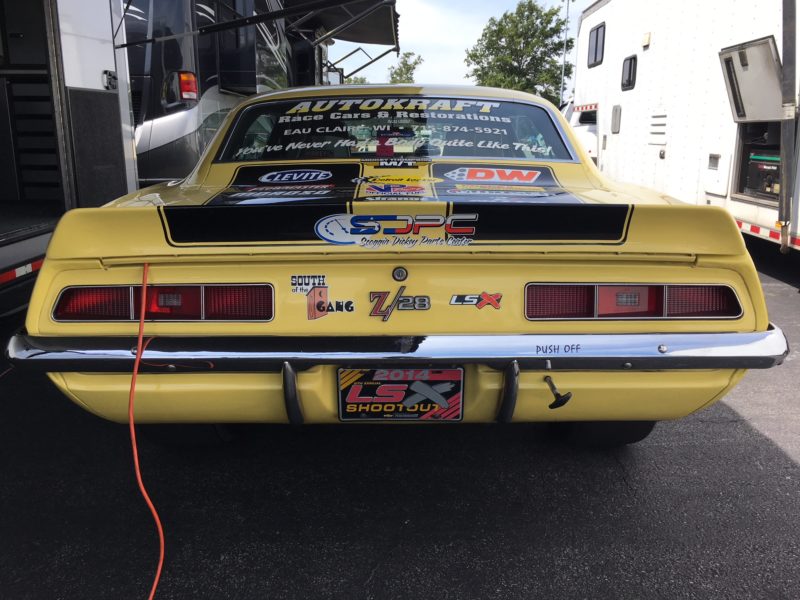 Anderson runs a 9.75 index, so, if necessary, think about this view of his taillights as a metaphor. (Image/OnAllCylinders)

One response to “A ‘Kurt’ of All Trades: Resto Wizard, Master Builder, Racing Champion”