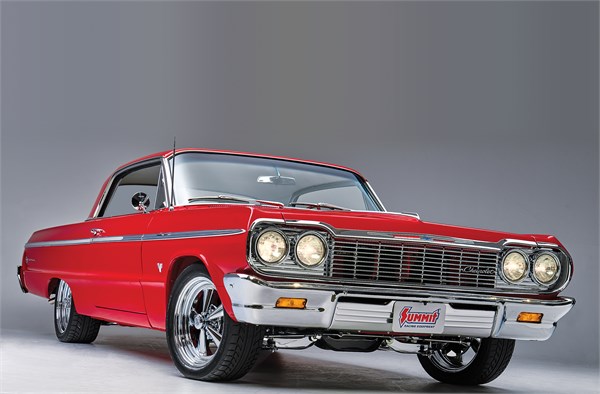 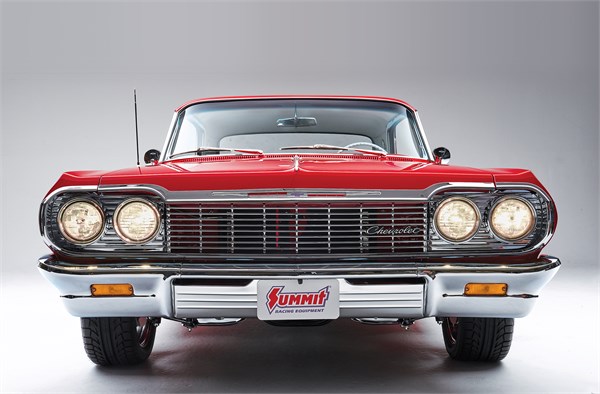 A true diamond from the heart of coal country, Danielle displays the Impala as The Coal Miner’s Daughter—a tribute to her father, who has since retired from the industry.

While the Tackett family has been working diligently on the Impala since 1997, preparations have been underway since the Reagan administration! Starting in the early 1980s, Danny began setting aside NOS (new old stock) trim pieces in hopes of performing a “someday” restoration. One such piece—the vehicle’s massive grille—has been hand polished to a better-than-showroom shine. Any trim pieces that couldn’t be replaced have been painstakingly refurbished by his daughter, Danielle.

What a view! Danny has gone to great lengths to ensure that the Impala shines just as brightly under the hood as it does from the outside. But it’s what you don’t see on this small block that leaves the biggest impression. “I didn’t want to cover up all the polished pieces on the front of the motor,” recalls Danny. “That’s where I got the idea for the clear acrylic fan shroud.” That clever trick provides a perfect view of the Impala’s chromed radiator fan, custom stainless steel hard lines and accessory brackets, and billet aluminum V-belt system without sacrificing drivability

She’s all grown up now, but Danielle was just six years old when she began working on the Impala with her father. Under his guidance, she learned how to refinish the car’s nearly impossible-to-find OEM side molding, hammering out the imperfections and polishing it to a high shine. “You’ve got to go slow and take your time with the polishing wheel,” she said. “Otherwise it’ll get too thin and you’ll ruin the whole piece. You only get one shot!”

The Tackett family is always working to keep the Impala in the winner’s circle. While it’s been running the show circuit since 1997, Danny just recently bolted on a fresh set of 17” Cragar S/S wheels, which better show off the high performance disc brakes hiding just behind the spokes.

Why mess with perfection? Sporting a clean interior from day one, The Tacketts opted to keep it simple, swapping the Impala’s worn upholstery for a set of reproduction seat covers and some fresh red carpet from Classy Chassis Interiors in Bristol, VA

Ask a dozen builders for the definition, and you’ll get a dozen different answers. For some, their car is done when it runs. For others, it’s a wrap after body and paint. Meanwhile, many projects are never truly finished.

For the father-daughter team of Danny and Danielle Tackett, bringing home best of show—the ultimate goal for many—was only the beginning.

At the age of six, Danielle was bitten hard by the car show bug. With a little help from her father (someone had to reach the pedals, after all), she won top honors at her very first show, taking home the prize in her family’s 1964 Impala SS. But that success was short-lived, and Danielle came up empty-handed at her very next event. Undeterred by the disappointing results, she approached her father after the show, insisting, “Daddy, I want a car that wins!” And who could argue?

Danny knew the family’s weekend cruiser was a little too rough around the edges to ever meet his daughter’s requirements, so he turned to the local trader magazines in search of an Impala that could.

“We decided to start fresh because the original car’s body was full of filler. I knew, because I was the one who put it there!” Danny said.

And with a suitable candidate found just up the road in Columbus, OH, the build of Danielle’s prize-winning Chevy began in earnest.

Still sporting its original Ember Red paint and white vinyl interior, this particular 1964 SS is just one of many that the family has owned over the years.

“My dad has always had a place in his heart for Impalas—he got his driver’s license in a ’64,” Danielle said. “And he’d actually been collecting new old stock parts since the 1980s in hopes of one day doing a ‘someday’ restoration.”

No sooner had they driven the Impala back to their garage in Hi Hat, KY, than the body was relieved from the chassis and bolted to the family’s homemade rotisserie. Teresa, Danielle’s mother, was given the messy job of sandblasting away the car’s original paint.

“The sand got everywhere!” Teresa said. “My ears, eyes, everywhere—it was awful!” But all that hard work paid off, revealing straight, filler-free sheet metal underneath.

Without access to a trailer, Danny loaded the bodywork piece-by-piece into the back of the family’s pickup, and carefully delivered them to Solid Gold Classic Chevy in Norton, VA where the Impala’s custom paint was applied. They chose Chevy’s classic Victory Red as a starting point (a shade that appears on everything from work trucks to Corvettes), and added a healthy amount of extra red pigment to produce the brilliant final product.

Meanwhile, Danielle was put in charge of restoring every inch the Impala’s hard-to-find aluminum and stainless steel trim—a huge job for a Danny’s young shop assistant!

“We called around, and the shops wanted $65 an hour to refinish the trim,” Danny said. “And with all the trim on the car, there’s just no way we could afford that, so we decided to learn how to do it ourselves.”

Over a year of evenings and weekends, Danielle meticulously hammered out the dents and polished each piece of trim to shining perfection.

“It wasn’t easy—some of those pieces were taller than I was,” she said. “And the buffing wheel shot more than one piece over our heads while we were learning.”

With Danielle and Teresa hard at work restoring the car’s exterior, Danny set his sights on the driveline.

“The car was a driver, but the engine needed some attention,” he said. “I still have the original engine in the garage, but it was actually cheaper to buy a new crate engine than to do a rebuild—and a lot less work!”

The new power plant is a factory-fresh 350/290 Deluxe from Chevrolet Performance—a popular choice among hot rod builders thanks to its respectable power and budget-friendly price tag. But for Danny, the real draw of Chevy’s venerable small block was its nearly unlimited potential for custom modification.

Rather than getting hung up on improving the engine’s ability to turn the rear wheels, Danny doubled down on ensuring the engine would turn plenty of heads, wrapping nearly all 350 of its cubic inches in polished stainless steel and gleaming chrome.

“I wasn’t always intending to make the engine a showpiece,” Danny said. “But I’d fix up one part, then another, then another.”

“And now it’s almost too nice to drive!” Danielle interjected.

Of all the visual upgrades—including polished hard lines, smoothed exhaust manifolds, and a one-of-a-kind clear Plexiglas fan shroud—the family agrees that the custom-engraved air cleaner and valve covers are their favorite.

“At the time, it seemed like everyone had flames, so we wanted something different,” Danny said. “The manufacturer said they could put anything we liked on there, as long as we provided a CNC drawing. So I had one made up with Danielle’s name in the center of the air cleaner—and it was actually her idea to add her mother and my name to the valve covers.”

In sharp contrast to that underhood razzle dazzle, the interior accommodations are a more restrained affair. Staying true to the coupe’s original upholstery, the seats were refreshed with a set of new white vinyl covers, and the Impala’s 50-year-old carpet was replaced, both thanks to Darryl Livingston at Classy Chassis Interiors in Bristol, VA. For her listening pleasure, Danielle hid a Pioneer stereo head unit and upgraded speakers under the front seats.

This is usually the point in the story where the car gets buttoned up, ultimately fulfilling some well-deserving enthusiast’s childhood dream. And while—after 10 years of careful restoration and painstaking attention to detail—the Tacketts’ Impala was finally ready for prime time, the story isn’t quite over.

Danielle (now nearly old enough to drive!) and her father selected the 2007 Super Chevy Show in Bristol, TN for the Impala’s grand unveiling. Unsurprisingly it garnered overwhelming praise from the attendees and grazed perfection among the judges. However, one bit of criticism spoiled the moment:

“This car would be really nice if you finished it,” one judge commented, pointing out a spot of orange peel under the hood.

“I had too much time in the car to leave it unfinished,” Danny said. “After Bristol we took the entire front end apart, then sanded and polished everything. The underside of the hood and trunk, the inner fenders, under the console. Everything.”

And so went the story for over the next five years. Whenever and wherever the judges found fault with the Impala, the Tacketts picked up their tools and fixed the issue. No piece of criticism went unaddressed. Then it happened—Danielle scored a perfect 1,000 points at the 2012 Music City Chevy Show in Nashville.

“It was amazing,” she said. “We often get parked next to million-dollar cars, but we’re always just happy to be there. Scoring 1,000 points was something else.”

“We’ve been really blessed with the success we’ve had,” Danny added.

So that perfect score closes the book on this Impala, right? Of course not! As the Tackett family knows, there’s always more work to be done on a showstopper like this. But now they have another set of helping hands. Tommy Bentley, Danielle’s fiancé, has since joined cause, taking on the never-ending task of keeping all 17 ½ feet of the Impala concourse-ready.

With this Impala’s build clocking in at 20 years and showing no signs of stopping, there’s a very good chance the car will never be “done.” In fact, after a little cajoling from Tommy, Danny just recently upgraded the rolling gear to the set of 17-inch S/S wheels you see pictured here. And that slow and steady approach is perfectly fine with Danielle.

“The best part has been all the time I’ve been able to spend with my dad, and everything he’s taught me along the way,” she said. “I’ll be getting married soon and I want to pass all of that along to my own family.”

And that begs the question: when building an award-winning muscle car brings a family together, why would you ever want to finish?