Each participant needs to get his or her street legal racecar to the official check-in, get it approved for both race and street use, race it at the track, drive several hundred miles to the next track, and repeat the process for five consecutive days.

Now, imagine shipping your car across the ocean to do that.

That’s exactly what Christian Damgaard and a few friends did.

“We talked about it for a couple years,” Damgaard said at Summit Motorsports Park Tuesday for the second stop of Drag Week 2016. “I found out I wanted to cruise across the states – take Route 66 coast to coast. Then I saw the Hot Rod Power Tour and said ‘someday I’m going to do that.’ Then I saw Drag Week and said, ‘that’s the one.’”

Driving across the country or participating in an event like Drag Week are goals many car fans have dreamed of. But they’re a lot tougher to pull off when you live in Denmark, which doesn’t even have a drag strip.

The distance to Columbus, OH, where Drag Week 2016 began, was much further.

Damgaard spent $5,000 to ship his car and trailer to the United States (return shipping not included). Two of Damgaard’s friends, Brian Petersen and Jan Kisling, also shipped their cars and trailers, and the trio flew to the states a month ago to unpack everything. They returned two weeks ago to start preparing for Drag Week. Additional friends and family tagged along, bringing the Danish group to about 30 people. They’re easy to spot at Drag Week, because they sport matching shirts. They also sport three beautiful American hot rods: a 1980 Corvette, a 1934 Ford 3-Window Coupe, and Damgaard’s 1971 Chevy Impala (see pictures in the slideshow at the bottom of the story).

Damgaard has owned his ‘71 Impala with a ’73 front end for 23 years, but he remembers the day he first got the racing bug.

“A friend of mine across the street was an apprentice, and had a ’66 GTO with a 454,” Damgaard said. “I was 18 years old. We filled it up at a gas station and he let me drive it. Both mufflers were rusted out. But I stepped on it. It just screamed, smoke blew off the tires and it left black marks on the road. I pulled out of the gas station and was in the left lane with the blinker still on. I needed a new pair of underwear. I said to myself, ‘I’m never going to do this again!’ Then, a few hundred feet later I said, ‘yes I am!’”

Damgaard has loved cars since and, as you might have guessed, has invested heavily in his ’71 Impala.

“It has lots of Summit Racing stuff in it,” he said. “When I open the hood, every fitting you’ll see says Summit Racing.”

His customized trailer isn’t too shabby, either.

“We heard Americans like to sit around at car shows, so we built the trailer with things so we can sit around.”

That includes a radio and 10 speakers, refrigerator, flip-down work table, and external lights. The trailer is solar-powered with battery back-up. Damgaard pulls it behind his Impala during Drag Week.

So what’s next for the Danish group?

After they finish Drag Week, they’re heading to North Carolina for the Super Chevy Show Series at Rockingham Dragway. They also plan to attend the Orlando World Street Nationals.

In the meantime, Damgaard says he plans to make a stop by the Summit Racing Equipment Retail Store in McDonough, GA for the Sep. 26 Monday Night Cruise-In.

Look for the Danish guy with the 11-second car and fancy trailer sitting around the car show. 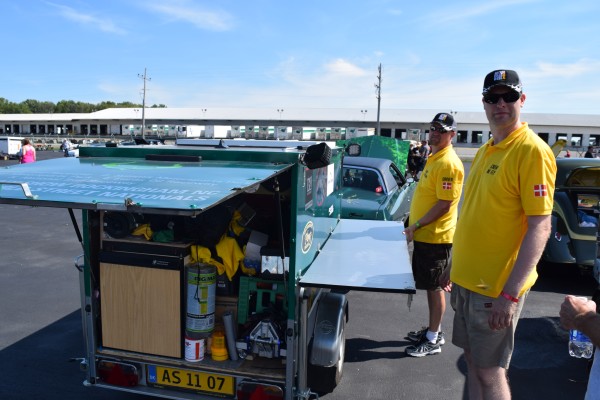 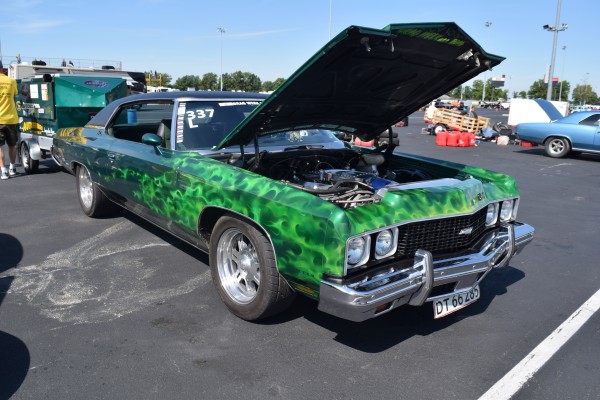