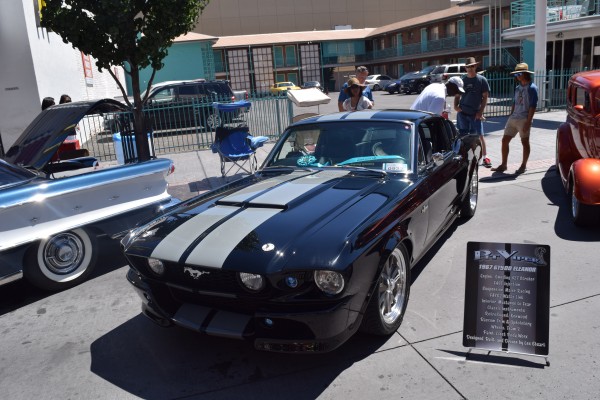 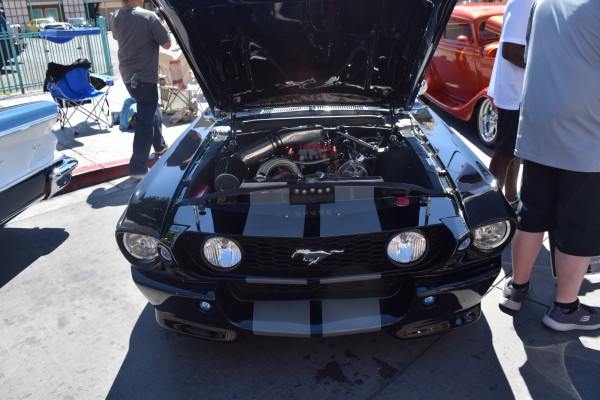 RENO, NV. — Don’t call Les Stuart’s 1967 Mustang GT500 “Eleanor.” It has its own name, thank you very much. And while you may also be tempted to call Stuart’s “Pit Viper” GT500 an Eleanor clone, that label doesn’t do it justice either.

“A lot of people clone Eleanor, but Eleanor can be a much better car,” Stuart said. “This is not a version of the movie car, and that’s fine because I didn’t want an exact version of the movie car. They made 27 models of Eleanor for the movie, and it was just made for the movie so a lot of stuff was bolted on. So there’s a lot of differences between a car that’s really going to be driven and a car that’s made for a movie.”

And that’s a key point with Stuart’s car. It was made to be driven.

Pit Viper was born about eight years ago when Stuart tracked down what was essentially a blank canvas for his build. It took him nearly 14 months of searching, but he located the perfect shell for his ’67 in nearby Sacramento, CA. The car had no glass, no interior, no transmission, no engine, and no wiring — but it was rust-free and straight.

“It was hard to find something because I didn’t want someone else’s work,” Stuart said.

“I made a copy of that, blew it up, and wrote ‘inspiration’ on the bottom of it, and posted it on the inside of my garage,” Stuart said.

That rendering may have been the inspiration for his build, but unlike the original Eleanor, Stuart’s Mustang wasn’t going to be built for Hollywood. It was made for navigating the mountains of Northern California or making a road trip to Hot August Nights.

“I wasn’t going to build a show car,” Stuart said. “I wanted something to drive and that was my primary focus in building this car. I invested, not necessarily a lot of money, but a lot of time in the suspension and steering and handling side of things. This thing, underneath, has got stuff you won’t see on any other Mustang.”

Stuart went to Maier Racing, a vintage Mustang performance company that focuses on fiberglass and suspension components for Autocross and road racing. The company helped him put together a custom suspension package that includes a FAYS2 Watts Link system similar to those used on the SCCA circuit. Other suspension pieces include tubular subframe connectors for added strength over boxed subframe connectors. Reinforced, custom-built control arms provide added rigidity and stability, and a unique split-leaf spring setup (five springs up front and three in the rear) resists wheel hop and prevents the car from squatting during hard launch or acceleration.

Stuart sandblasted the body shell down to bare metal in his two-car garage to locate and repair any trouble spots. He ordered the Eleanor body kit, but opted to go with a Mustang-style GT hood instead of the Eleanor hood.

“The thing about Eleanor is the hood is not a Ford hood,” he said. “I believe it’s a Corvette Stingray hood.”

Using trial and error (“I ordered four grilles from eBay,” he said.), Stuart fabricated a custom front grille based off a 2005 Mustang GT grille and then built a one-off trim piece to dress up the front of the engine bay. He also rebuilt the trunk interior to give it a cleaner appearance and finished off the back-end with 1968 Mercury Cougar taillights. He then tasked Fleet Body Worx in San Jose, CA with laying down the GT500’s beautiful paint and racing stripes.

“What I’d do is I’d figure out what I wanted, get the part number, and then put it into SummitRacing.com — bam,” he said. “I’ve done that throughout with just about everything. My instrument cluster, my Retrosound radio, the wiring harness, battery box, kill switch — I could go on and on!”

Unlike the side-exit exhaust you see on most reproductions, the Flowmaster exhaust system on Stuart’s car is completely functional. He drilled a three-inch hole through the frame rail and torque box, added three-inch sleeving, and then routed the 2.5-inch exhaust pipe to the tips on the side of the vehicle. The exhaust system’s X-pipe was also outfitted with electric cut-outs, which gives Stuart the option of dumping the exhaust straight down right after the headers. By toggling back and forth, he’s able to drastically alter the tone and attitude of the car.

The interior features a brand new console with Classic Instruments gauges and RetroSound stereo system, seats and other interior components from Mustangs to Fear, and upholstery by Bascom Trim and Upholstery in Santa Clara, CA.

Sounds like Pit Viper got its own Hollywood ending.